On March 3rd, the world of music lost one of its pivotal figures. Norman 'Hurricane' Smith recorded the Beatles' first six albums, produced the first four Pink Floyd LPs and even enjoyed chart success in his own right. 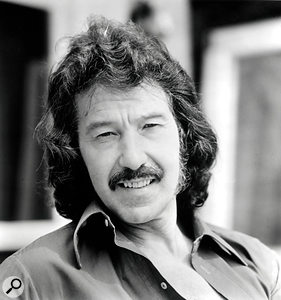 In his 'Hurricane' alter ego, Norman Smith went on to have several solo hits as an artist in his own right.Photo: EMI"With The Beatles we're talking about something really melodic, whereas with Pink Floyd, bless them, I can't really say the same thing for the majority of their material. 'A mood creation through sound' is the best way that I could describe Floyd." So said Norman Smith when I spoke to him a decade ago about his work with two of rock music's most influential bands.

In 1959, while struggling as a session pianist and drummer, Smith had landed a job as a recording assistant at the EMI Studios on Abbey Road. "I had to start right at the bottom as a gofer, but I kept my eyes and ears open, I learned very quickly, and it wasn't long before I got onto the mixing desk," he said. "In those days every prospective artist that came in had to have a recording test, and that's what we started doing as engineers, because we couldn't really cock anything up. Normally, each of the producers at EMI had their own assistants and they would be the ones to keep an eye on the potential talent, and that's what I was doing when one day this group with funny haircuts came in."

Cue John, Paul, George and Pete Best, who, having been rejected by virtually every UK label, turned up for a Parlophone audition in EMI's Studio 2 on Wednesday, June 6, 1962.

"The Beatles didn't make a very good impression, apart from visually," Smith said. "I mean, we heard nothing of John and Paul's songwriting ability. They had tiny little Vox amplifiers and speakers, which didn't create much of a sound at source. Of course, every sound engineer wants some kind of sound at source that he can then embellish and improve, but I got nothing out of The Beatles' equipment except for a load of noise, hum and goodness–knows–what. Paul's was about the worst — in those days we had echo chambers to add onto the reverberation, and I had to raid the Studio 2 echo chamber in order to fix him up with a sound so that we could get something down on tape."

What went down on tape was just about promising enough to pique George Martin's interest, securing them a contract that soon resulted in the recording of their first album, Please Please Me. The four songs of their first two singles were augmented by another 10 tracks, captured in just under 10 hours.

"I really don't know how the Beatles' voices held out for that entire session," Smith stated. "In fact, John's very nearly didn't for the last number, 'Twist And Shout'. Paul found it pretty easy to sing, but John was always under a bit of strain, given the timbre of his voice. I remember they did have a large jar of cough lozenges — Zubes — as well as a carton of cigarettes, and he just went for it. Due to the state of his voice we knew we had to get 'Twist And Shout' in one take, and fortunately we did. There again, if you listen to it, perhaps the sore throat and the hoarseness improved the performance. It's a terrific performance.

"Up until the time when I became a sound engineer the other engineers would always use screens. Everything was screened off so that the separation was good on each mic, but I didn't like that idea for the Beatles once it had been decided that I was going to record them. I wanted to set them up the way that they looked, in line with their attitude and how they approached things, and it seemed to me that they would be far happier if they were set up in the studio as though they were playing a live gig. I therefore threw all of the screens away, and the Abbey Road management warned me that I was taking a little bit of a chance, but the Beatles performed as they did on stage, and although the separation on each mic wasn't terribly good, it did contribute to the overall sound. We also got a bit of splashback from the walls and the ambience of the actual studio, and in my view that helped create what the press dubbed the 'Mersey Sound'. I'd receive phone calls and letters from America asking how I managed to get all of that sound on tape.

"You see, as far as my side of it was concerned — and all of the other engineers, for that matter — we were sort of restricted. The material had to be transferred from tape onto acetate, and therefore certain frequencies were very difficult for the cutter to get onto disc. I mean, if we did, for instance, slam on a lot of bass, it would only be a problem when it got up to the cutting room, but at the same time we were all a little bit frustrated that we couldn't get certain kinds of sounds that we would have liked. Instruments like the sitar were terribly, terribly difficult to record, due to the range of sound frequencies — the meter would be bashing over into the red, and so you didn't get any value for money." 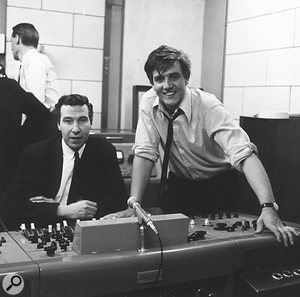 A young Norman Smith (right) working with Billy J Kramer at Abbey Road in 1964.Photo: John Dove/EMIWith Rubber Soul came more sophisticated songwriting, but Smith also saw a change in attitude. This, along with increasing friction between John and Paul, caused him to quit working with the biggest band in the world to become an EMI in–house producer.

"Up to that time we'd had a kind of family setup between the four guys, George, and myself," he remarked. "It was superb, and you can probably imagine what a great time it was to be part of all that. Also — and I don't want to take anything away from anyone — production of the Beatles was very simple, because it was ready–made. Paul was a very great influence in terms of the production, especially in terms of George Harrison's guitar solos and Ringo's drumming. It was almost like we had one producer up in the control room and another producer down in the studio, and of course John Lennon also knew what sounds he wanted."

Although Smith was still able to dabble behind the console after moving into production, once he began working with an underground, London–based, psychedelic rock outfit known as the Pink Floyd in early 1967, he "had too many other things to worry about such as Syd Barrett". And, having first seen the band at London's UFO Club, he also had to get to grips with their material.

"I can't in all honesty say that the music meant anything at all to me," he confessed. "In fact, I could barely call it music, given my background as a jazz musician and the musical experience that I'd had with the Beatles. Still, there was something about Syd Barrett's songs that was indescribable — they were nondescript, but obviously had that Barrett magic for an awful lot of people. Nevertheless, I got along as well as anybody could with Syd Barrett. He really was in control. He was the only one doing any writing, he was the only one who I as a producer had to convince if I had any ideas, but the trouble with Syd was that he would agree with almost everything I said and then go back in and do exactly the same bloody thing again! I was really getting nowhere.

"I never actually saw Syd taking drugs in the studio, but he had the kind of character that, even if he hadn't taken any, you'd think he was on drugs. He was a peculiar person. You couldn't really hold a sensible conversation with him for longer than 30 seconds. Roger Waters had the best rapport with Syd, but even he found it difficult. I remember them being on [BBC TV's] Top Of The Pops with 'See Emily Play', and beforehand I took them into Number One Studio purely to rehearse what they would do on television for the first time. I was almost choreographing them, silly little old me, thinking they would actually stick with my choreography! Of course, that all went out of the window, thanks to Syd.

"He wasn't happy about doing Top Of The Pops; he didn't like singles — he only liked doing albums — and it was while waiting around for an appearance on [BBC Radio's] Saturday Club that he walked out of the door and went missing. That really was the first sign of his complete mental breakdown, and he never did come back into the studio any more after that, meaning that I had a hell of a hard time with the recordings."

"As musicians, the Floyd were capable enough, but again Nick Mason would be the first to agree that he was no kind of technical drummer. In fact, I remember recording a number — I can't now recall which one — and there had to be a drum roll, and of course he didn't have a clue what to do. I had been a drummer, and so I had to do that. Nick was no threat to Buddy Rich! Roger Waters, on the other hand, was an adequate bass player for what they did, but to be honest he used to make more interesting noises with his mouth. He had a ridiculous repertoire of mouth noises, and we used that on one or two things.

"So, they were capable, but I had a great struggle with them after Syd Barrett went funny and left. They tried very hard to write material — I remember them writing a song about apples and oranges, which I dressed up and released as a single, and that sold about six copies. It was around the time of the Saucerful Of Secrets album, and I really did think that it was all over. We still had to keep the singles coming for the audience that they had established, but the songs that were being composed by the other three guys were, to say the least, lacking in commerciality. Their recording career was going down the drain fast, and then along came Dave Gilmour and things started to pick up again."

After producing 1970's Atom Heart Mother, Norman Smith was the executive producer of Meddle the following year, yet he was about to exit the Pink Floyd story.

"These guys now knew what they wanted, and so it was silly for me to contribute any more," he explained. "I thought I'd done my bit with them and encouraged them to produce themselves — they were producing tape loops at home and bringing them in to me — as well as to be resourceful in the studio. Having done that, it was time for me to retire gracefully and offer to help them if they needed my advice at any time. However, they didn't, because Roger Waters — a bit like Paul McCartney — had the makings of being a good producer, and Dave Gilmour showed this ability as well, and I personally think that the two of them together were a greater force than Syd Barrett ever was. They were able to get back to what Pink Floyd was all about, and the rest is history."