The Man Behind The Brand
By Dave Lockwood

Phil Dudderidge took back the role of Managing Director from Simon Blackwood in 2007, who had joined in that role in 1997, and recalls the period that followed with a particular fondness. “We were having incredible growth and success, and I particularly enjoyed being closely involved again during those years but I also felt we needed to put some succession planning in place. Dave Froker — the same guy I dealt with back at the start of our association with Digidesign — joined us as CEO in 2012 and I became Executive Chairman. Dave did a great job. He came to us with a huge amount of experience, at Avid, the Stanton Group and later Line 6, and worked closely with me and the rest of the management team on our IPO (Initial Public Offering). Dave was with us for five years before deciding to retire and return to San Francisco where his family is from.

“Tim Carroll, who became Dave’s successor as our CEO, actually worked for Dave Froker at Avid back in the early 2000s, and had risen to a very senior position, effectively acting as the head of the audio division, before he joined us. I can’t think of anyone in our industry whose experience would have made them better equipped than Tim. He’s a very bright guy who leads from the front, and we are very fortunate to have him.

The heart of the business is still the continued organic growth of the Focusrite and Novation brands, but we do also have serious ambition to make a strategic acquisition.

Having a CEO means that I don’t have a day-to-day management responsibility — I preside over the PLC board, and work with Tim and our CFO Jeremy Wilson on our plans for the future. The heart of the business is still the continued organic growth of the Focusrite and Novation brands, but we do also have serious ambition to make a strategic acquisition of some good adjacent technologies in the next few years*. The structure of the business is such that the public company is a holding company with Focusrite as its sole subsidiary, so that allows us to contemplate buying a business of some size and standing that could fit under that structure, not being absorbed into Focusrite the operating company, but sitting alongside it as an equal partner. 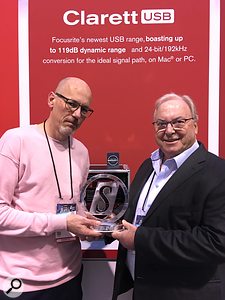 Sound On Sound's Sam Inglis hands over another reader-voted SOS award to Phil Dudderidge.“Under Tim’s leadership, we’ve actually ‘divisionalised’thebusiness now,and created Focusrite Pro as a sales, marketing and development division of the company, which means we no longer have the same people trying to address both the professional and consumer markets. Our Clarett interfaces might be seen as the transition between the consumer and professional worlds, used a lot by people who would describe themselves as professional rather than ‘prosumer’, but I’m not one for drawing hard lines between market segments. I think there is a continuum from the amateur musician right through to the highest-level professional, and that continuum is usually just based on factors of time and success.”

Focusrite’s RedNet digital audio networking sub-brand forms the major component of the Focusrite Pro division. Phil Dudderidge explains its provenance: “RedNet started with Rob Jenkins recognising the potential shortcomings and limited lifespan of Firewire and being approached by the Australian company Audinate, the original developers of the Dante protocol. They had some prototype boards, but they were still developing the software. Their initial market was seen as live sound and install applications, but Rob saw the potential for it to be extended into the recording world if they made some changes. We spent the first few years of our relationship defining what they needed to do to make it work in real-time in a recording situation, and being able to overdub, etc. We saw the potential of low-latency networked audio in professional environments such as multi-room studios, as well as at the level of our existing ‘professional project studios’ and upwards, but there’s actually a lot more potential than we realised. We were initially focussed on the market we knew — recording, pro-level project studios and above, so this wasn’t going to be a project for the masses. Maybe one day, as the cost comes down, it has the potential to just clean up the studio by removing wiring, but ten years ago that wasn’t the centre of our attention. We definitely had a strategic desire to move back up into professional circles with our product range and not remain headed solely downmarket — having started at the top end of the market, we had no particular desire to leave it.” 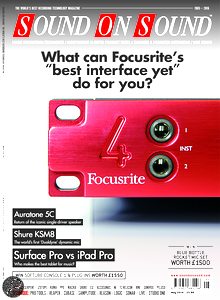 Focusrite describe the Red 4Pre as the pinnacle of their audio interface range.

“Employees are what make a business”

“Employees are what make a business, and we now have quite a substantial team of both hardware and software engineers. There are some key people who have been with us for decades and who have played key roles in the direction of the business, although of course we have to be careful never to be too dependent on a single individual. We have about 80 people in our development departments now, out of a total of something like 185 in the business in the UK including a software team based at Tileyard in London, where we have 14 who work on our very successful Ampify apps and other software, and we have a few more software people who work remotely in this country and abroad. We also have our subsidiaries in the USA for marketing, where we have about 33 people now. We have a substantial customer support department there in Los Angeles, as we do here in the UK and in Hong Kong — we are endeavouring to provide ‘follow the sun’ support, without running any one office 24 hours a day.”

I can’t see the sun setting on Focusrite any time soon, nor indeed on the man himself. In his own words: “I have no particular thoughts of retirement. I think if you asked most people approaching the age of 65 it is almost programmed into them that they ought to be retiring, but I’m now 70, and still feeling much as I did when I was 65. I enjoy overseeing the business: when it goes well, it is a very satisfying thing to do”

* As this piece was being prepared Focusrite announced the acquisition of leading studio monitor company, ADAM Audio GmbH of Berlin, Germany.