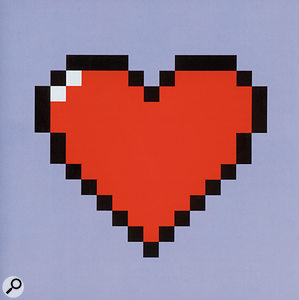 Pixelh8 The Boy With The Digital Heart

If you thought programming music on a Yamaha QY70 or an old Akai MPC was time–consuming, just think how fiddly it must be to do it on a Game Boy! But that’s what Matthew C Applegate, aka Pixelh8, has done on The Boy With The Digital Heart, an electro–pop album of real songs made up of bleeps and boinks. But, you may ask, why bother? What’s the point? I don’t want to enter into a debate about why people choose to create music on unconventional platforms, but the obvious retort is: why not?

Musically, the tracks are very clever, and it’s not all Tetris; there’s drums, bass, harmonic and melodic sounds, and they’ve all been created using what is obviously fairly basic synthesis. All in all, it sounds like synth–pop should, just a bit more computer game–y. One reservation I have is that the songs are quite repetitious. Even though they’re mostly around the three–minute mark, they soon get a little tiresome. They are, of course, instrumental, but even so, they could have been more interesting, or just shorter.

Of course, Pixelh8 could introduce some vocals, and this would certainly add interest to the songs (though it might lose him some credibility among Game Boy geeks). I can easily imagine a cutesy female singer like Kate Nash or Lily Allen (when she’s not whingeing) singing some fun little lyrics over the top. Chris Mayes–Wright

Euphonika might well have been CD of the Month, but for the fact that Troy Banarzi already has an Arts Council grant to fund its production. There’s a lot of inverse snobbery and Philistinism around subsidised art, and a tendency to dismiss projects like Euphonika as pretentious or difficult. All I can say is that if you do so, you’re missing a treat.

The CD originated as the soundtrack to a “quasi–theatrical sound and vision performance”, yet, unlike much ‘soundtrack’ music, it feels perfectly complete even without the visual or dramatic elements. There’s a folk influence and a fairy–tale quality to Banarzi’s style of composition; often dark, yet always accessible, it expertly balances a string quartet against other instruments more associated with pop, such as the Hammond organ. Several of the pieces are overlaid with lengthy speech samples, and on the second track, ‘Mother Machine’, the results are truly spine–chilling, even if some of the others stray slightly too far into schlock–horror territory to be as effective.

It’s also beautifully recorded. ‘Toy’ instruments such as the melodica often come over as irritating novelties, but in this case they convey exactly the right blend of gaucheness and menace. I always like to hear string players who can bring out the potential of their instruments for brutality as well as sweetness and light, and the in–your–face sound suits the music perfectly. In a word: stunning. Sam Inglis 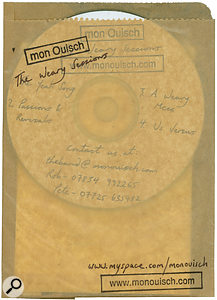 Mon Ouisch’s four–track demo probably cost them about sixpence to put together, but with the help of a rubber stamp, a paper bag, nice handwriting and a bit of imagination, they’ve created something that stands out from the crowd. All that time spent in front of Blue Peter obviously hasn’t gone to waste.

I was expecting their music to be as minimal and low–key as their packaging, but far from it. Like so many indie bands these days, mon Ouisch hark back to the golden age of punk and new wave. Instead of joining in the collective worship of Gang of Four or Joy Division, though, theirs is an impassioned and intelligent racket that recalls the righteous anger of the Adverts or Stiff Little Fingers. It’s still as retro as you can get without actually serving Spangles, but it’s refreshing to hear a band set about their instruments with so much urgency and so little irony or self–conscious cool. Oh, and they have some decent songs, too, which is even better. Sam Inglis

Sound On Sound are proud to feature Breed Media as the sponsor of Playback. Each month, Breed Media will be giving away a run of 1000 CDs to the lucky winner. This amazing prize will be professionally pressed by Breed Media, and includes glass mastering, full colour print, cases and delivery — worth over £700.

This month's winners are Pixelh8.