300ft Gorilla are a rock band from Newcastle whose album showcases a range of styles, covering pretty much every sub-genre of rock to have charted since 1990. They've obviously got a bit of a grunge bias, but they borrow enough from other styles to avoid sounding like the cover band to a Seattle act you've never heard of. In fact, despite the easily identifiable influences (they mention Alice In Chains and Jane's Addiction, which basically hits the nail on the head), their sound is more contemporary than you'd expect.

The mix of traditional rock vocals and funk-metal riffs works well, though they occasionally sound a bit too similar to Audioslave for comfort. Probably their most successful tracks will be the ones that sit somewhere between grunge and nu-metal, but stop short of being an emo whinge-fest. The simple vocal melodies work well against busy guitar riffs on tracks like 'Is Over', and there's enough attitude in the music to make the radio-friendly hooks palatable to all but the most die-hard rock fans.

They play very well and, importantly, they've got a knack for turning good riffs and melodies into good songs. While some of those riffs and melodies could hardly be called original, they do pull it off well, and the punchy-but-not-too-polished production certainly does them justice. Chris Korff

Time For The Turning

Bryan Ferry lookalike Kalichi is clearly into New Age spirituality in a big way. I'm not, and I always struggle to judge music like this independently of the philosophy behind it. Maybe it's not possible to separate the two: there's a certain inevitability about the way the New Age mentality leads to drippy ambient folk music and songs about large bodies of water, and so it proves here.

My feeling is that if this sort of meandering, down-tempo stuff is ever going to escape from the Buddhist temples and make an impact in the wider world, it needs to be so gorgeous and lush that the average listener can ignore all that wittering on about shorelines and focus on how great it sounds. And while Kalichi's album is not unpleasant to listen to by any means, it's nothing special in that regard. I think more could be done in the production department to help his singing, which is prosaic at best, with a sometimes shaky grasp of melody. Likewise, acoustic guitars don't shine, and although the percussion is serviceably recorded, it lacks the glorious low-end bloom that bodhrans and African drums can produce in the right space. As a result, with the exception of some sparky fiddle playing from Gerry O'Connor, it all sounds a bit flat and lifeless. Sam Inglis

Adding to a cerebral batch of demos this month are The Scottish Enlightenment, who describe themselves in oxymoronic fashion as 'alt.indie'. That turns out to mean that they sound like Pavement, only without the sense of humour. Apparently, they also dabble in "existentialist thinking", but alas, their contribution to philosophy is at risk of being lost unless they improve their diction: I could barely make out a word of the opening track, 'Eyes'.

That song does at least offer the consolation of some nice dual-guitar riffing, of the sort that music journalists are contractually obliged to refer to as 'angular'. Even so, it feels stretched at four minutes long, and the other two tune-free tracks on the CD make for a bit of an endurance test. The Scottish Enlightenment's musings on the random nature of existence may be profound, but they would be a lot more listenable if they were paired with something resembling a musical hook. Sam Inglis

American trio the Buoyrockers have been playing together since they were teenagers. Their sound is very 'East Coast North America': many of their songs have distinctly tongue-in-cheek lyrics, in a Barenaked Ladies way, and folky-blues chord progressions are plentiful. They'd be great live, I bet. But, and this is a big but, the album seems to have been recorded at four different locations, and I'm willing to blame the amount of Air Miles this project has racked up for losing some of the 'tightness' that this genre requires.

For instance, the drums sound as though they're a good 30ms behind the rest of the band, perhaps as a result of being added after the main tracking session. What's more, it's almost as if the whole drum mix has been encoded as an MP3 — possibly to be sent in an email. The cymbals and hi-hats have lost almost all of their definition, and all the songs that feature drums really drag, instead of being driven along by the drummer. Also, as a right-handed drummer, it really bugs me when the drums are panned the 'wrong' way around, with the hi-hat on the right — I had to turn my headphones around!

All the tracks feature piano, but although it's well played, the piano sound is very heavily compressed. Whether that's the fault of the sound module or digital piano that's being used or the production processes on the track, a real piano (or a more realistic-sounding one) should certainly be a consideration for the second album, which I'm informed is in progress.

For me, the highlights are the tracks without drums. 'Searching' features the trio accompanied by a string quartet and a female backing vocalist. It's fantastically arranged and recorded, and really quite nice. The final track, 'Island Sunset' is almost like a modern-day sea shanty, and I'm sure is a great set-ender for the Buoyrockers. Chris Mayes-Wright

Bournemouth-based rock band Ten To Never have at least one committed fan. In fact, so enthusiastic is venue manager Kat Drew, from Poole, that she's taken it upon herself to send out demo copies of their EP. That sort of relationship is a great asset for any band, and not just because Kat writes a nice letter; people on the receiving end of TTN's demos will take them just that bit more seriously if they've been singled out by someone who works in the business and sees new bands every night of the week.

It's pretty obvious why Kat likes them, because there's an effortless self-assurance about Ten To Never that would mark them out from any crowd of local bands. They're all good musicians, but what's most impressive is their dynamic as a group. Ten To Never can do epic and wide-screen, but they can also do intimate and delicate, and, refreshingly, they have the confidence to preserve these contrasts in their recordings.

As you might expect from that description, their music covers a fair amount of stylistic ground. For me, they are at their best, and certainly at their most contemporary, when they recall the post-rock textures of bands like Sigur Ros. The second and third tracks reveal a slightly more dated and less interesting blend of influences, including Chili Peppers-style non-funky funk-rock and the more turgid aspects of grunge, but on the whole, I'd say Kat has backed a winner in Ten To Never. Sam Inglis

ThisThatTheOther are one of those 'loose collective of like-minded musicians sharing a vibe' bands so prevalent in jazz-funk, and so mercifully rare in heavy metal or indie. Their CD perfectly encapsulates both the strengths and failings of this approach to music-making. On the one hand, the playing is mostly above reproach, especially Rob Merrill's drumming, and the musicians really do seem to share the same musical outlook.

On the other, the arrangement and mixing seem intended more to gratify individual egos than to present the band as a coherent whole, and the 'all must have prizes' philosophy eventually leads ThisThatTheOther to disaster on the third track. I can only assume that the other band members were either too polite or too scared of Derek 'Bigga D' Davey to point out that he really, really can't sing. Producer Rick Nowell has tried to limit the damage with strategic use of a vocoder, but on a soul ballad like 'Let Me Feel Your Love', there is unfortunately nowhere to hide. Sam Inglis

Phenomenation is an instrumental classical-cum-rock album written and produced by guitarist Richard Zeier. Conceived, says Richard, thanks to "proper alignment of the planets", this 13-track work represents his magnum opus. Grandiose wording, perhaps, especially considering that this is his first commercial release, but while such confidence and self-aggrandisement would probably be met with utter contempt coming from any other artist (even the title, Phenomenation, makes you wonder whether the man thinks he's above proper use of the English language), in this case it fits the music rather well.

Zeier studied film scoring at UCLA, and it shows in his music. In fact, most of the material on here sounds like a pretty convincing pitch for an über-budget Hollywod film soundtrack of the 'epic' variety. OK, so he strays into Top Gun territory occasionally, but when you consider that the album's format could so easily descend into being little more than a vehicle for tasteless guitar noodling, he shows a good deal of self-restraint. The scoring is also very impressive, and by far the album's strongest point.

My only doubt about Phenomenation is, with no offence intended to Richard Zeier, that I don't know who would want to buy it. I just can't see people listening to this kind of music without some kind of battle raging away on the telly. Personally, I think his talents would be much better expended on film scoring than commercial music releases. Failing that, he could probably make a respected name for himself in classical composition, if he can summon up the willpower to keep his guitar playing separate. Chris Korff

The best CD reviewed each month will win a Line 6 Toneport UX1 recording interface, plus the complete set of expansion model packs and the Gearbox Plug-in feature, giving the winners a comprehensive range of amp and effects combinations to use with their computer recording system. 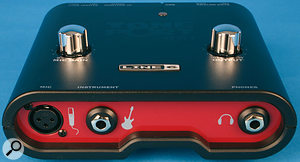