Some microphones ooze quality to the extent that price almost becomes unimportant. Is AEA's new active version of the venerable RCA 44 design one of them?

There is no doubt that ribbon mics are finally making a comeback in both the professional and project studio markets. More robust ribbon materials, stronger magnet structures, better noise performance in high‑gain preamplifiers, and lower‑cost far‑eastern production have all contributed to this resurgence — and I for one am very pleased to see it, because ribbon mics generally have an inherent smoothness and natural quality, particularly at the high end, which no other microphone topology can match. 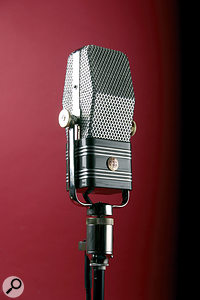 Amongst the longer established high‑end ribbon mic manufacturers, Wes Dooley — the man behind the US's Audio Engineering Associates (AEA) — is one of the best known and most vocal advocates of ribbons. Indeed, a large part of his professional life has involved refurbishing and maintaining vintage ribbon designs, and the progression to developing an impressive line up of his own designs was inevitable. I've been very impressed with AEA's mics, to the point that I own (treasure might be a better word) a couple of their R92 ribbons myself.

The latest addition to the AEA fold is the A440, which is an interesting revision of the huge vintage RCA 44 (and its current AEA variants), with a pleasing name‑play on a familiar musical term. It looks identical, in fact, but Wes and his team have built a high performance head‑amp into the mic case to provide a much stronger output signal.

The original, instantly recognisable RCA 44 ribbon mic was introduced in 1936, and has been revered ever since, along with its junior stablemates like the 77 and KU3, many of which are still in daily use in film‑scoring and classical music studios around the world. Towards the end of the last century, it was becoming hard to get parts to maintain these classic mics, and that provided the impetus for AEA to re‑start production to the original specs, launching these new incarnations as the R44C and R44CX models. These recreations use the same 1.8‑micron aluminium ribbon design as manufactured for RCA, and many of the parts are completely interchangeable with original RCA 44B and 44BX models. However, the output sensitivity of the standard model is a lowly 2.25mV/Pa (just like the original) and that places serious demands on the preamp, particularly when the mic is being used for distant placement. Even the high-output CX model only manages a feeble 5mV/Pa. No self‑respecting capacitor mic would dare be seen with less than 12mV/Pa on the spec sheet, and most are around the 20‑25mV/Pa mark.

Thankfully, the advent of phantom powering and miniaturised solid‑state electronics have allowed this common weakness of ribbon mics to be addressed, and there are already several 'active ribbon' mics on the market taking the same approach for the same reason. The AEA A440 joins the fray by harnessing the proven J‑FET amplifier technology used in the company's TRP preamps to the large-ribbon R44C mechanics. The result is a very healthy sensitivity of around 30mV/pa — higher than most capacitor mics — yet retaining a self‑noise floor of just 6dBA, which equals the best of any current electrostatic design. The internal head‑amp requires standard phantom power, of course, and also ensures the ribbon is fully protected from phantom power — something that's a perennial concern for so many ribbon mic users.

Like its antecedents, the A440 maintains the instantly recognisable gigantic angular shape, with the huge, punched grille and slightly utilitarian-looking grey and silver finish. It is just as heavy as the R44C, at around 3.45kg, and just as big, at 31.25 x 11.7 x 84 cm (HxWxD). You'll have to invest in a seriously heavy‑duty mic stand to support this monster safely. Like the other AEA variants of this design, the mic resides (permanently) in an adjustable cradle frame with an integral stand adaptor‑cum‑shockmount, and the output is via a captive cable terminated in an XLR. However, as the A440 is custom‑built to order, any required cable length can be accommodated, and the case can even be laser‑engraved with a corporate logo.

Again, like the similar R44 models, the A440 is shipped in a bespoke and tough cordura case, lined with protective foam, and complete with a zipped cotton bag to protect the mic once the original plastic packing bags have been removed. It's important to keep all ribbon mics covered when not in use, and packed away vertically to prevent ribbon sag.

I reviewed the AEA R44C in the pages of SOS back in June 2002, and comparing my notes from back then with my listening tests on the new A440, the family character remains clearly in place. As expected, the A440 exhibited the perfect figure‑of‑eight polar response, with identical tonality front and back. The side nulls are wonderfully deep and well defined, but across the wide frontal and rearward working angles the sound quality remains remarkably consistent. The mic has been specified with a maximum SPL of 136dB (for one percent THD), and although that is 30dB lower than the passive version it is still more than enough for most applications (presumably, the internal preamp's dynamic range is the limiting factor here).

The frequency response is very similar to the original model. In fact, it's smoother, if anything, but with the same characteristic 2dB/octave droop, falling about 10dB between 300Hz and 7kHz, above which the roll‑off steepens. The bottom extends powerfully to 20Hz and below, producing a rich, warm and smooth-sounding mic, although one that still retains precise HF detail and clarity. The proximity effect is strong, of course, becoming quite evident for sources closer than a couple of feet, but that can be used creatively when appropriate.

Placing the A440 slightly to the side and a few feet from the bell of a trumpet captured a very vivid and lifelike performance, and I needed almost 30dB less gain than for my own AEA R92 placed alongside (feeding my AEA TRP preamp). On acoustic instruments like acoustic guitars the A440 revealed a fast, detailed character, with a warm upper-bass response, and a rich, smooth treble, which is musically complementary and easy on the ear. Twelve‑string guitar was also captured without any harshness or signs of intermodulation distortion, while stringed instruments — and orchestral strings in particular — sounded fantastically smooth and natural.

But the different design philosophies of the A440 and R92 become very obvious when the mics are compared side by side. The former is clearly designed for relatively distant placements, and sounds optimally balanced when at least five or six feet away. The R92 gives its best when within about two feet. Given a scoring stage or orchestral venue, the A440 can be used to advantage, but for close working in a project studio, the R92 might prove the more practical choice.

The deep side‑nulls of all ribbon mics can be used to enormous advantage when it comes to rejecting unwanted spill, but the rear lobe pickup must always be remembered, especially when the rear lobe has the same frequency response as the front lobe, as it does in the A440 (unlike the R92). Of course, this identical-sounding rear pickup can also be very useful, for example for capturing a second performer on the same channel (balancing levels by moving the mic between the two players). If the rear lobe isn't required, something like an SE Reflexion Filter placed behind the mic can be very effective in reducing the amount of reverberation or spill captured.

There can be no doubt that this is an impressive, imposing and fabulous sounding microphone, and the addition of the built‑in head‑amp makes it far easier to match it with a suitable preamp. But it is really only suitable for use in a large, good‑sounding room, where distant placement is appropriate. And at the current price, this is one seriously expensive mic that will be the province of only the few remaining high‑end professionals, or perhaps 'resting' city traders, indulging their musical hobbies while waiting for a stock market revival!

As with the other RCA44 variants, though, it is enough for us cash‑starved mortals to know that such fabulous mics are still available, and easier to use now than ever before — and that they still sound utterly wonderful. When I reviewed this microphone's forebear, I suggested that it was like a vintage Bentley: expensive and revered, but not easy to justify to the accountants. The same is true of this one, only it's now been fitted with a supercharger! Unfortunately, once you've heard this mic, you'll always aspire to own it.

There are now several active ribbon microphones on the market (see our ribbon-mic group test in SOS November and December '07), but rather fewer that give the A440 serious competition. The obvious contenders are SE Electronics' Rupert Neve-designed RNR1, reviewed last month, and the Royer R122, but although these are both great mics in their own right, the A440 is significantly quieter, putting it in a class of its own when it comes to distant-miking applications.

A new generation of recording engineers has discovered the sonic beauty of the ribbon mic, and the A440 represents the pinnacle of that particular mountain. All the sonic mastery of the original RCA44, but with a far more practical output signal level, whilst retaining a class‑leading low noise floor.