This new monster mic incorporates two separate ribbon diaphragms, allowing you to use either Blumlein or M&S stereo recording configurations.

While touring the recent AES convention in New York, I was struck with how many companies were showing or launching ribbon microphones. Although good ribbon microphones deliver a beautiful and unique sound in the right circumstances, they were largely usurped by capacitor mics as the engineer's weapon of choice a long time ago. Advances in magnet technology and low-noise preamplification have made ribbons far more usable than they used to be, allowing the benefits of an inherently low noise floor, high SPL handling, and excellent transient response to be enjoyed to the full.

One of the more prominent names associated with ribbon microphones is Audio Engineering Associates (AEA), an American company owned and run by Wes Dooley, a highly regarded recording engineer with an exhaustive knowledge of ribbon microphones old and new. Sound On Sound has carried reviews of AEA ribbon mics before (the RCA44 and the R84), but this review is a little different, because the new R88 is the only stereo ribbon mic I have ever come across.

The AEA R88 is, in rather simplistic terms, two R84 figure-of-eight mics mounted one above the other in a common housing. As a result, this is a seriously large (and heavy) microphone. It measures 2.6 inches in diameter — the same as the R84 — but a whopping 15.9 inches long (including the fixed mounting frame), and it weighs a stand-bending 5lbs, including the weight of the captive cable. However, although this is one of the largest microphones around, it is still considerably shorter than a pair of R84s mounted one above the other!

The mic is supplied in a black nylon case, lined with a velvet material, and is protected from dust by a separate nylon bag. The latter helps to prevent stray ferrous particles — 'tramp iron' to use the American vernacular — from being attracted by the magnets and eventually fouling the ribbon gap when the mic is not in use. The User Manual reminds owners to store the mic vertically in its case to prevent the ribbon sagging under its own weight.

The output cable is fixed to the bottom of the mic body, and extends for four metres before breaking out to a pair of Switchcraft male three-pin XLRs (pin two is hot). The cable is secured to the supporting frame as well, to provide some additional vibration isolation. The XLR plugs are undifferentiated, but the wires themselves are clearly numbered to identify the two capsule outputs. The body's metal end caps are supported top and bottom by a cunning metal frame, and are isolated with rubber pads. The frame features a 90-degree offset across the middle to ensure that the vertical portions lie in the nulls of each capsule. Covering the two ribbons across the central portion of the microphone is a tight shiny black fabric supported by an internal wire frame.

The base of the support bracket is fitted with a 5/8-inch threaded socket for direct mounting on a stand or suspension cable, but the mic is also supplied with a very robust knuckle adaptor. This can be screwed into the support to allow the mic to be tilted at any desired angle. Serrated teeth between the two halves of the adaptor ensure that the mic won't droop.

Internally, the dual-aluminium-diaphragm design is unique to the R88, but is similar to that of the R84 — being tweaked slightly to improve the off-axis frequency response. Each ribbon measures 2.35 x 0.185 inches (60 x 4.7mm), and is 1.8 microns thick. The two ribbons are mounted at 90 degrees to each other in the classic Blumlein manner, and cannot be adjusted at all. Markings on the body identify the two capsules and helpfully show the relative polarities of the front and rear lobes. In normal left-right stereo use, the microphone's AEA logo would be pointed at the centre of the musical ensemble or instrument, with output one connected to the left channel and output two to the right. 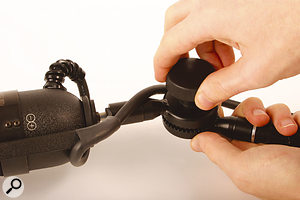 An included mic-stand adaptor allows the microphone to be angled as required.Photo: Mark EwingFor the more adventurous, the mic could be rotated 45 degrees to the left and used as an M&S pair, with output two providing the Middle channel and output one the Sides channel. This may seem counterintuitive to those unfamiliar with M&S practice: most would probably assume output one to be the Middle channel and output two the Sides channel. However, for correct M&S decoding, the left-hand lobe of the side mic must be in the same polarity as the front of the Middle mic. The only way to achieve that with fixed capsules is to use the left channel as the Sides mic, and the right channel as the Middle mic.

The frequency-response chart for the R88 shows a significant tilt from left to right. Relative to 200Hz, the mic is about 2dB down at 1kHz, 5dB down by 8kHz, and 10dB down by 20kHz — a rather steeper response tilt than that of the R84, although it doesn't sound 'dull' in use. The response below 200Hz wasn't shown, but judging by ear I'd say the level falls smoothly and gently, extending a very long way indeed — the specs claim a usable output at 20Hz and I can well believe it! The diaphragm resonance is 16Hz, and I did find the mic quite prone to low-frequency rumbles, despite the built-in shockmounting.

The figure-of-eight polar response of each capsule is very consistent, with horizontal coverage over the usual ±45 degree range (front and back) and side nulls which are smooth and deep. The relatively long ribbon means that the vertical acceptance angle is slightly narrower than usual — especially at high frequencies — spanning maybe ±30 degrees. However, the high-frequency response falls smoothly, with no nasty off-axis colorations to worry about.

The user manual quotes the maximum SPL as over 165dB above 1kHz (for one percent third-harmonic distortion), although care must be taken to protect the mic from direct wind blasts. This is not a mic to place close in front of brass instruments or bass drums! The output sensitivity is given as a respectable -50dBu/Pa, which shouldn't tax decent preamplifiers too much. Having said that, the crossed figure-of-eight design of this stereo mic means that relatively distant placements would have to be used in many situations, and that could easily call for mic gain settings in excess of 60dB. The R88's output impedance is surprisingly high at 270Ω, and it requires a minimum load impedance of 1.5kΩ, which isn't likely to prove a problem.

Obviously, the R88 is designed for use as a stereo mic, and its performance has been optimised accordingly. This is most notable in its proximity effect, which is very strong for close sources in order to maintain a healthy bass response for the typically distant sources encountered by a Blumlein stereo mic.

Given the size and weight of this mic, a robust stand is mandatory, and I preferred to use a stand without a boom arm for most applications, employing the supplied angle bracket when I needed to tilt the microphone. I auditioned the R88 with various instruments and ensembles: an amateur string orchestra, a small church choir, a pipe organ, a grand piano, and a small drum set. Sadly, the opportunity did not present itself to try it with a brass section, where I would have expected it to fare extremely well.

The piano recording was particularly pleasing with the mic placed classically — about six feet away in the curve of the piano, and slightly below a line extending from the axis of the fully open lid. The sound was very natural, with a coherent tone and impressive transient dynamics, and the bass extension was not far short of my usual omni capacitor mics. A brief experiment with the mic inside the piano (about 12 inches away from the hammers and looking down onto the strings from about eight inches) provided a typically 'pop' sound, but without the fierceness than can mar this technique when using some capacitor mics.

The AEA logo on the mic made it easy to aim accurately, and stereo imaging was pin sharp, as demonstrated clearly with the choir, orchestra, and organ tests, the last allowing the location of individual pipes to be identified with ease. Amateur string orchestras would normally fill me with dread, but the R88 managed to capture a well-rounded and natural string tone with plenty of body and detail, minimising the 'screechy' artefacts that many condenser mics would have emphasised. This is a common characteristic of most ribbons, and is partly to do with the inherently low resonant frequency — most condenser capsules tend to resonate at around 8-10kHz, which is often a factor in the characteristic capacitor-mic 'edge'.

Ribbons are quite popular for drum overheads in the studio, and the R88 performed superbly when placed behind the drummer (looking down from about two feet above his head), delivering crisp, clean cymbals without splashiness. The drum dynamics were captured very well too, and the rear lobes of the mic seemed to do a very nice job of picking up the room acoustic in perfect proportion, negating the need for separate 'room mics' on this occasion. I also tried mounting the mic directly in front of the kit at head height, and obtained very natural 'jazz style' results.

The overall character of the R88 is decidedly 'warm' rather than 'dull', yet it still manages to capture dynamics and transients with a very natural clarity. The stereo imaging is faultless, and when partnered with good mic preamps, the noise floor is extremely low. I used GML and Focusrite ISA428 mic preamps, both offering plenty of gain. I did have to crank the gain to nearly 70dB when recording the small string orchestra, but for all the other sources I rarely exceeded 60dB, so most preamps would probably be able to cope with the R88 in most situations. The Focusrite also allowed some experimentation with input impedances, but I found the best results were obtained with the highest setting.

The classic Blumlein stereo technique can deliver superb results in the right settings, although placing the mic in the ideal position can sometimes prove difficult for a variety of tedious practical reasons. In such cases, being able to operate the mic as an MS array — allowing the stereo width to be manipulated — can be very useful. To prove the point, I rigged the mic up to a Yamaha DM1000 digital console and switched a pair of input channels to handle the M&S outputs directly. As you would expect, there was a small difference in tonality from the conventional left-right configuration due to the frequency-response variation with incident angle — in the left-right mode, central sources are picked up by the edges of the diaphragms' polar patterns, whereas in the M&S mode, they are picked up directly on-axis to the Middle mic. This small tonal variation might influence me to mic up solo instruments within a nice acoustic space using the M&S configuration rather than the left-right mode — but that would be being very picky!

This is a very impressive microphone and one which is without equal as far as I know. It will appeal to the purist classical-music engineer without doubt, but it also has a much wider role in the studio. Long live the ribbon revolution!

A unique stereo ribbon mic in the classic Blumlein mould, combining the characteristic attributes of ribbon technology — a warm, pleasing sound, crisp transients, and natural dynamics — with superbly well-focused stereo imaging. This mic makes an excellent package for anyone who appreciates the virtues of the ribbon and the convenience of a fixed-stereo mic.