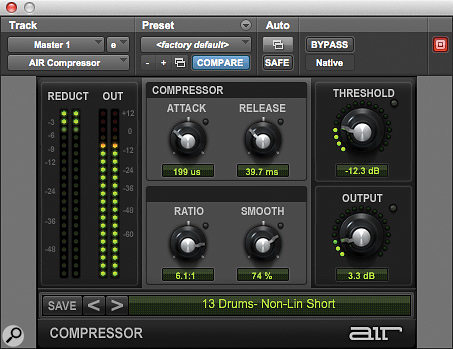 Once available only to Pro Tools users, AIR’s comprehensive plug-in bundle is now open to all — and has been augmented by some intriguing additions.

The software development team now known as AIR Music Technology have had an eventful career. Founded by Peter Gorges under the name Wizoo, the company started life as publishers, writing third-party manuals for instruments like the Kawai K5000. Wizoo then moved into sound design, initially with the curious VST Drum Sessions and then, in 2004, with the excellent Hypersonic virtual instrument.

The following year, Wizoo were acquired by Digidesign, and under the AIR name, began producing a series of virtual instruments specifically for the Pro Tools platform. These included the free Xpand! workstation synth module that was bundled free with Pro Tools and closely based on Hypersonic, along with the Structure sampler, Strike drum instrument and more. Also bundled free with Pro Tools was the AIR Creative FX Collection, a set of simple-to-use effects and processors that eventually ran to 20 different plug-ins. 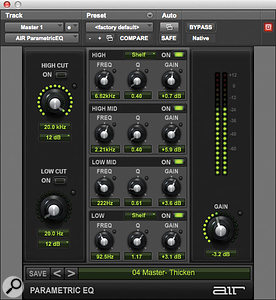 However, further upheaval was to follow, and the AIR team left Avid for a new home under the wing of InMusic, the group that also includes the likes of Akai, Alesis and M-Audio. As a result, AIR products are no longer tied to Pro Tools, and the current versions of Strike, Structure, Velvet and so on are all available in Audio Units and VST formats as well as in AAX Native format. So too is the Creative FX Collection. The original 20 plug-ins are now being bundled with various hardware products rather than with Pro Tools, but a new and expanded version is also available for sale under the name Creative FX Collection Plus.

The highlights of the original Creative FX Collection are summarised in the box; for the purposes of this review, I’ll focus on the new plug-ins, of which there are eight. In no particular order, AIR Compressor and AIR Parametric EQ are exactly what their names suggest: a simple, no-frills compressor and four-band parametric equaliser. They work fine, but their only distinguishing feature is that they are wrongly categorised as Modulation effects in Pro Tools. Given that every DAW program on the planet comes with more powerful equivalents for free, I can only assume that they were included to bulk out the collection, rather than because anyone actually needs them. 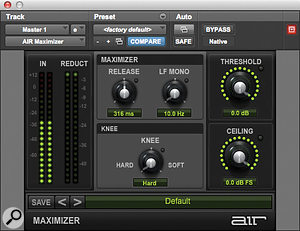 While the compressor and EQ may be pointless, though, they are at least harmless. The same cannot be said for the AIR Maximizer mastering limiter. Call me old-fashioned, but if I set the Threshold and Ceiling controls on a limiter to 0dB, and the input signal doesn’t approach 0dB, I expect nothing to happen. Here, significant amounts of gain are applied even with settings that should do nothing at all, making it impossible to perform meaningful comparisons between processed and unprocessed sounds — and whose idea was it to employ a tiny gain-reduction meter with a range that spans 60dB?! Over the course of my reviewing career I’ve encountered a few underwhelming plug-ins, but this is the first one I feel should actively be avoided. And since, once again, most DAWs come with serviceable limiters built-in, it shouldn’t be too badly missed.

Happily, the rest of the collection is more worthwhile. AIR SaturationFilter is not a million miles removed from the ealier AIR VintageFilter and numerous other plug-ins, but provides a well-judged combination of features in a package that’s simplicity itself to use. In essence, you get a choice of 23 different filter responses and six different ‘flavours’ of distortion, with adjustable cutoff, drive and resonance. The last is arguably a bit weedy — I couldn’t get it to approach self-oscillation in any combination of settings — but as a handy quick tone-shaper for instant lo-fi-ifying, it has its uses. 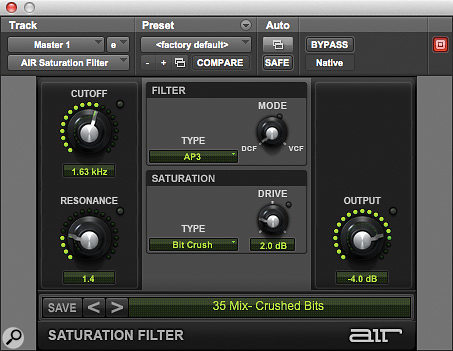 The AIR TubeDrive plug-in provides another effective way of warming up sterile-sounding sources. It’s not intended as a full-on distortion effect, and the range of the controls is nicely judged to run from barely audible to the edge of break-up. 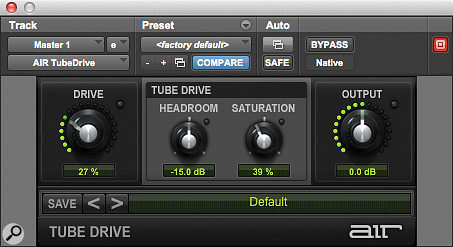 Anyone who’s heard an EDM track made in the last decade will be familiar with the effect of side-chain compression triggered from the kick drum to generate pumping on the mix bus. AIR Pumper provides a neat way of achieving the same end without incriminating the kick drum. In essence, it’s a sort of automated, tempo-sync’ed envelope control that you could use either on a submix or across the entire mix bus. The depth and shape of the envelope are controllable, as are the attack, release and hold times, and it can be triggered either automatically or using MIDI. It seems to me a sound implementation of a good idea, inasmuch as pumping the mix bus is ever a good idea: you no longer need to worry about setting up complex side-chain routings, and you’re free to choose different kick drum sounds without worrying about the effect on your bus compressor. 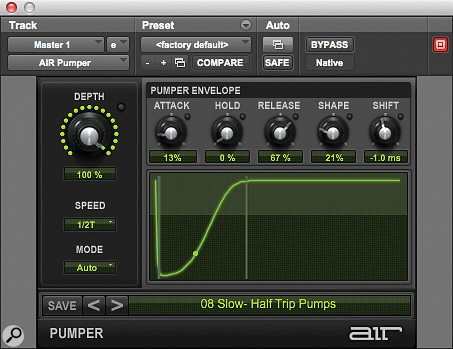 AIR DiffuserDelay is a curious halfway house between a delay and a reverb. Again, the control set is very simple: large dials on the left and right select the delay time and wet/dry mix values, and you can also control the amount of feedback, diffusion and high-frequency roll-off. It’s capable of some pleasant effects that are softer than straight delays but less dense than reverbs, but is to my mind a bit too limited. The delay time appears to be always sync’ed to host tempo, so you can’t set it in milliseconds, and there’s no low-cut option, nor any description of what the high-cut option is actually doing. 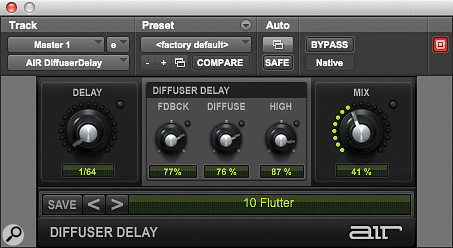 By far the most unusual and the most interesting of the new plug-ins, however, is AIR Spectral. With no fewer than 13 controls, it’s also somewhat more complex than any of the others. The description on the AIR web site makes mention of resynthesis, but this doesn’t seem to be a full-on Alchemy-style additive synth that can recreate sounds from raw sine waves. Rather, it appears that the input signal is filtered in various ways before being reprocessed and spat out again. Rotary controls let you exclude any elements that fall outside a particular frequency range or, more interestingly, a particular dynamic range, and a third variety of filtering takes MIDI notes as its source. To the filtered audio you can then apply three processes labelled Random Dissolve, Partial Envelope and Stereo Phase Delink. 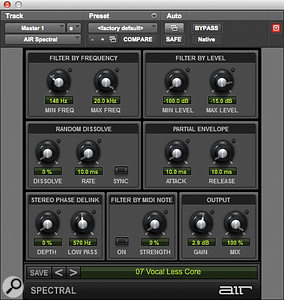 The manual offers no hint as to what sort of sources AIR Spectral might suit, so a certain amount of trial and error is required. It quickly becomes apparent that this is more a special-effect plug-in than something you’d routinely use across many tracks in a mix, though that’s not to say that it’s always radical in its effect. In particular, it provides some interesting ways to change the character of a recorded vocal, in which role it usually does a good job of retaining intelligibility. It can also generate quite subtle stereo widening effects. Used more aggressively, the result is — in a good way — a bit like what you’d get if you used a low bit-rate MP3 encoder or noise-reduction processor as an effect, with chirping and warbling very much to the fore. I don’t anticipate finding a use for it on every track, but it’s refreshing to come across a plug-in that does something distinctive and unfamiliar.

All in all, I can’t see the AIR Creative FX Collection Plus changing anyone’s life. As with any large plug-in collection, you’re bound to find that some of what’s here simply duplicates plug-ins you already own, or doesn’t interest you; and the AIR Maximizer strikes me as positively hazardous. But, equally, in a bundle that contains 28 separate plug-ins, there will undoubtedly be something on offer that proves its worth, whether because it does something new or just happens to chime with your way of working. It’s not a ‘must-have’ by any means, but in the long run, will probably repay the modest outlay.

Much of the ground that the Creative FX Collection Plus covers is also covered by the plug-ins bundled with the major DAW packages, though in some cases the AIR implementation is simpler and easier to use.

AIR’s original Creative FX Collection was launched when the developers were part of the Avid group, and has been bundled with Pro Tools since v8. Many of the 20 included plug-ins have proved themselves to be solid workhorses, though the makers’ claim that this collection is “considered the reference FX suite by some of the world’s most respected audio professionals” is optmistic. (Which “respected audio professionals”, exactly?)

The collection includes no fewer than three reverbs. AIR Reverb is a basic algorithmic design which is notable mainly for being less horrible than the standard Pro Tools D-Verb plug-in, but AIR SpringReverb and AIR Non-linearReverb both offer distinctive effects that aren’t always achievable from conventional reverbs. AIR Multi-Delay and DynamicDelay take the humble digital delay in different directions, the former allowing very complex feedback paths to be set up while the latter makes it easy to create ducking delays.

The five modulation effects include a phaser, flanger and not one, nor two, but three variations on the humble chorus. Of these, AIR Ensemble is my favourite, making a decent fist of the classic Boss-style ensemble effect.

AIR Distortion, Fuzz-Wah and Lo-Fi are all useful and worthwhile variations on a theme of dirt and grit, while AIR StereoWidth and Enhancer provide simple ways to inflate the perceived size and frequency response of instruments in a mix. AIR KillEQ is a standard DJ-style three-band EQ, with steep filters that allow you to slice out the bass, mids or high frequencies from a track for remixing purposes. AIR FilterGate is another EDM-oriented tool: a ‘chopper’ that slices input audio up into rhythmic chunks before subjecting them to filtering and other abuse. AIR VintageFilter is, as the name suggests, a synth-style resonant filter with modulation, while AIR Talkbox recreates the classic talkbox effect, useful as an alternative to the vocoder or for those Peter Frampton tribute projects.

Finally, AIR FrequencyShifter is a nice implementation of a rarely seen effect. Not to be confused with pitch-shifting, frequency shifting slides all the hramonics in the source signal up or down the spectrum by the same number of cycles per second. In most circumstances, this means they no longer retain a simple mathematical frequency ratio, so the sound becomes increasingly enharmonic.

The AIR Creative FX Collection Plus provides a decent selection of bread-and-butter effects and processors, topped off with one or two surprises.