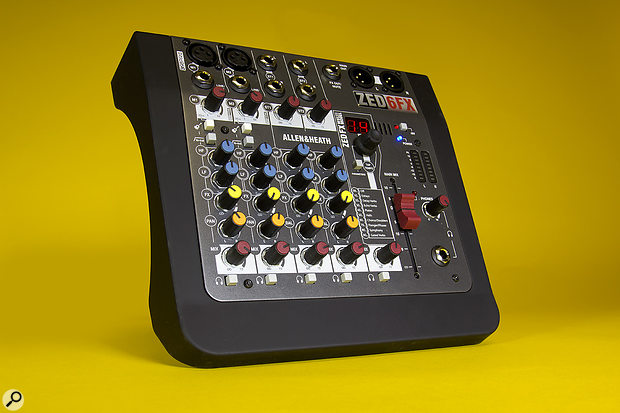 This handy little mixer exhibits all the qualities you’d expect from Allen & Heath, in a highly affordable and portable format.

While Allen & Heath’s engineers may not sleep much, they certainly manage to keep knocking out new ZED-series mixers! The diminutive ZED-6FX is the subject of this review, and it is well suited to smaller live performance setups or duos who need onboard effects and a combination of mic and line input channels. There are two mic channels on this model, both utilising the company’s GSPre boutique preamp design taken from their GS-R24 recording console, promising low noise and high headroom along with a degree of analogue warmth. The FX part of title refers to the inbuilt suite of reverbs, delays and multi-effect treatments.

Housed in a soft-touch plastic case with an inset metal control panel, the mixer is mains-powered (via a clover-leaf connector and switch on the rear panel), so there are no external PSUs to break or forget. The ZED-6FX has two mic/line/instrument channels, each with a separate XLR for the mic input and TRS jack socket for line/instrument sources, plus two further stereo line-only channels accessed via a pair of TRS jacks at the top of each strip. These can accept either balanced or unbalanced inputs.

All channels have the same basic control set, comprising two-band EQ, effects send, pan and ‘mix’ (a rotary level fader). The mic/line channels also have a low-cut filter option and a switch for selecting instrument input mode, which bump up the input impedance to suit guitar pickups. Each channel, including the effects return, has a headphone solo button, and the main mix level is controlled by a single 60mm stereo fader. Phantom power can be switched on for the two XLR inputs using a button in the master section. The ‘phones output has its own level control, and its output is on a standard stereo quarter-inch jack. The main mix outputs are provided on balanced XLRs. A TRS footswitch jack is provided for muting the effects section between songs (by shorting the tip to the sleeve), and may also be used as an output to send the effects signal out of the mixer. Metering is via a pair of small eight-segment LED bargraphs.

The effects section, which has its own level control, has the effects types arranged as nine banks with up to 10 effects per bank (bank 0 is off). The most useful of these presets in a live context are likely to be the delays, reverbs and reverb/delay combinations, though there’s also a selection of modulation effects and five gated reverb presets. There’s a push-select switch set into the rotary encoder and there’s also a Tap Tempo button next to the encoder. When pushed and held, this allows for up to 10 variations to be dialled in per preset. Edits are saved to the preset when the power is turned off but all the editable effects parameters can be reset to their factory defaults, by holding down the FX Select, Parameter and Tap Tempo buttons at the same time while switching on the power. A numeric LED shows the current preset number, with a flashing decimal point denoting that the tap tempo facility is applicable.

Overall the ZED-6FX is a very simple yet sophisticated-sounding little mixer, with a good range of usable effects, clean mic preamps and plenty of gain when needed. OK, the EQs only have two bands, and there’s no provision for setting up a monitor mix, but not everyone needs those things. The effects may include the obligatory outlandish huge halls and a few other extreme effects treatments, but there are plenty of really great-sounding bread and butter effects in there too, and having a dedicated tap-tempo button is a big bonus when working live. The ZEDi8 (mentioned in the box) offers similar quality but without effects. It does, however, include a two-channel USB interface, making it useful as a recording front end or as a means of feeding USB audio sources into a mix.

Small mixers, with or without effects and USB connectivity, are available from a number of companies; the more obvious names at the affordable end of the price spectrum are Mackie, Alesis, Phonic, Alto, Behringer and Samson. 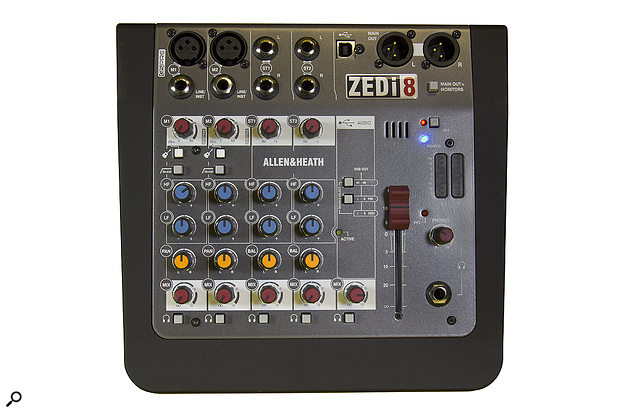 An alternative to the ZED-6FX is the ZEDi-8. Costing the same as the 6FX, the ZEDi-8 is essentially the same mixer but without the on-board effects [a ZEDi craves not these things — Ed.] and with a two-channel USB interface built in. The USB input has its own level control so in total there are the six analogue inputs, as per the ZED-6FX, plus the stereo USB feed.

The USB output from the mixer can be selected via a pair of buttons to follow the two mic inputs only, or the main stereo mix either pre or post the master fader. In other respects the feature set and hardware format is identical, making the ZEDi-8 a useful combination of mixer and two-channel audio interface. Mac users don’t need any driver software, while a Windows driver is available for download on the Allen & Heath web site. I tested the USB side of the mixer with my MacBook Pro and it worked without any fuss, and with no evidence of background digital noise.

Both the ZED-6FX and the closely related ZEDi8 do exactly what they set out to do with no problems. The effects in the ZED-6FX version offer more useful reverb/delay settings than many of its competitors.