I love my Electro‑Harmonix Small Stone phasers so I was delighted when AJH Synth announced that their Mega-Phase 12 Eurorack module was to be based upon them. But before I ever got my hands upon one, the Mega-Phase was succeeded by the Next Phase, which improves upon its predecessor by offering dual level controls that allow you to trim the signal levels at their associated inputs, a new parameter that acts as a useful tone control for the phasing effect, higher‑quality rotary switches, and improved circuitry with lower‑noise op-amps and VCAs. 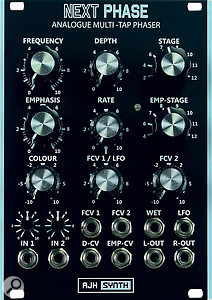 Size: 18HP. Current: +12V 90mA, -12V 85mA.As you would expect, the Next Phase offers a wider range of control over the phasing effect than is provided by stompboxes. In addition to its physical controls, you can apply two CVs to determine the central frequency around which the phaser sweeps and the nature of the sweep itself, plus CVs for the depth of the sweep (which is, by default, generated from an internal LFO) and the amount of emphasis. These mean that you can apply complex modulation signals that take the effect way beyond the triangle or sine‑wave sweeps of traditional phasers. However, there's no CV input for controlling the internal LFO rate; if you want to obtain the effects that can be obtained by doing this you have to direct an external LFO to one of the frequency control inputs and modulate this.

Not only can you select different stage lengths for the main signal path and the emphasis loop, you can tap these separately, with the conventional output signal appearing at the L-Out socket and the signal within the emphasis loop appearing at the R‑Out socket. This means that you can split a single channel of audio into two differently affected signals and send these to disparate destinations within your modular synth or elsewhere. So although the Next Phase is not a stereo phaser in the conventional sense, you can obtain some wonderfully spacious effects by panning these two signals hard left and hard right in your mix. You can also obtain something akin to the traditional stereo effect using two Next Phases, with the modulating signal from the first applied with inverse polarity as the frequency CV of the second. (Genuine stereo phasers usually have the modulating signals of the two units 90 degrees out of phase with one another, rather than 180.)

I tested a single Next Phase within a large Eurorack system and also used it as an outboard effect for two of my workstations and polysynths. I was impressed by the extensive range of high‑quality effects that I was able to obtain and (inevitably, I suppose) particularly liked it when used with pads and string ensembles. It's capable of generating anything from subtle movement and stereo spread to the classic Oxygene sweep, and then goes further to create heavier and more dramatic effects. This was also when I discovered the fun to be had by tapping the 'wet' signal from its dedicated output, doing something creative to that using other effects and filters, and then reinserting the modified signal into input 2 to create a second feedback loop.

Of course, having the equivalent of three Small Stone phasers in series requires a lot of analogue circuitry so it's not surprising that the Next Phase can generate audible broadband noise but, since this is part of the character of analogue phasers, I'm not too concerned about it. Having said that, I would almost certainly place a gate or a suitably patched VCA after the Next Phase if I were to use one live or in the studio. In addition, phasers can be sensitive to noise on the DC rails powering them. I tested the Next Phase with the Doepfer A100 rack case in which it was supplied and found that, with eight or more stages selected, it could sometimes (depending upon what else was connected and how) generate artifacts when the case was full and stressing the PSU. It never did so when the case was partially populated, and no such issues were encountered when I tested it in a smaller Arturia RackBrute. Happily, AJH supply a power‑line noise filter to ensure that, should you ever encounter a problem, sensitive modules — whether from their own stable or from elsewhere — can receive clean power even when the PSUs in the cases seem less able to provide it.

Phasers remain my favourite modulation effects, and I think that the Next Phase is the most flexible that I have ever used. While I have huge soft spots for the Mode Machines KRP1 Krautrock phaser, the Roland SPH‑323, the MXR Phase 100 and the Small Stone, the Next Phase can produce effects that none of these can, which is very much to its credit.