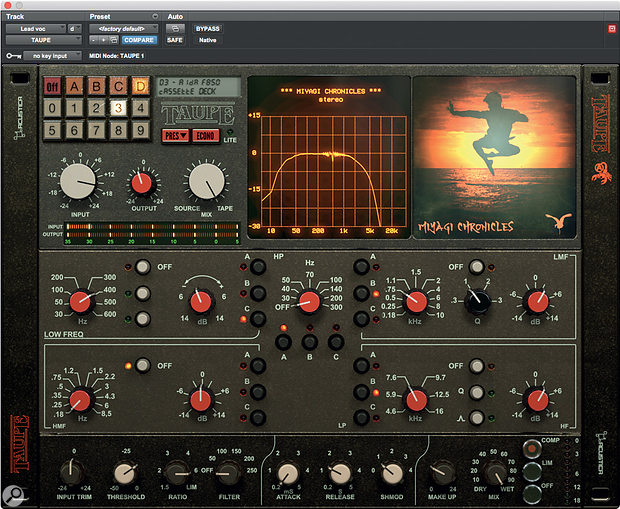 Acustica Audio have applied their unique sampling technology to the world of magnetic recording media — with impressive results.

Acustica Audio's Acqua series of plug-ins recreate classic items of analogue studio hardware, but here's no modelling or emulation involved. Instead, Acustica use a proprietary form of convolution to, in effect, 'sample' the response of the original units. Unlike conventional static convolution, their Diamond Volterra Kernels can capture both linear and non-linear behaviour, allowing them to mimic not only reverbs and EQs, but also compressors, preamps, and — in the latest addition to the range — tape machines.

Taupe Of The Pops

There are now so many plug-ins in the Acqua collection that Acustica seem to be running out of colours to name them after. According to Wikipedia, "even people who use colour professionally often disagree about what 'taupe' means," which perhaps makes this a doubly apt name: audio engineers generally agree that tape has 'a sound', but will argue endlessly as to what the character of that sound is, which aspects of the tape‑recording process are responsible for it, and which machines sounded best.

Taupe allows users to make up their own minds on the first and last of these points, but takes a firm position on the second. Unlike most modelling-based 'tape' plug-ins, it does not reprodce wow and flutter, and its 'samples' have been scrupulously de-noised, so it introduces no discernible hiss. Nor, thankfully, does it recreate print-through, dropouts, timecode bleed, dodgy alignment, lengthy rewind times or any of the other undesirable features of tape recording. In their place, Acustica have added genuinely worthwhile features in the shape of a four-band equaliser and a compressor, all likewise 'sampled' from classic studio hardware.

Taupe is thus a suite of plug-ins rather than a single processor. As well as a full-fat channel‑strip plug-in that includes all three modules, the tape, EQ and compressor are split out to separare plug-ins, and there are also zero-latency versions for tracking. The full channel-strip version of Taupe places its three modules in a fixed order whereby tape precedes EQ, which in turn feeds the compressor. It's perhaps a shame that this can't be changed around, as is possible with other Acustica channel strips, but you could always employ the same processing in a different order using the individual plug-ins.

Like all the Acqua plug-ins, Taupe is installed and authorised through Acustica's Aquarius licence manager — a process which is, by now, relatively painless. It employs the latest 'Core13' iteration of Acustica's convolution technology, said to be the most CPU-efficient yet and to offer reduced loading times for sample sets.

As the lack of wow, flutter and noise attests, Acustica believe that the magic of tape recording is mainly a matter of the frequency response and non-linear behaviour of tape as a medium, and of the electronics in the record and replay circuits. Their approach to recreating this employs three processing 'cells', dedicated respectively to capturing the machine's behaviour with respect to the fundamental, the harmonics, and signal dynamics (ie. 'tape compression'). There's a lot going on in the background, clearly, but from the user's point of view, it's simply a matter of choosing one of the 40 sample sets and adjusting the input trim to recreate the effect of recording hotter or more quietly to tape.

There's only one possible 'gotcha', which relates to the Mix knob. On most of the sampled machines, this is is labelled Source at one end of its travel and Tape at the other, but it isn't a wet/dry balance control. The Tape signal is, as you'd expect, what you'd hear coming back from tape through the machine's entire record/replay signal path, whereas the Source signal recreates only the side-effects of the preamp circuitry, not the actual tape. The manual says that harmonic distortion is typically 18dB lower in the Source signal, but what it doesn't mention is that the phase relationship between Source and Tape can be complicated, so intermediate positions of the Mix knob can introduce very noticeable cancellation and filtering. I didn't find much practical use for these, and given the potential for confusion, I wonder if a simple switch might have been a better choice.

The 40 sample sets are stored in four banks of 10, and each is accompanied by a graph of its frequency response and a treated photograph which obviously means something to someone. The naming of the samples is also obscure to say the least, but a subsidiary grey LCD-style readout provides additional information that makes them identifiable. The list includes many classic studio multitrack and stereo recorders from the likes of Studer, MCI, Otari, Ampex and Revox, but also ventures off the beaten track with more unusual gems like the Soundcraft Saturn, high-end cassette recorders, an EMI TR50 valve machine, Nagra portable recorders and even a couple of digital tape machines. Several of the machines are represented three or four times with different tape speeds and so forth.

I'm not always a fan of Acustica's rather whimsical approach to preset naming, but in this case, I rather liked it. It forces you to choose a tape machine and settings based on the way they sound, rather than on your preconceptions about a particular model, and quite often I found myself preferring settings that I probably wouldn't have ever tried if I had known what they were!

The EQ module and plug-in follows an overall format that is familiar from other channel strips in the Acqua series, complete with mildly irritating operational quirks. There's a choice of three different sampled EQs for each band, labelled A, B and C, plus an Off button and associated light — the general rule with Acustica user interfaces seems to be that the more things are lit up, the more they're bypassed. As on other Acqua EQs, the frequency settings for the different sampled EQs vary, and when you switch between them, the knob jumps to the nearest physical position rather than the nearest frequency setting, which can confuse. Switching a band off also resets its user interface to the B setting regardless of which one you were last using.

Appropriately, all the EQ bands are sampled from large-format analogue consoles that were originally created to work with multitrack tape. Two MCI desks and a Studer console are represented, and they sound pretty damn good to my ears. The Studer console, band C in each case, is particularly potent, with just a dB or two of high-mid lift being enough to completely change the apparent tonality of a source.

Finally, the compressor section also replicates the dynamics processor "included in a well‑known console built in 1982 by a famous Swiss Company". This can be operated in Comp[ress] or Lim[it] modes, and Acustica's recreation of it includes all their usual additions such as a wet/dry mix control for parallel compression, and the SH Mod parameter that changes the slope of the compression onset. It would be a versatile compressor even without these, and with them, it's more than equal to anything you care to throw at it.

Each of Taupe's three processing modules is available as a separate plug-in. This one is earning its keep taming a slightly edgy guitar track.

If all Taupe offered was emulations of MCI and Studer consoles, it'd be a product with relatively limited appeal. It's the tape module that is the star of the show, and rightly so, because it does things that no conventional processor can do. It also sounds unlike any other tape emulation plug-in I've tried.

I began by trying it on the master bus. Lately, I've been preoccupied with getting my mixes to sound as crisp and bright as commercial tracks without introducing harshness or hollowing them out. A broad high-frequency boost from a Pultec-style EQ can be one way of achieving this; Taupe, it transpires, provides another. Selecting a sympathetic tape sample set allows you to 'push' the upper mid-range that bit harder, to create mixes that have more impact and bite without coming across as brittle. Alternatively, if a mix is sounding thin and brittle to start with, choosing a different machine can help to thicken up the low mids and soften the top end.

The effect of hitting the tape hard varies depending on the source. I found it hard to drive Taupe into obvious distortion, but cranking up the input trim often seemed to bring the mix forward, as if all the instruments were pressing their noses against the control-room glass. I mean that as a positive, by the way: it's an effect quite distinct from straightforward mix compression, and one which doesn't mess with your mix balances in the same way.

I had expected Taupe to sound great on the master bus, then, and it does. Likewise, it'll come as no surprise that it provides a brilliant way of making 'pointy' guitars sit in a mix withough losing any of their punch and aggression, and of adding either thickness or upper-mid 'snap' to a recorded drum kit, depending on which tape machine you load up. Where it did surprise me was in what it can do for vocal tracks. One of the mix projects I had to deal with during the review period featured a female singer whose voice was both thin and varied in level from word to word, to the point where no amount of compression or automation would make it sit at a consistent level in the mix. Selecting a tape machine with a smooth roll-off above 10kHz and piling on the input gain made a huge difference: the vocal sound became firmer and thicker without being muddy, sibilants were less troublesome, and the apparent level seemed to even itself out. It was the audio equivalent of having your car serviced and realising just how roughly it had been running beforehand!

Prior to installing Taupe, I used Slate Digital's Virtual Tape Machines plug-in quite a lot. I still like that plug-in, and what it does can be described using the same subjective language: it thickens and enriches the mid-range, and pulls sources towards the front of the mix. Taupe offers a much wider range of tape machines, with a wide range of sounds, but somehow none of them is similar to VTM. Whereas Slate's processing seems most apparent in the low-mids, Taupe can add crispness and sparkle much further up the spectrum, and the difference is even more apparent when it comes to dynamic response. In my experience, when you push VTM hard, the audible effect is to generate harmonic distortion. With Taupe, by contrast, it's the complex dynamic effects of tape compression that grab the ear, rather than saturation.

Using Taupe also brought home to me just how much work Acustica have put into refining their technology. Some of the earlier plug-ins in the Acqua series were slow to load, hogged CPU resources, and employed user interfaces that could politely be described as unconventional. I think that with Taupe, they have now reached the point where the user experience is almost indistinguishable from using a straightforward modelling plug-in. Loading presets and changing EQ modules still isn't sonically seamless, but it's very fast, and even on my ageing laptop, I could run multiple instances without difficulty. On a top-spec new machine, I'm sure you'd have no trouble using Taupe on every track in a mix — and I'm sure the results would be great. I'm almost tempted to fork out for a new computer just to enjoy it to the full!

Acustica Audio say that 10,000 minutes of sampling tme went into creating Taupe, and it shows. This is a labour of love, and you don't have to be nostalgic for the days of tape to find it an inspiring mixing tool.