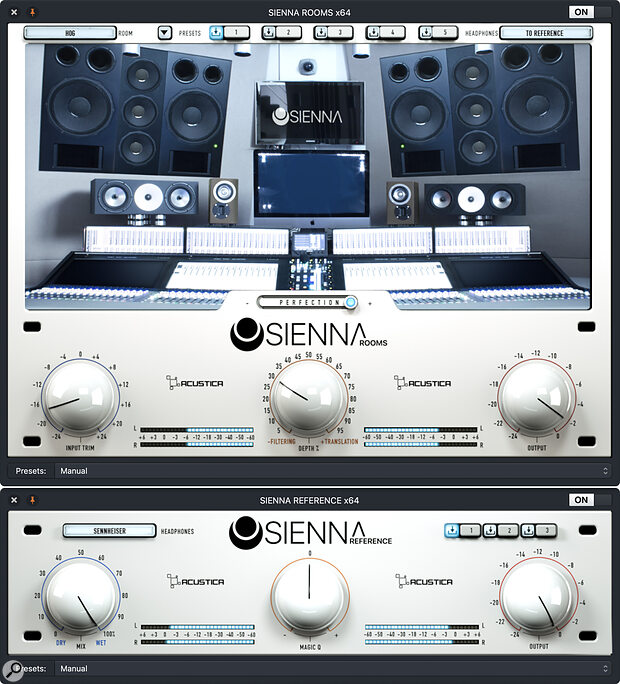 What can the dynamic convolution experts bring to the world of headphone monitoring?

I use a lot of Acustica’s ‘dynamic convolution’ plug‑ins, but my interest was piqued when they told me of their plans to launch a filter‑based headphone correction system with dynamic convolution emulations of monitor speakers in real studio control rooms. Called Sienna, this suite of four related plug‑ins (AAX, VST 2 and 3 and AU, Mac OS 10.9 onwards and Windows 64‑bit) and two optional expansion libraries is now available and I’ve been testing it for a few months. Download and installation is courtesy of Acustica’s Aquarius app but, curiously, you must find the product listing on the web rather than the desktop version of Aquarius to download the manuals, which I consider essential reading.

We’ve discussed the intricacies of headphone design and correction in SOS before so I won’t dwell on them here; Sam Inglis’ SOS October 2018 interview of headphone designers and software developers (https://sosm.ag/reference-headphones) is a good primer. To cut a long story short, there isn’t a universally ‘perfect’ headphone response, due both to the variations in the ear and head size/shape of the wearer and, to some extent, our personal preferences. Acustica start with technical measurements and a mathematically generated filter to ‘correct’ headphones to their own target curve, but then tweak that filter in light of listening tests. They also limit the maximum gain in different bands, to avoid causing problems, such as increasing distortion in the headphones. Their head honcho Giancarlo Del Sordo explains, in surprising detail, how they arrived at this approach in The Headphone Whisperer, a free eBook about the development of Sienna (http://sosm.ag/acustica-sienna-ebook).

Sienna now boasts profiles for around 200 different headphone models and Acustica are still adding more. The models range from cheap to aspirational, and for some there are multiple profiles; Acustica say these account for minor changes in the design or manufacture of specific models, or offer a ‘smoothed’ curve. For example, there are three curves for the Audeze LCD‑X and two for the Sennheiser HD650. In The Headphone Whisperer, Del Sordo also offers his opinion of various headphones and recommends using Audeze LCD‑X (and planar magnetic models, generally) with Sienna, due to their low distortion and impressive low‑end performance. I can understand why: Sienna makes all three headphones I used with it (Audeze LCD‑X, Sennheiser HD650 and Beyerdynamic DT250) better as critical listening tools and arguably reduces the quality gap between them — but it does not make them equal! 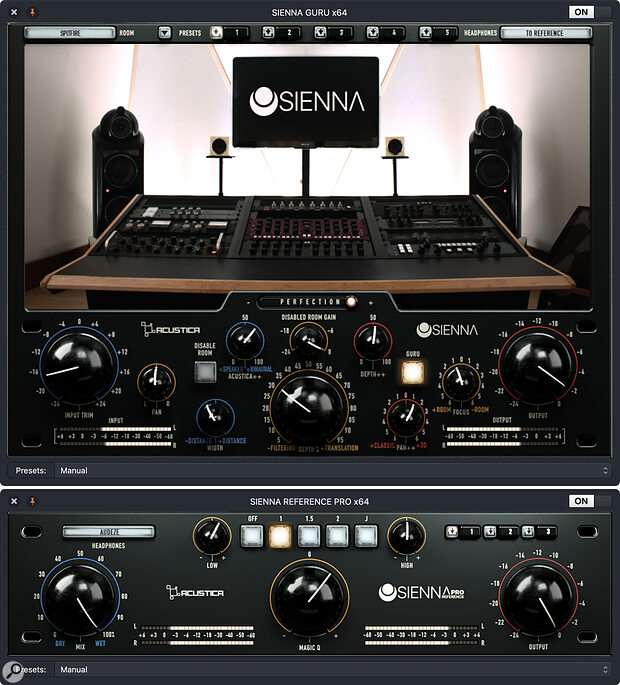 Sienna Guru (top) with the B&W speakers in Spitfire mastering studio selected, and Reference Pro. Both plug‑ins are a little more tweakable than the ‘standard’ Rooms and Reference, but there’s a significant learning curve if you want to understand how to get the best from them.

Reference has only a few controls. First, you choose your headphones from the drop‑down menu; on selecting them, the manufacturer name is confirmed on the GUI but, strangely, the model isn’t. Wet/dry mix and output level knobs flank a Magic Q control, which is the only thing I found I wanted to tweak here. Setting it is a matter of taste: fully anti‑clockwise, the correction is to a linear target and as you turn it clockwise the target morphs to a response more like loudspeakers in a room. “Specifically,” Del Sordo tells me, this custom target “is a very smooth version of a curve for diffuse fields, very smoothed”. The default 50‑percent position seems well judged to me, and while I did tweak it I didn’t stray too far from that. Del Sordo suggests, though, that if you’ve grown accustomed to Sonarworks’ correction curve and wish to try the Sienna Rooms emulation, you might prefer to set Magic Q to zero.

Reference Pro’s additional buttons apply small EQ dips, intended to counter problems for people with particularly narrow ear canals. From a practical point of view, you resort to these if you can’t obtain a satisfactory sound using Magic Q: find the nearest setting and try all the buttons to see which yields the best result. There are also variable ±6dB high/low shelving filters at 10kHz and 50Hz, and a small LF boost seemed to improve the balance of my Sienna‑corrected but rather time‑worn HD650s.

Given that Acustica are based in Italy and Sienna was developed during the Covid‑19 pandemic, it’s perhaps not surprising that there are no emulations of famous American or British studios here. But while there’s scope to add more emulations over time it’s debatable how necessary that is — Sienna already offers some wonderful speakers captured in very impressive spaces.

The bundled Volume A library has speakers in Acustica’s own studio, House of Glass Studio in Viareggio, and Spitfire mastering studio in Pescara. There are also speakers sampled in an anechoic chamber. You’ll find NS10s as well as more recent nearfields by Amphion, Focal and ADAM (some both with and without a subwoofer) and even the massive soffit‑mounted mains in HOG.

The sampling approach means the room/speaker pairings are fixed, of course; you can’t take a speaker from one room and place it in another. But there are many more combinations to explore in the expansion libraries. Volume B adds several speaker/room pairings, with Auratones and a couple more NS10s thrown into the pot, and also what I think are the best‑sounding monitors here: high‑end speakers from the likes of Quested, PMC, B&W and Meyersound; the B&W speakers in Spitfire are my current favourite. Volume C boasts an array of secondary references, ranging from an iPhone, iMac, MacBook and TV sampled in an anechoic chamber, to a car stereo and a couple of high‑end ‘audiophile’ systems in some fairly lively listening rooms.

A Perfection slider morphs between the sound of the speakers as captured in the room and a corrected version — akin to using DSP room correction.

You select the emulation in Sienna Rooms or Guru and the central studio picture changes accordingly, with power LEDs discreetly indicating which speakers are ‘active’. A Perfection slider morphs between the sound of the speakers as captured in the room and a corrected version, akin to using DSP ‘room correction’. The Input Trim is effectively a loudness‑compensated ‘drive’ control that pumps more volume into the virtual room, causing more distortion: for monitors, less distortion is obviously better, but for some of the consumer reference profiles I found it useful. The central control, Depth, is rather puzzlingly labelled. Ranging from ‑Filtering to +Translation, It’s basically an HRTF control, catering for the differences in perception due to individuals’ heads and ears. The default 30 percent setting is a medium HRTF, and I didn’t find that I particularly wanted to change it.

At the top are two preset systems, one a drop‑down menu for the factory presets (organised into menus of those with rooms/speakers and those which affect only the plug‑in’s controls), and the other an array of five button/arrow pairs for user presets. Clicking on an arrow stores the current settings in that ‘slot’ and clicking on the button recalls them. These presets apply to all instances of the plug‑in that you load in any application and work well enough, allowing you to switch quickly between, say, your main speakers, a set of NS10s, Auratones and a car stereo. That said, I wish that there were some means of naming presets; it’s too easy to forget what’s where and thus to overwrite the wrong one.

Guru’s default GUI is almost identical to Rooms, but click on the Guru button and many more controls are revealed; they’re useful but you must tread with care. Acustica++ is basically a crossfeed EQ: anti‑clockwise for more separation (ie. sounds panned fully left appear in the left headphone driver only), or clockwise for a more binaural experience. The 50 percent setting combines the two approaches, resulting in a nicely focused centre position that’s rather like having a centre speaker set up. Width simulates moving nearer to or further from the speakers, altering the angle/width of the speakers. Depth++ increases the amount of Sides signal. Focus alters the balance of speakers‑only and speakers‑in‑room sounds: if you find the room sounds nice but is a bit too much you can easily dry things up. Pan++ modulates between panning based more on inter‑aural level or more on inter‑aural timing differences; Acustica say they implemented this because some users expected a greater level difference between channels when placing sources with a pan control; again, a matter of taste.

Finally, the L‑R Pan control is useful when judging adjustments made with the other controls: hearing the signal in only the left or right channel makes it easier to match the sound stage to that of your own speakers, which can be a great way to get to grips with Sienna.

Despite Guru catering for the tweakaholics, using Sienna can be as simple as instantiating Rooms and loading room and headphone profiles. Initially, I found it a tad unsettling not seeing on a plot what correction was being applied but soon concluded that such a display is unnecessary. It’s far more important that you spend time listening to a good range of well‑mixed reference tracks, in a variety of genres. Do that and it all starts to make good sense.

Being plug‑ins, you must insert them on your DAW’s stereo bus or, better since there’s no automatic bypass when performing an offline bounce, on a dedicated control room or ‘listen’ bus. In other words, there’s no ‘systemwide’ version, which would make listening to reference material easier and ensure a consistent headphone sound when listening to sources from outside the DAW. Instead, I’ve been hosting Sienna in Rogue Amoeba’s nifty, Mac‑only Audio Hijack app, which achieves the same end. 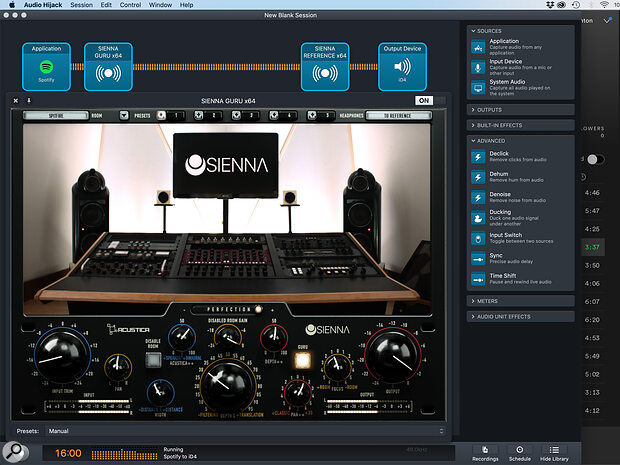 There may be no ‘systemwide’ version of Sienna yet, but third‑party apps including Audio Hijack can allow it — or other plug‑ins, such as meters — to be used in that way.

I also used Audio Hijack to compare Sienna’s headphone correction with that of a number of competing products, including Sonarworks SoundID, Audeze/Embody Reveal+ and dSONIQ Realphones. For both the LCD‑X and HD650s my preference was definitely Sienna. It addresses my tendency to mix bass‑heavy/top‑light on my uncorrected HD650s and wakes up the LCD‑X’s upper mids; they sound great but can be just a little too ‘forgiving’ there.The correction does a decent job, then, but it was the speaker/room emulation that really made my jaw drop. Not every space will be to everyone’s taste but they’re all decent, and Spitfire is particularly impressive. The bass is conveyed in a very believable way, both from the bigger speakers and when switching between nearfield setups with and without a sub.

With things set up to my satisfaction, if not for the physical weight and pressure of the LCD‑X headphones on my head, I could well believe that I’m listening to quality speakers in a great room. I can’t claim to have tried all competing products and, notably, I’ve not yet used Slate’s VSX, of which Del Sordo speaks highly. But I have used several, and I’ve heard nothing like as convincing an emulation as this. I’m genuinely very impressed, and I can’t wait to see where else Acustica take this technology.

Used with decent headphones, Sienna can deliver a superbly convincing emulation of listening over good speakers in a nice, acoustically treated space.

Sienna Volume A, including the plug‑ins €149. Volume B and Volume C (expansion libraries, which require Volume A to host) €69 each. Prices include VAT.