Gainstation is a collaboration between Italian plug‑in developers Acustica Audio and Studio DMI, this time involving producer Mike Dean (Kanye West, Jay Z, Travis Scott, Drake). Described as a “distortion and creative sound mangling device”, it’s Acustica’s first dedicated distortion plug‑in and its aim is to provide a quick and easy tool for adding “power, juice and dimension” to your audio. While Gainstation will be my main focus here, I’ll also consider the lower‑priced Gainstation Boost, a slimmed‑down version that’s based on the same technology.

Gainstation is less fiddly than it might appear at first glance, and after just a few minutes I had a pretty good grasp of all the controls. Still, I recommend reading what’s one of the better manuals I’ve encountered in recent years. The two large knobs on either side of the GUI are input and output level controls — you increase the input to drive the processing chain harder. The processing action begins in the preamp section, which offers you four different flavours of analogue saturation, selected with ‘M’, ‘I’, ‘K’ and ‘E’ buttons. (The producer’s surname is spelled out by similar buttons for the clipper, of which more later.)

The preamps and the wide‑ranging trim control allow Gainstation to deliver anything from subtlety to total oblivion. Crucially, this trim control for the preamp section is designed so that as you increase or decrease the level, the perceived volume remains the same. This might sound like a small thing but it makes a huge difference when it comes to dialling in the right sound, as you’re seduced only by the tonal change; your ears aren’t fooled into thinking something is better when really it’s just louder.

There’s no information provided about what devices the different preamp flavours are based on, but Acustica do explain that “Gainstation is based on a series of hardware units that have been carefully selected and modded by Mike Dean himself.” They all sound good, but I didn’t initially notice a huge difference in character between the four preamps. They do seem to interact differently with other stages though. For example, a couple of the options seemed to help drive the clipper section more into full‑on distortion territory than the others did.

There’s an impressive range of options for driving the bottom end: you can achieve anything from a subtle lift to full‑on speaker rattling.

A fairly simple but high‑quality EQ section offers only Bass or Air boosts, at 60 or 100 Hz and 3 or 10 kHz, respectively. While a dedicated EQ plug‑in will offer more control, these two boost bands have been very well judged. Much of the mixing process for the sort of musical styles you might associate with Mike Dean is focused on creating a powerful low‑end (808‑style kicks are a common component), and distortion/saturation can be a crucial tool in getting bass information to ‘speak’ on smaller speakers. The Bass EQ band is particularly impressive. Between the preamp section and cranking up the bass control, there’s an impressive range of options for driving the bottom end: you can achieve anything from a subtle lift to full‑on speaker rattling.

The 10K option on the ‘Air’ section does what it says on the tin. I was able to use it to breathe some life into a limp‑sounding drum loop, without the hi‑hats becoming thin or harsh. The 3kHz setting also worked very well for adding bite or definition to snare drums, guitars and vocals that needed it. 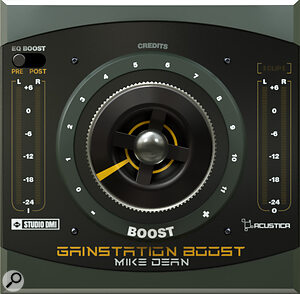 Gainstation Boost offers the same sound as the ‘full‑fat’ version, but with fewer features and options.The Spread control is a Mid‑Sides processor that allows you to adjust the level of the Sides component. It’s a simple tool but a thoughtful inclusion, which makes it easy to experiment with the width of kick samples or bass sound in minimal arrangements, or to add subtle spread to sub‑mixes or the master bus. This sort of control can also be really handy to reduce the sense of spaciousness in drum loops when they need a bit more. The routing section, which uses a simple colour‑coding system, changes the order of the processing stages in the signal chain and can make a big difference to the end result.

By default, the last section is the Clipper, which allows you to lightly shave off transients or contribute more significantly to the mangling of whatever you throw at Gainstation. I tended to find that a little went a long way, but this clipper can help you to make things really loud if that’s your goal. Moved to the start of the chain, it can also quickly push sounds into full‑on crunching distortion. There’s a huge range in level and outcomes to play with here!

Gainstation Boost is a smaller version with just two controls, and it consumes fewer CPU cycles. But while there’s less scope to dial in specific sounds, what it can deliver sounds just as good as if you were using Gainstation. The Bass EQ is fixed at 60Hz, the Air band at 10kHz and the Clipper stage at its D setting. One large knob drives this signal chain, and there’s just one other control: a switch to select between two internal routing configurations. There’s something nice about a good‑sounding tool that has such minimal options, though I do think it would benefit from the addition of an output trim control.

Acustica’s current crop of products sound great. They remain relatively CPU intensive, but any inconveniences are almost always tolerable given the sonic quality. I often find that a single instance manages to do a job it might otherwise take three or four other plug‑ins to achieve. Their EQs always seem to sound particularly good — with the preamp stages engaged, they’re the closest to high‑quality analogue gear that I’ve heard in software, and the EQ section in Gainstation certainly does not disappoint.

There’s a lot more going on in Gainstation too, but it’s always easy to use and it gives you access to a surprisingly broad sonic palette with relatively few controls. At a basic level it excels as a tool for crushing a source into oblivion or making drums pop out of the speakers, but when used with finesse it can be a wonderful mix‑bus processor. I thought a parallel blend control and high‑pass filter could be useful additions but Acustica explained that the plug‑in was built to model only the stages used in Mike Dean’s personal setup.

Despite those small omissions, I’m a big fan of this plug‑in: if you work in any genre that’s receptive to some attitude adjustment, enlargement or excitement, Gainstation and Gainstation Boost are both worth checking out.

Acustica’s first dedicated distortion processor sounds wonderful, and has a range of potential applications from the subtle to utter carnage !