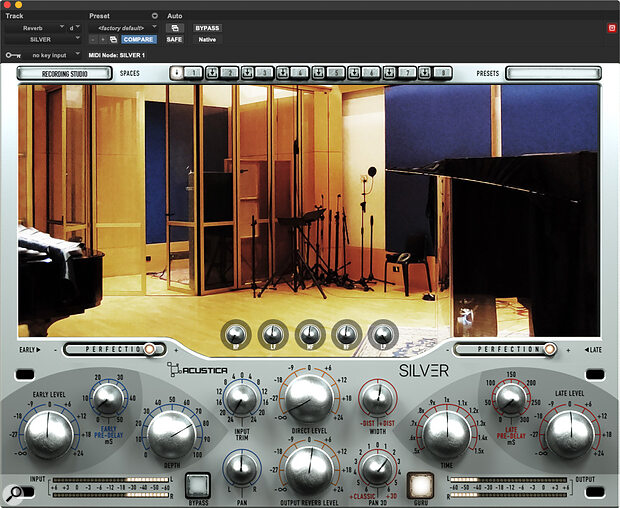 The masters of convolution have finally produced a reverb, but it’s far from being a straightforward convolution reverb.

When we hear the word ‘convolution’, we half expect it to be followed by the word ‘reverb’. But the developers who have done the most to push the boundaries of convolution have, until now, used it for practically everything except reverb. There have been reverb IR libraries for Acustica’s Nebula, and the Ebony channel strip plug‑in includes a reverb, but Silver is Acustica’s first dedicated reverb plug‑in.

The Silver plug‑in itself is free, and comes with four presets to show off what it can do; Acustica aim to make their money by selling additional Volumes of content. However, these are not conventional impulse response libraries, and Silver is not a conventional IR player.

In developing Silver, Acustica identified two long‑standing problems that, they feel, afflict convolution reverb in general. One is that basic convolution can only capture a ‘static’ impression of a space or other reverb generator; it can’t recreate the subtle variations, modulations and non‑linearities that contribute to the sound. The other is that acoustic and electro‑mechanical sources of reverb are, by their very nature, imperfect. Even halls that we perceive as sounding good exhibit resonances and other behaviours that can become problematic when IRs are captured and applied to dry sounds.

To combat both of these tendencies, Acustica have developed a proprietary technology that combines machine learning and conventional DSP techniques. This applies what they call ‘micro‑equalisation’ to correct resonances and imperfections as they occur, and ‘crossfeed’ to add motion to the sound. Although details are scant, these seem to be paired with a proprietary measurement technique that captures the properties of a source space in a rather different way from conventional IR recording.

Acustica have developed a proprietary technology that combines machine learning and conventional DSP techniques. This applies what they call ‘micro‑equalisation’ to correct resonances and imperfections as they occur.

A Is For Reverb

At launch, only one Volume is available, containing over 120 samples from 77 different physical spaces. About half of these represent recording studios, churches, concert halls and other environments relevant to music production; the rest are drawn from domestic and other interiors of the sort that might be used in post‑production. Volume A takes up some 10GB of drive space and, like the Silver plug‑in itself, is downloaded and authorised painlessly through Acustica’s Aquarius utility.

The Silver plug‑in itself, meanwhile, comes in three variants. As far as I can tell, the only difference between the full‑fat Silver and Silvers Lite and Mini is that the latter have progressively fewer EQ options. I’m not sure why this quite justifies creating separate plug‑ins, but of course if the EQ uses Acustica’s usual convolution‑based technology, it might represent something of a CPU burden. The basic interface presents a manageably small number of parameters, mostly controlled by knobs; activating Guru mode makes visible some less‑used controls, but it never gets too crowded or intimidating.

Like algorithmic reverbs, Silver allows for the separate manipulation of early and late reflections. So as well as global control over the wet and dry signal level, there are also large dials for the relative levels of these contributions. Sensibly, all of these retain their settings when a new space is loaded. It’s also possible to vary the duration of the late reflections between 50 percent and 150 percent of their ‘true’ decay time, but the most intriguing controls are the two small sliders labelled Perfection. Again relating to the early and late reflections, these set the extent to which they should be ‘linearised’ or micro‑equalised by Acustica’s whizzy processing.

The labelling of the three other main controls is a little confusing. Depth is what I would usually consider a Width control, adjusting the level of the Sides component to push the reverb outwards. Width and Pan 3D, meanwhile, are part of the Guru parameter set, and govern crossfeed delay and gain settings within the late reflections part of the signal. All of them affect the ‘stereo‑ness’ of the signal in noticeable ways, Pan 3D being the most obvious, but none seems to act as a straightforward mono‑at‑one‑end‑super‑wide‑at‑the‑other parameter.

Beyond that, there’s relatively little user control other than separate pre‑delay settings for early and late reflections, a slightly redundant Pan control and the EQ, which is extremely simple even in the full version of Silver. Other users have reported CPU load to be quite intensive, but this wasn’t obvious on my machine, so I rarely bothered loading the ‘lite’ versions. Artefacts and glitches are noticeable if you adjust parameters during playback, though.

The Silver Mini plug‑in is functionally identical to the full version apart from its EQ options, but takes up less screen space.

There’s often a lot of hype about new plug‑ins, especially where some sort of technological breakthrough is claimed. This isn’t always justified by the results, but having tried Silver, I am convinced that it does have something different about it. Compared with other artificial reverbs, both algorithmic and convolution‑based, it simply sounds less like reverb that’s been added after the fact, and more like something that was recorded with the source. For rock and pop mixing, I quickly gravitated towards using the spaces captured in studio live rooms — on drums, acoustic guitars, electric guitars, keyboards and in fact almost anything. Unless you really crank these up, they often don’t make the source sound noticeably reverberant at all; their effect in small doses is almost subliminal or subconscious, but real nonetheless. It sometimes feels as though you’ve simply moved the instrument into a different room.

If you like to lean heavily on ambiences and subtle room‑type reverbs, then, Silver has the potential to make a big difference to the quality and naturalness of your mixes. Move up in scale to the churches and theatres, and what you really notice is that it’s easy to get a balanced sound across the frequency spectrum. I never found myself in that situation where you’re having to use narrow‑band EQ to stop something booming or ringing out in the reverb. In fact, I rarely found I wanted or needed to use EQ at all with Silver. However, one thing to be aware of is that if you reduce the default pre‑delay time to zero, the early reflections arrive instantly rather than after a few milliseconds, as they would in real life. In some circumstances, this can cause unwanted comb filtering and phasiness.

The action of the Perfection sliders is interesting. The manual states that the leftmost or minimum setting delivers the ‘unimproved’ or raw sound of each space, but in practice I often found this to resemble a lo‑res MP3. I suspect that Acustica’s processing creates some sort of model or synthesis of the space rather than applying IRs directly, and that in its raw form this tends to sound unsophisticated, or perhaps even emphasises unwanted resonances and so on rather than suppressing them. At any rate, there’s a good reason why both sliders default to the halfway position! Further increasing Perfection from there reduces harshness and honking, but it also does more than that. Applied to the early reflections, it seems to further ameliorate any comb filtering that can result when dry and wet signals are recombined, and to stop transients sounding splashy. On the tail, meanwhile, it smooths things out, counteracting any tendency towards ‘tearing’ or ‘barking’ (for want of better words) and sometimes slightly reducing the apparent decay time by curtailing ringing. Higher Perfection settings also seem to preserve the high end more faithfully. You could perhaps achieve a little of the same effect by placing a plug‑in like Oeksound’s Soothe or Soundtheory’s Gullfoss in series with a reverb, but it certainly wouldn’t be the same.

There’s clearly huge potential here, then, but it should be noted that Volume A doesn’t cover all bases. It’s fantastic for natural‑sounding rooms, and there are some lovely churches; but studio staples such as plates, springs and chambers are absent, and most of the hall‑type spaces seem oriented more towards post‑production than music. I think you’d struggle to put together a convincing pop vocal treatment using the Volume A spaces alone — but that’s not really a criticism because, as the name suggests, more Volumes will be forthcoming. In fact, just as we went to press, Acustica announced Volume B, a library of plate reverbs for Silver. If they can improve on real plates in the same way that Volume A does on real spaces, then Silver could be a first‑choice reverb in every role.

Silver is capable of integrating source and reverb with a natural quality that even other convolution plug‑ins struggle to match.