A reboot of the first dedicated Ableton Live controller brings with it many welcome improvements.

Hardware companions to music software are now commonplace, but when the original APC40 launched in the pre–iPad days of 2009, it was one of the first of its kind. In my original review I was enthusiastic, bar a couple of layout gripes and feature requests. I’m happy to say that these have almost all been addressed in this new version without losing any of the essence of what made the MkI so usable. The question now is whether Akai’s take on what makes an Ableton Performance Controller stand up against the alternatives that have come since...

The new APC is significantly more compact that the original. The bulky bevelled surround is gone, and the launch pads are now slim rectangles instead of squares, trimming the size in all dimensions. The unit is also much lighter, which is a good thing for the travelling performer, right? Well yes, but it is a by–product of cheaper, more plastic, materials. The MkI was built like a piece of traditional pro-DJ equipment, with a tough metal enclosure and replaceable crossfader module. The MkII has more in common with modern music tech commodities that spend most of their time in the studio. That being said, it seems well built and sturdy enough to survive being carted around in a padded gig bag.

The core of the APC40 remains the 9x5 clip-launch grid, laid out above faders and track controls to mimic Live’s Session View. This maps to eight tracks at a time in Live, plus the Master and Scene Launch column. As well as the shape change, the most noticeable change is that the MkII’s pads are now fully multi–coloured, upgraded from the MkI’s green/yellow/red. This allows the pads to reflect clip colours from Live, as well as to show which clips are playing or recording. As before, cursor buttons move the grid around the Session View in single row/column steps, or whole banks with the Shift key. The Shift key also shows a high-level overview of the whole Session on the pads. The new shape and colour–coding significantly improves the visual link between the hardware and software. 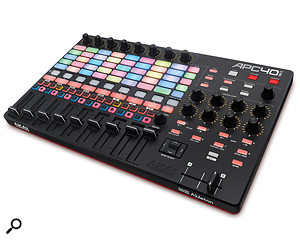 The track controls also have some great improvements. The channel rotary encoders have moved from the right–hand side of the panel and taken their proper place in line with the tracks. That answers my main layout concern about the MkI. These pots are switched between Pan, Send, and User modes. The pots themselves are of a similar spec: endless encoders with 15–segment position indicators. The design has been updated, though, with a lower, wider profile with quite a heavily damped action. Although this makes them feel higher quality, it does make them somewhat resistant to fast changes. A move to motorised faders would have been great, but would have increased the cost and, presumably, reliability. At least Live’s Scale Takeover mode removes the volume jumps when moving faders.

The designers at Akai haven’t stopped at tweaking the APC’s form–factor and layout, they’ve also looked at integrating it a little further into the Live experience. When composing you still have the core workflow of selecting and arming tracks from the surface, with control of the Devices in the selected track. The MkII maintains my favourite feature, which is the control pots mimicking the 2x4 Macro layout used on the top panel of Live’s Rack Devices. In line with recent versions of Live, you now have two Record buttons, one for traditional Arrangement recording, and the Session button for punching into clips in the Session view.

For live performance and arrangement, in addition to the essential clip and scene launching, you now have a dedicated A/B button on each track for routing to the crossfader. Although the original APC had a physical crossfader, assignments had to be made in the software. This access to the crossfade functionality in Live’s mixer marks the APC MkII out against the mounting opposition. The buttons in the Device Control section now do more useful things for performance, and you get a Lock button for when you want to tie the controls to a particular instrument or effect, no matter what else the surface is doing. Additionally, there are also now dedicated Bank buttons for flipping the controls through multiple parameter pages.

Composers and performers alike will appreciate the User mode on the main channel rotaries. On the original, the knobs could only be switched between Pan and Sends A–C; now a single Sends button gives access to up to eight Sends. The User button switches the pots to generic MIDI controllers, allowing you to use Live’s MIDI Map mode to take control of any parameter. This is important, as the MIDI assignments of the APC are fixed so you can’t override controls. On the MkI, the best you could do was use one bank of Send controls for other purposes and avoid using that Send ID in Live. Now you have a bank of eight custom controls.

It’s hard to fault the APC40 MkII as an update to the APC40. Akai have refined the choice of controls and layout and, at least for me, delivered on user requests. The new shape and multi–colour capability of the pads really bring the clip grid to life (though an upgrade to eight rows would have been welcome). However, the MkII faces stiffer competition than its predecessor, in particular from Push and the Novation Launchpad Range. The upcoming Launchpad Pro will make this space even more lively. While there’s a lot of crossover between these products, there are genuine points of difference that will steer you toward one or the other. Push and the Launchpad Pro are very tempting if you want a combined pad instrument and launcher. The other Launchpads have a price advantage, but don’t forget the cheaper members of the APC range. That said, for live performance and arrangement, with its faders, rotaries and crossfader integration, the APC40 MkII is the closest thing to the Live Session View experience in hardware.

There are a lot of products that overlap with the APC40, not least, of course, being Ableton’s own Push. Push costs well over £100$200 more, but gives you playable pads and sequencing, in addition to clip launching. It also benefits from the display–supported, touch–sensitive rotaries for device control and, uniquely, browser integration.

Novation’s Launchpads are also in the running, offering more clip rows, and a competitive feature set when paired with the Launch Control XL. Up until now they’ve been limited by tri–colour buttons, but the upcoming Launchpad Pro boasts multi–colour pads and velocity sensitivity, nipping at the heels of Push for less money than the APC40.

Finally, there are iPad apps to consider: touchAble and Lemur. Both are incredibly deep and powerful, and can do way more than is possible with a traditional hardware controller. But of course the touchscreen cannot match the tactility and predictability of dedicated pads, pots and faders.

Alongside the launch of the APC40 MkII, Akai have extended their Ableton controller range with the APC Mini and APC Key 25 (the original APC40 and 20 are also still available). The Mini loses the right–hand side, and all the knobs, leaving just the clip launch grid and mini faders. There is also just one button per track, each of which serves multiple functions, including banking as well as all track functions. These buttons can also flip the faders into different modes to control Pans, Sends and Devices, as well as the actual track faders. It’s clever how all this is crammed in, but obviously this can be fiddly. However, the Mini has one distinct advantage: eight rows of clip launch buttons instead of five. This means noticeably less banking, and more visibility into the Session, and I would have liked to see this on the APC40 as well, even if it required a larger surface area.

The APC Key 25 is similar to the Mini, but with the faders replaced by a bank of eight knobs and the whole thing set into a two–octave keyboard. Space also dictates that you’re back to five rows of clip buttons on this device. Both the Mini and Key 25 are cheaper controllers than the flagship 40, with the Mini coming in at £69.99$99.99, undercutting Novation’s Launchpad Mini. This is incredibly affordable, but does come with some sacrifices: the build quality is lower, and the launch buttons are only tri–colour (Yellow, Green, Red), like the original APC.

A well-executed upgrade to the APC, bringing better layout and portability. Still the most direct hardware rendering of Live’s Session View.