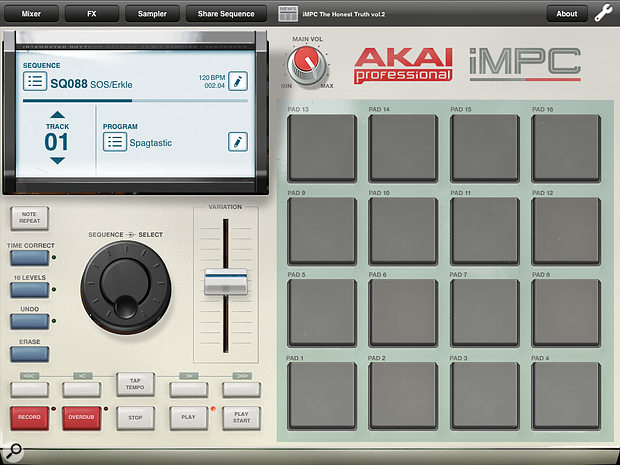 With a long and enviable pedigree in hardware sampling and sequencing, the Akai MPC range has finally gone soft. I'm referring to the barrage of recent kit to emerge: the MPC Renaissance and Studio, plus, for the iPad owner, the MPC Fly. This neat little controller has an integral case, drum pads and iPad-ready compartment, but it's the app, iMPC, which is already available, that we're checking out today.

This heavily simplified MPC for iOS runs happily without the Fly and has just four tracks, each with 16 pads to trigger samples. When you put 16 samples together, you've built your first program, but don't worry: Akai supply a selection ready-made, so you can hit the ground running. As well as programs, there are over 1200 individual samples and just under 90 sequences primed and pimped to demonstrate what the iMPC can do. The samples consist of Akai classics and iMPC-specific creations, all categorised according to type. It's enough to get you in business, and some of the drums, in particular, are stonking.

The maximum length for any sequence is 999 bars and, helpfully, each sequence remembers the tempo it's been given. Further conveniences include the handy 'duplicate bars' option, which enables you to build quickly from a short, simple loop into a longer, more complex structure. In accordance with MPC tradition, when you select a different sequence during playback, it's cued to play when the current one ends. Thus you can manually assemble song performances from shorter segments.

There are two record options, Record and Overdub, with the former wiping previous takes on the selected track and the latter designed to build up your masterpiece over multiple loops. If you make a mistake, you can erase entire tracks or the recordings of individual pads, while small performance errors can usually be tidied up using the Time Correct button. It's your choice whether to make corrections during recording or afterwards. Similarly, Akai's MPC swing adds its characteristic delay of even-numbered beats.

The pads feel responsive enough (as iPad apps go) and with Akai's famous '16 levels' option activated, their role is switched from sample triggering to the transmission of 16 different filter values, velocities, note lengths or tunings for the selected pad. In the case of tunings, this provides a means of banging in melodies and bass lines, thus extracting extra mileage from the limited pool of samples available to each track. For more conventional control, a Variation slider provides smooth changes to the same four parameters. Finally, 'Note Repeat', another MPC stalwart, has six repeat choices ranging from 1/8th notes to 32nd-note triplets.

Finished sequences can be exported via iTunes, shared with SoundCloud users and copied to the audio pasteboard, although this last option takes a bit of finding. However, I failed to discover any way to eliminate the constant messages from the iMPC community that litter the top line of the app.

No MPC would feel complete without sampling, and here the implementation is workmanlike but effective. In addition to recording from the iPad's regular inputs, iMPC will eagerly lift material from your existing music library. The 'deck' used for this function has pitch adjustment, a moveable arm, and even scratching, which you can indulge in during recording if you're that way inclined. The resulting sample can be trimmed, named and categorised in a process that's decidedly no-frills. There's no other editing, let alone loop slicing, but you can at least paste in samples from the clipboard. 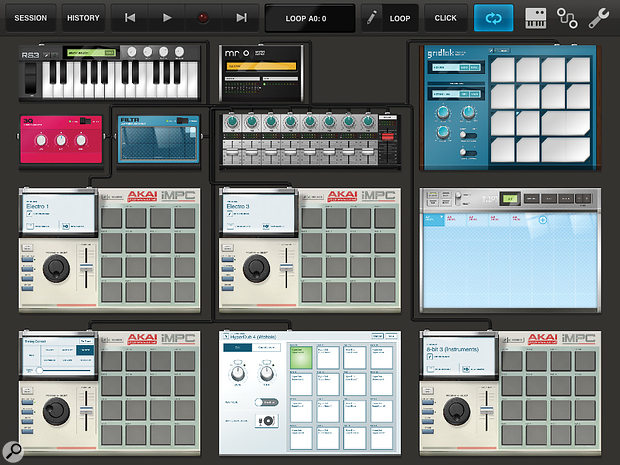 The remainder of iMPC is quite basic, consisting of a mixer and effects, specifically a bit-crusher, delay and compressor. The effects structure is unspectacular — even compared to other iPad apps — and the UI isn't too slick either. For example, it's a drag to have to navigate to the mixer page every time you want to solo or mute tracks. The only sync currently provided is WIST, the wireless system created by Korg; there's no MIDI sync or other external control as yet.

In fact, if this were the whole story, we'd be heading towards a fair but undistinguished conclusion. However, there's an extra twist, or rather an extra app, that makes a difference. This is Tabletop and it's a free download. When iMPC runs inside Tabletop, it gains a piano-roll editor, Core MIDI support and extra effects, plus inter-app audio (IAA) routing and performance recording. It's rather kludgy at the moment but if Tabletop is developed further and becomes widely adopted, perhaps iMPC needn't rush to grow its own feature set so urgently. Right now, it lags behind many of the more sophisticated apps, but could still prove tempting, especially to hardened MPC fans.