The recent resurgence of brand-new analogue synths means that there's never been a better time to invest in one. We round up some of the more 'hands-on', performance-oriented models on the market, with links to the SOS review where available. 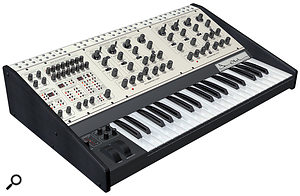 Oberheim Two Voice Pro synthesizer.The Two Voice Pro combines two of Oberheim's much-loved Synthesizer Expander Modules, plus a 37-note keyboard and a sequencer. Up to 99 sequences can be stored in the instrument's flash memory, and sequences can be chained together to make up songs. You can even play two sequences at the same time, or play one while noodling away on the keyboard! It's not available yet, but Oberheim expect to be shipping the Two Voice Pro in the next couple of months. 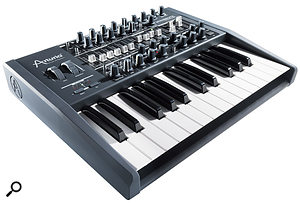 This cute monosynth caused quite a stir when it was released, not least because Arturia had previously only been making software! It's a decidedly 'old school' instrument, however, with every function having its own control. There are four waveforms available (sawtooth, square, triangle and noise), each of which can be mixed in via sliders. A multi-mode filter is on hand, as are two ADSR envelopes, two LFOs, a 'Brute Factor' (distortion) control, and an arpeggiator.

Moog are arguably the most iconic name in analogue synthesis, and their brand-new Sub Phatty promises much of what gives Moog synths their distinctive sound (including the four-pole filter), while benefiting from distortion circuitry that aims to give it a more modern flavour. It has two variable-shape oscillators plus an additional sub-oscillator, separate envelopes for the filter and the ampliifier, and MIDI I/O on both standard DIN and via USB, allowing it to be controlled from other MIDI devices, or a computer. 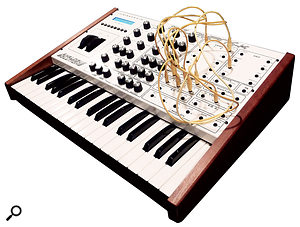 The eye-catching Telemark K has a patch panel built in, allowing you to hook it up to CV (Control Voltage) compatible equipment for severe sonic mangling. The design is based on that of the classic Oberheim SEM, with extra features such as Sample & Hold, a square-wave LFO, ring modulation and a noise generator, plus a plethora of extra modulation options. You'll find video demos of the Telemark K in action on YouTube. 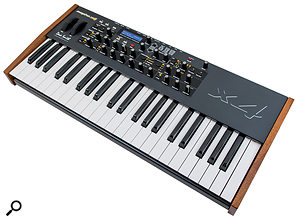 This 44-key synth is essentially four Mopho monosynths rolled into one, and as such has four-voice polyphony. It's not the most control-laden synth — many of the knobs are multi-function — but there's a lot going on under the hood. There are two oscillators, two sub-oscillators, a filter and three envelopes per voice, as well as an arpeggiator and even a step sequencer. And if four voices isn't enough, you can connect it to DSI's own Mopho, Tetra or Prophet 08 synths, for a maximum of 16 analogue voices! 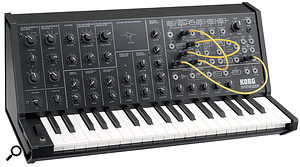 Korg stunned visitors to this year's Winter NAMM show by re-releasing one of their classic synths. The original MS20, with its three-octave keyboard and combined control and patch panel, has earned something of a cult status since it was discontinued in 1983. The new 'Mini' version is identical to the original (even the manual is the same!), except that it adds MIDI connectivity, and has been shrunk to 86 percent of its original size. Keep your eyes peeled for an SOS review sooon!

Buying a vintage synth is not for the faint-hearted — especially with so many great new instruments around...

When digital synthesizers became affordable in the 1980s, their analogue counterparts were widely perceived as yesterday's instruments: dated, limited and often unreliable. Many of the synths we consider classics today were sold off for peanuts, if a buyer could be found at all! Today, of course, vintage analogue synths can command exorbitant prices, while digital models often expend considerable DSP power trying to sound like them. But what exactly is it about this older technology that makes analogue synths so desirable?

Just as with analogue outboard gear, much of what people like about analogue synths is that they're not perfect: envelopes sometimes don't behave as predictably as they're supposed to, filters distort, square waves are anything but truly square, and oscillators aren't always perfectly in tune with one another. Some say it's these imperfections that make analogue synths seem like 'real' instruments, at least compared with the sterile sound of some digital synths.

Of course, manufacturers cottoned on to this sentiment some time ago, and have been emulating these traits in digital instruments and software synths for a long time. Some of these are now extremely good and, if perhaps not always indistinguishable from the originals, they do actually have some advantages. For starters, you'll never do your back in carrying a software licence up a flight of stairs! Digital synths also have the boon that their settings can be saved and recalled instantly, whereas many analogue synths require that you note down each knob's setting with a pen and paper if you ever want to repeat a sound you've come up with. 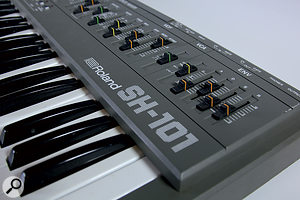 Vintage synths can be wonderful things, but finding one in good condition — and for a reasonable price — may be tricky...

Talking of knobs, one of the other features that is widely valued in many analogue synths is the provision of a control for every parameter. Simple user interfaces make it child's play to create and adapt sounds without having to delve into menus or use buttons and data wheels. This, too, is a lesson that modern digital synth manufacturers have taken on board, and if you're working with soft synths, it's possible to use MIDI controllers to the same end, but even so, some feel that these are no substitute for the real thing.

If you've decided that nothing but an analogue synth will do, the question is whether to go for a new instrument, like those described on the previous pages, or something second-hand. An obvious advantage of new synths is reliability: they're unlikely to suffer from crackly pots, temperamental switches or, worse, failing components, which can be remarkably difficult to get hold of for older instruments. Some modern analogue synths also have the ability to be controlled via MIDI or USB, which makes it possible to control them from a computer, and thus integrate them into a modern DAW-based studio.

And then there's the price tag to worry about! While it might still be possible to pick up a bargain on an online auction site, the days of the fabled boot-sale bargain are gone. Second-hand synth-shoppers can expect to pay around £1000 for an original Korg MS20, for example, while the slightly smaller re-released version mentioned on the previous page will cost half that — and it'll still have that new-synth smell! If you do decide to go for a second-hand synth, it's important to try to look at it in person before handing over your money. Some such synths are decades old, and you could find yourself landed with an expensive repair job before you even get to play a note.

It's not all doom and gloom on the second-hand market, however. Aside from the obvious joy of being able to conjure up iconic sounds heard on countless records, provided you've bought a decent example at a reasonable price, you may well find that your synth's value goes up over time, which is less likely to be the case for many modern instruments.