Apple have dramatically revamped the iMac — and have made it a tempting choice for the studio.

Apple have updated their iMac range. 'So what?' I hear you cry! Since the introduction of the aluminium-bodied, all-in-one iMac enclosure in August 2007, the biggest cosmetic change has been to the aspect ratio of the screen, changed to 16:9 in October 2009. Apart from that, little has changed, aside from incremental performance increases and connectivity options. But now, apart from a rather clever refresh of the iMac's shape, what's inside has also been significantly updated, making the iMac an even more worthy contender to replace the ageing Mac Pro as the desktop machine of choice for recording studios.

Two things struck me as I removed the iMac from its box, and one of them wasn't back pain... Firstly, it's thin. Secondly, it's light. The new enclosure has been designed with bulky items moved to the centre, allowing the edges to have their thickness shaved down to just 5mm. Overall, the volume (of the enclosure, not the speakers) is down by 40 percent, and this helps to give the iMac a much slimmer look. To be fair, however, you really need to look at it from the side to appreciate this! Even the stand, although basically unchanged in design, has been tapered towards the front to increase the aerodynamic feel. The model I reviewed, with 21.5-inch-screen, weighs in at only 5.7kg (12.5 pounds), while the previous model (released in May 2011) with the same screen size tipped the scales at a positively obese 9.3kg (20.5 pounds). Although this makes little difference to the user once it's on the desktop, it certainly is an indication of the direction in which technology is headed, perhaps signalled by the introduction of the positively wafer-like iPad Mini. Eventually you'll have to tether your iMac to the desk in case a gust of wind blows it over when you open the studio door!

This redesign has partly been achieved using a technique borrowed from aeroplane technology called 'friction stir welding', which allows aluminium components to be joined 'at a molecular level'. To you and me, this means that you can't see the join. The other area in which the new iMac has adopted ground-breaking technology is the display. A process called 'full lamination', similar to that used in smartphones, has been employed to eliminate the gap between the LCD and the cover glass. At 2mm, this wasn't large to start with, but its removal reduces glare significantly (by up to 75 percent if you need a number) and allows for a wider viewing angle. I was certainly impressed by the fact that I could no longer see a ghostly outline of my head when using an iMac on my desk! 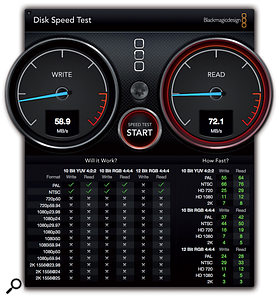 The results for Black Magic Design's Disk Speed Test on a MacBook Pro (left) and the new iMac. As you can see, the iMac drive is doing rather better...

The first major casualty of this redesign — and, to be honest, it has been on the cards for a while — is the loss of the optical drive, as there really is nowhere to put it. If you still need to play or burn CDs or DVDs, you will need to obtain an external optical drive. It is perhaps a sign of the age of this venerable technology that this need not be an expensive purchase, in some cases costing less than Apple charge for a Thunderbolt cable!

On the plus side, this new rendition of the iMac sports a gigabit Ethernet socket, two Thunderbolt sockets, four USB 3 sockets, an SDXC card slot and a headphone jack. The inclusion of a second Thunderbolt socket (on all models) will be very useful for those using devices without Thunderbolt pass-through, which will include legacy Firewire devices connected using adaptor cables. The inclusion of USB 3 (backwards compatible with USB 2) is, of course, only to be expected, and should be seen as significant by data-hungry musicians who won't be using Thunderbolt peripherals. The potential of USB 3 for up to 5Gbps of throughput makes it over six times as fast as the Firewire 800 protocol, and half the speed of Thunderbolt. 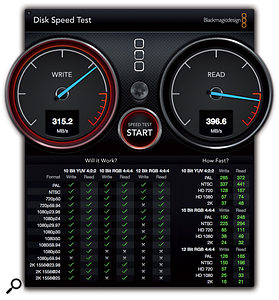 The 21.5-inch models are supplied with 8 or 16 GB of RAM, but this choice can only be made at the point of purchase, as the memory is not user-accessible in this model. However, the 27-inch version does have user-accessible memory and, although it's supplied with 8 or 16 GB, can be updated to 16 or 32 GB at a later date by the user, if required. Maybe the most significant change to the hardware, though, is in the storage department. Although in unmodified base configurations the 21.5-inch models are supplied with a regular 5400rpm rotational disk and the 27 inchers get 7200rpm, all models except the bottom of the range 21.5-inch version can be configured with Apple's new Fusion drive. This is a clever spin (cough!) by Apple on what is essentially a combination of two storage devices, the first being an additional solid-state device consisting of 128GB of flash storage, the second being the regular rotational disk as supplied in the unmodified version. Where this system differs from other hybrid drives, however, is that the SSD part of the storage system is large enough to contain the entire operating system, applications and support files, plus a good deal of your own data. The rotating disc part of the storage only comes into play when you exceed the capacity of the SSD. This therefore performs much faster than hybrid drives whose flash memory can only act as a cache, and therefore results in blisteringly fast load times, combined with a highly responsive system.

The model I was supplied to review had a 21.5-inch screen with 3.1GHz i7 processor, 16GB RAM and a 1TB Fusion drive, and to be honest, having worked with it for a day, I wouldn't want it any other way! Having grown very used to the responsiveness and 'instant-on' of iOS devices, it was beginning to grate a little that my most recent Mac purchase, an i7 equipped mid-2012 MacBook Pro, felt sluggish by comparison in general use, but this iMac just flies!

To quantify this, I ran some comparative tests using Black Magic Design's Disk Speed Test and Primate Labs' GeekBench. The latter performs a series of tests designed to give a score to a combination of processor and memory performance. While my MacBook Pro scored 11986, the iMac scored 12590. Unsurprisingly, these are pretty close, as the two machines have almost identical specifications, the iMac having a 0.5GHz advantage in processor speed and 2MB extra L3 cache.

This was not the case with the disk speed test, however! The MacBook Pro's 5400rpm rotational disk put up speeds of around 59MB/s (write) and 72MB/s (read), which is respectable for a portable hard drive. However, the iMac's Fusion drive clocked 315MB/s (write) and 397MB/s (read). No contest!

In practical terms, what does this feel like to the user? Try comparing the following test results with your own system to see what I mean:

Now if that doesn't put a smile on your face, you haven't been working with computers for the last 10 years! This will save you some considerable time over the working life of the iMac, and may cut down your tea intake as a side-effect!

In practice, however, the serious recording musician will need to think carefully about how data is allocated in a Fusion-drive equipped iMac-based studio. Installing Logic Pro and Native Instruments Komplete would overwhelm the SSD part of the Fusion drive, meaning that further audio recording and playback would take place at regular rotational disk performance levels. In this case, sound libraries should be kept on external storage so that the full performance benefit of the Fusion drive would be exploited. Alternatively, recording and playback of audio should be confined to external storage, if sample and instrument loading is a priority.

There are reports that the cutting‑edge construction methods employed in manufacturing the new iMac are so difficult to implement at the scale required by a desktop computer (as opposed to a smartphone) that they have resulted in a supply chain that is not as healthy as Apple would like it to be. But don't let that deter you from buying one. This iMac looks fantastic, using it is a much improved experience, and it goes like smoke when fitted with the Fusion drive option.

A welcome update to the iMac design and a healthy boost in performance make this the ideal desktop computer for musicians.