ART produce an impressive number of inexpensive problem-solving boxes, one of which is the Dual RDB reviewed here. This is a passive interfacing device based around a pair of audio transformers, and is intended to convert mono or stereo line- or instrument-level sources to balanced XLR microphone- or instrument-level jack outputs. In more practical terms, this means it can be used as a re-amping tool, as well as for its more conventionally DI-related functions. Either quarter-inch jack (balanced or unbalanced) or XLR line-level inputs are accepted, and both jack and XLR output connections are also present. The body is of metal construction (an alloy extrusion with steel end-plates), with rubber feet and a separate ground terminal for use in systems that don't already have a suitable ground. 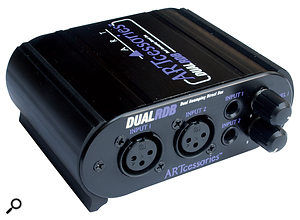 ART quote the frequency response as 20Hz to 20kHz (±0.5dB at +4dBu), and a maximum signal level of +18dB can be accommodated with acceptably low transformer-saturation distortion. No figure is given for the instrument output impedance, but as a typical electric guitar might have an output anywhere from 3 kΩ to 20 kΩ, depending on the pickup type and the pickup switching system, having an exact value isn't all that critical anyway.

A variable level control for each channel permits adjustment of the input level, and the output sockets for channel two have two associated buttons, labelled 'Source' and 'Phase'. The first allows the channel to be fed by either the channel one or the channel two input (enabling the unit to function as a splitter), while Phase inverts the polarity of the signal on channel two.

For re-amping a recorded guitar part, the output from the audio interface or mixer would normally be fed to one of the XLR balanced line inputs of the box, and the instrument-level signal from the output jack would be fed into an instrument amplifier, which would then be miked up and re-recorded. The variable level control should be adjusted so that the signal hitting the amplifier is nominally the same as from a guitar plugged directly into it. Other applications include use as a passive stereo DI box, or the connection of consumer audio and video players, almost all of which employ unbalanced connections, to pro audio devices.

As a simple DI unit, the Dual RDB works well — and it's not too shoddy as a re-amping box, either! I compared the tonality of my guitar plugged directly into my amp against the re-amped signal from my DAW fed to the same amp via the ART Dual RDB, and as long as I took the trouble to match the signal levels, using the level knobs on the box, the results sounded really close. More exotic re-amping boxes might get even nearer to the actual sound of the guitar plugged directly into the amp, but I'd say that any such differences that do exist are only of around the same magnitude as those that result from choosing a different guitar cable. Importantly, the end result was also free from any noticeable noise or hum. Given that this is a a very affordable little gadget, I think it would make a useful addition to just about any studio. Paul White