A rotatable capsule design means that making stereo recordings with the CK40 could hardly be easier — but how does it sound? 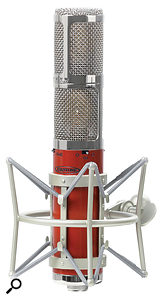 Avantone say the CK40 is suitable for vocals, piano and general room miking. Its two capsules are stacked vertically and as closely as possible to each other, for near-coincident operation, and the upper capsule housing can swivel through 90 degrees to achieve the desired mutual angle between the capsules. A scale engraved on the top half of the capsule housing shows the angle between it and the bottom capsule.

One neat feature of the CK40 is that each capsule can be independently set to one of three pickup patterns (cardioid, omnidirectional or figure-of-eight), allowing for all the common coincident stereo miking techniques to be explored, from X/Y to Mid/Side. This swivel approach is fairly common for large-diaphragm stereo microphones, as well as classic stereo ribbons like the Bang & Olufsen BM5 (and derivatives), and has been proven perfectly workable in a practical situation, so you're not buying into some untested concept.

Alongside the three-way pattern selectors are switches that engage a -10dB pad or 80Hz (6dB/octave) high-pass filter. Again, these are independent for each capsule, though the functions share a single three-way switch, so you can't have a low-cut filter and a pad on the same capsule at the same time. The front switches control the lower capsule, while the rear switches control the upper rotating section.

Standard 48V phantom power is required, and the mic comes with a five-pin XLR cable that feeds the included splitter box, so that a pair of standard three-pin XLRs can be used to connect it to two preamps. Also included in the package, which comes in a large aluminium case, is a rugged shockmount, a mains cable for the splitter box, and one very long foam wind-shield. The mic itself is further protected by a lined wooden box.

Turning to specifications, the documentation shows a 20Hz-20kHz frequency response (±3dB), a maximum SPL handling of 147dB, and an equivalent input noise figure of 17dB (A-weighted), which is typical for a microphone of this type. This yields a signal-to-noise ratio of 77dB ref one Pascal. The mics's sensitivity is rated at -40dB, its weight is 0.95 kgs. and its overall size is 276 x 49mm. 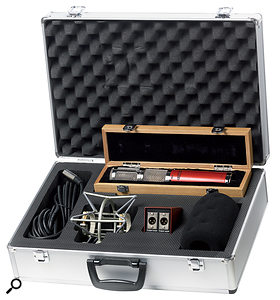 The CK40 ships in an aluminium case, with a wind shield, a splitter box, a shockmount and a five-pin XLR cable. The mic itself is further protected in a felt-lined wooden box.

The CK40 is a very capable all-rounder, whether used as a mono mic or in a stereo configuration. Its tonality is well-balanced, with clear but non-aggressive highs, and it seems a good fit for vocalists who don't have special microphone requirements because of excessive harshness or dullness in their vocal tone. Acoustic guitar fares well, and even an electric guitar cabinet miked up close gives usable results, although from preference I'd usually opt for something a bit more soft and cuddly in that particular application, to tame some of those hard highs. The shockmount also holds the mic firmly, although to really tighten up the clamps you need a screwdriver, as the fastenings are a little small to grip with the fingers.

In X/Y stereo mode, the CK40's soundscape opens up in a very believable way, making this mic well suited for ensemble recording, drum overhead applications, choral work, and as a main front mic in a situation where you need to combine overall stereo miking with individual instrument spot mics.

Although there's a nice sense of clarity and space in X/Y configuration, my preference is for Mid/Side recording, which this mic also handles very easily with the side-facing capsule set to figure-of-eight and the forward-facing 'mid' capsule to whichever of the three patterns best suits the situation. This involves some simple sum and difference decoding prior to mixing, but is worth the small effort involved, both because of the control it affords over adjusting the stereo width and the absolute mono compatibility of the end result.

Given its modest cost, the CK40 offers good value and a solid level of performance. It isn't in any way esoteric, and its noise figures are pretty average rather than especially low, but it delivers on an artistic level and can turn its hand (or its heads) to many different applications.

Similar microphones include the Cascade L2 and the Studio Projects LSD2.

Visit /sos/mar13/articles/avantone-ck40-media.htm to hear what the CK40 sounds like in action! We tried it in mono on vocals, as well as both acoustic and electric guitar in a stereo X/Y configuration.

The CK40 is an affordable and solid performer in a number of applications, from solo vocals and acoustic guitars through to ensembles. It isn't particularly exotic but does a workmanlike job with style.