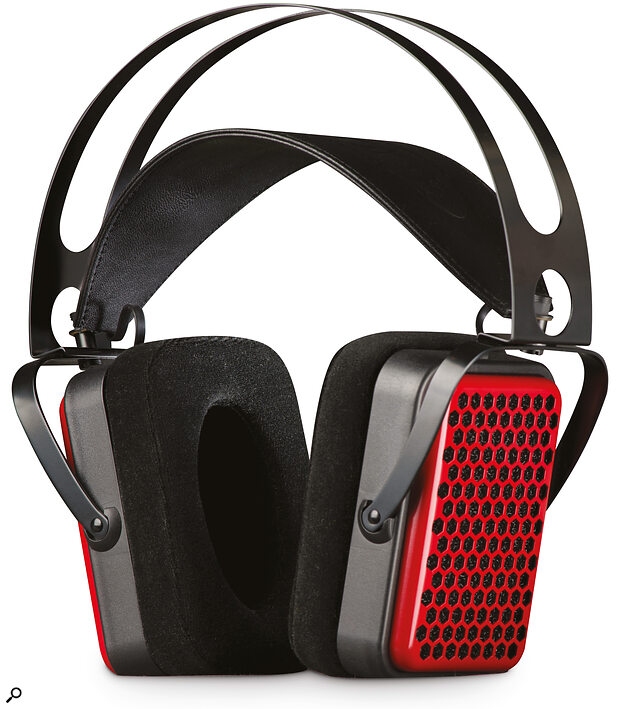 If you crave the refined sound of large planar magnetic cans but are put off by the price, Avantone’s newest headphones could well be the answer.

The headphone market shows no sign of ceasing to boom. It’s still dominated by traditional moving‑coil designs, but alternative technologies are gaining traction too. Already this year I’ve been very impressed by HEDD Audio’s HEDDphones, the first headphones to use an Air Motion Transformer as a driver. Elsewhere, breakthroughs in magnet technology have brought about renewed interest in planar magnetic headphones, thanks mainly to the efforts of Dr Drag Colich at Audeze. For a full explanation of how a planar magnetic driver works, go to www.soundonsound.com/reviews/audeze-lcd-x-el8 where you’ll find our detailed review of Audeze’s flagship LCD‑X.

The latest manufacturers to embrace this technology are Avantone, US‑based makers of mics, loudspeakers and other studio equipment. One of the more interesting products in their existing catalogue are the MP1 ‘MixPhones’; these are closed‑back phones that use conventional moving‑coil dynamic drivers, but they incorporate a mono switch and a voicing option that cuts out the extreme high and low frequencies so you can pretend you’re mixing on an Auratone. The Mixphones have now been joined in Avantone’s line‑up by a second pair of headphones which, as the name suggests, use planar magnetic drivers rather than moving‑coil transducers. Like most planar designs, the Planars are open‑backed headphones designed primarily for mixing and hi‑fi listening.

Available in red or black, the Planars are shipped in an imposing cardboard box. The included “eco‑friendly carrying bag with cable pouch” proves to be a simple canvas bag that offers relatively little protection, and is no substitute for a rigid case. On the plus side, though, you get two cables, both screened with an attractive and robust braid. The shorter of the two has a mini‑jack at either end and can be plugged into either of the two earcups; the longer is a Y‑cable that attaches to both earcups, and always delivers the correct channel to each side regardless of which way around you connect it.

Planar magnetic phones are usually on the large side, and none more so than the Planars. The rectangular earcups are about 11 x 7 cm in diameter and fully 5cm deep with their removable earpads, while the total mass of the headphones is almost half a kilo. Despite this, they are perfectly comfortable for extended use. The metal band that bridges the two earcups is augmented by a soft, broad headband, and it’s this that rests on top of your head, spreading the load. The earcups are hinged and rotate freely in two axes; however, there’s no way to adjust their height relative to the headband, and they sat a touch lower on my ears than I’d have wanted.

Historically, one of the drawbacks of planar magnetic headphones has been low sensitivity. Thanks to the use of rare earth magnets and improvements in fluxor design, that’s no longer an issue, and the Planars offer a more‑than‑respectable sensitivity of 104dB/mW. They present a nominal impedance of 32Ω, and like most planar designs, claim a very low distortion figure, with THD measuring less than 0.1 percent at 100dB.

They produce a clear, natural, open sound that, like all good monitor systems, makes you feel you’re listening to the music rather than the headphones.

From a sonic point of view, planar designs also have historic strengths and weaknesses. They can put across low frequencies in a way that most moving‑coil phones struggle to match, and the presentation of musical dynamics in a good pair of planar phones is hard to beat; but achieving a high‑frequency response that’s flat to 20kHz is a challenge. Avantone boast a frequency response of 30Hz to 30kHz for the Planars, but in the absence of any tolerance, this isn’t really a meaningful claim.

When I reviewed Avantone’s MixPhones, back in 2016, they seemed unusually sensitive to differences between headphone amps and, in particular, could not reproduce low bass properly when driven from a low‑power source. In theory, planar magnetic headphones ought to be easy for any amp to drive, but in practice I experienced much the same effect with the Planars. Connected to the built‑in headphone amp on a laptop or phone, they sounded brash in the upper midrange, whilst missing an octave or two in the low frequencies. Even the headphone amp on a cheap mains‑powered audio interface didn’t do them justice, and it was only when I plumbed them into my DACS Headlite that I heard what they are really capable of.

What they are capable of, it turns out, is quite impressive, and although there is a sonic differential between the Planars and flagship Audeze models, it’s a lot narrower than the difference in their respective costs. The same basic strengths are certainly apparent: they produce a clear, natural, open sound that, like all good monitor systems, makes you feel you’re listening to the music rather than the headphones. In a direct comparison with Audeze’s LCD‑MX4s, the stereo image on the Planars perhaps even felt a touch wider, and although they don’t present drums with quite the same thrilling punch as the LCDs, they still outperform most moving‑coil headphones in this regard.

When connected to an amp with serious welly, the Planars have plenty of bass extension, but there is still a tendency for the very low frequencies to be overshadowed by a hump somewhere in the 100Hz region. They are also a touch less smooth in the upper midrange than really state‑of‑the‑art models like the LCDs, occasionally coming across as slightly gritty. But they are as close to subjectively ‘flat’ as most headphones in their own price range, and for myself, I find a midrange emphasis much more useful for mixing than the ‘scooped’ tonality beloved of many headphone designers.

Price‑wise, in fact, the Planars go head to head with Audeze’s more affordable LCD‑1 model, but there’s actually less similarity there in terms of sound or physical design. The Planars are bulky and heavy, with a classic planar sound that foregrounds the upper bass and the midrange; the LCD‑1s are lightweight, small and portable, and their tonality is quite a bit more crisp. In fact, the LCD‑1s sound a lot more like standard moving‑coil headphones in comparison, and I personally preferred the relaxed, open feel of the Planars. I strongly suspect this is down to a key feature that they have in common with the larger LCDs and the HEDDphones: earcups that are not only large, but also very deep. This positions the driver further away from the ear and, in my experience, delivers a more speaker‑like experience. Until now, I’ve only encountered this style of earcup design on models costing north of $£1000, so it’s fantastic to see it brought to market at a much lower price.

In these days when headphone mixing is becoming ever more important, many of us aspire to own high‑end planar magnetic phones, but haven’t been able to justify the cost. Whilst the Avantone Planars are still a significant investment, they offer a much more affordable way to experience ‘that sound’ — and if you try them, you’ll understand why so many mixing engineers think so highly of planar magnetic headphones.

The Planars offer many of the strengths of high‑end planar magnetic headphones, at a very competitive price.