Think of the KeyStep 37 as a MkII deluxe version of the classic KeyStep. (The original 32‑key model is still around, providing a lower‑priced, more backpackable option.) Like its smaller sibling, the 37 is a MIDI keyboard with an arpeggiator and step sequencer. Added to the mix are an extra five keys, MIDI CC controls and advanced chord and scale functions.

Most of the multitude of compact MIDI keyboards on the market focus on controlling DAWs and apps. They typically provide a mix of controls for software mapping, and sometimes add some smart integration with particular software. Nearly all are USB‑only. The KeySteps take a unique approach that’s more about playing and generating musical ideas. The KeyStep Pro is a central sequencing hub for a hybrid setup, while the 32 and 37 are ideal as companions to synths or other sequencing environments.

The KeyStep 37 looks like a slightly elongated version of the KeyStep, because it is. On the rear panel, the connectivity is the same except that the USB connection has been upgraded to a full‑sized port, and there’s now a power switch. As well as USB there’s regular 5‑pin DIN MIDI In and Out, a modular voice set of Pitch, Gate and Mod, analogue clock in and out, and a sustain pedal input. The 37 retains the pair of dip‑switches for clock settings, making a refreshing change from menu‑diving.

Up top, the extended keyboard now has key lights, and there’s a new section with four knobs and a button. All the other controls carry over from the 32, including the Sequencer/Arp slider switch and eight‑way selector knobs which have a satisfyingly old‑school synth feel.

I spent much of the review with the KeyStep plugged directly into an MPC Live via USB. This was able to power the keyboard as well as host it as a class‑compliant MIDI device. If you want to run standalone but use the MIDI or CV outputs, you can juice the device from any regular portable charger or add the optional mains PSU. If you’re plugged into a computer, MIDI notes sent to the KeyStep 37 via USB goes to all outputs, so it can work like a single‑channel MIDI/CV interface.

Many controllers and synths feature arpeggiators, but the KeyStep 37’s is a little bit special. It goes further than the usual modes and controls you’d expect, with niceties like exclusive and inclusive up/down mode, variable gate length and swing.

Joining the modes from the original 32‑key model and KeyStep Pro is Pattern mode, which was an innovation on the MicroFreak synth. This creates a random note pattern that repeats instead of randomising each cycle, and has a specific length that you can set up to 64 notes. You can add more notes to alter the pattern, and change the length on the fly. It’s a really great way to generate semi‑random sequences within parameters you can control. The only thing you can’t do (which you can on the MicroFreak) is capture the result to a slot in the Sequencer.

The Arp and Sequencer both benefit from a new scale option, which contains notes to a chosen mode and key. Other than Chromatic, there are only three preset scales to choose from (Major, Minor and Blues), but you can very quickly define a User scale by holding the notes that you want to include.

The KeyStep 37 goes to places most MIDI controllers fear to step...

The original KeyStep 32 has a basic chords feature where you can capture a chord shape that you’re holding, then play it with single keys. The 37 can do this and a lot more besides, being able to auto‑generate chords of various types, choose the number of notes, and transpose in key within a selected scale. These chords can be combined with the Arpeggiator. 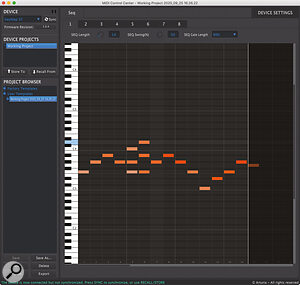 Advanced settings, back‑up and control assignments are available in the MIDI Control Center, and it even has a piano‑roll sequencer editor.But the most striking and addictive feature of the KeyStep 37 is the Strum function. I’ve used the strum option on Native Instruments’ Maschine controllers, where you manually strum a held chord via a touchstrip. The KeyStep 37’s strum works differently: it plays chords as a sequence of notes in ascending or descending order, like strumming a guitar chord. The right‑most of the new knobs sets the speed and direction. At the far end of the knob’s range are sync’ed strum speeds, providing an alternative take on arpeggiation.

An added expressive feature is being able to tie the number of notes in the chord to velocity. Play softly for smaller chords, and strike the keys for up to 16 notes.

The KeyStep is probably best known for its classic step‑sequencing functionality. The KeyStep 37’s sequencer is fundamentally the same as on the classic 32, but it is elevated by the new scales and chord features.

The sequencer primarily uses step‑entry mode, although there is a live record/replace mode which quantises to the nearest step. In the classic SH‑101 style, you enter note and rests with the transport stopped, and the sequence length is simply determined by the number of entries. At any time, however, you can adjust to a specific loop length. Eight sequence memory slots are available from the first dial.

What makes the KeyStep quite magical is interacting with sequences in real time. You can transpose the sequence with the keyboard and flip between scales. You can overdub or replace notes in real time within the current loop, or use the Append mode to keep adding extra notes to the end of the sequence. This last is particularly fun, throwing off your loop length in unpredictable, polymetric ways. The enhanced chords functions, including Strum, can also be triggered by the current sequence.

The KeyStep 37 goes to places most MIDI controllers fear to step, with full standalone capability and both MIDI and CV connectivity as well as the usual USB. But more than that it’s an inspiring musical companion and idea generator for any synth, sequencing workstation or DAW.

When not controlling chords, the four new knobs on the KeyStep 37’s panel generate MIDI CCs, and the Chord button serves a secondary duty of cycling through four control banks. The assignments can be edited directly on the unit, but you have more straightforward and detailed control of this from Arturia’s standard MIDI Control Center software.

The knobs can have independent MIDI channels or follow the User channel, and you can set ranges. There’s even a knob‑scaling option to avoid jumps when changing banks. For CV Mod control you can choose the Mod touchstrip, velocity, or aftertouch as your source.

The MCC app also reveals some advanced features that really impressed me. For example, you can set a port and channel for transposing the sequencer from an external source. And you can choose whether sequence changes are queued, instant and reset, or instant from the same step position. Arturia are always strong on details like this.

A great step up from the original KeyStep, with absorbingly fun sequencing and performance features.