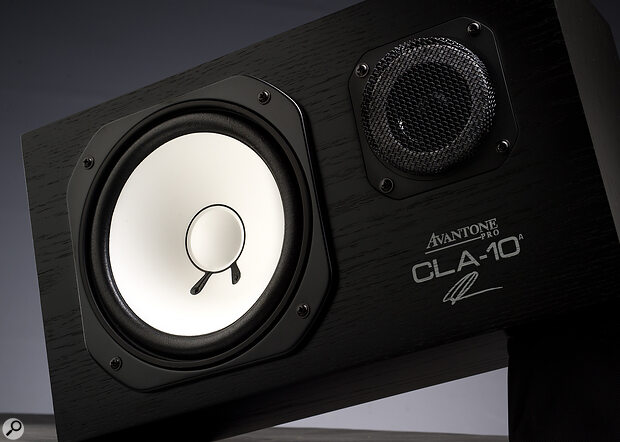 Avantone’s take on the classic NS‑10 is now available in powered form. We fire them up...

Back in December 2018 I wrote extensively about the Chris Lord‑Alge‑endorsed Avantone Pro CLA‑10, a reboot of the Yamaha NS‑10 monitor. At the time I wondered how long it would be before the arrival of an active version, and now I know. It’s here. Actually, as I write, the CLA‑10A (‘A’ for active’) has been around for perhaps nine months, but it’s only more recently that we’ve been able to get hold of a review pair. They’re perched either side of my workstation as I type.

Back in my review of the passive CLA‑10 I described some of the issues inherent in manufacturing a contemporary take on the NS‑10. I’m not going to repeat all that here, but you can read it at www.soundonsound.com/reviews/avantone-cla-10. There’s also my September 2008 piece on the history of the NS‑10 itself, which tells the story and examines the electro‑acoustic whys and hows of the monitor. You’ll find that at www.soundonsound.com/reviews/yamaha-ns10-story.

Back to the CLA‑10A. There’s not a lot to write about its physical appearance: it looks unmistakably like both an NS‑10 and a CLA‑10, with only the jointless white cone distinguishing it from the former, and a small ‘A’ in the logo distinguishing it from the latter. Speaking of the logo, I found it slightly disappointing that its screen‑printing process doesn’t really work with the texture of the black painted veneer surface. The print quality of the logo is somewhat patchy.

Around the back, the difference between it and the passive version becomes apparent, with the usual active monitor heatsink, input and control panel. In this case the connections amount to just balanced combi XLR and unbalanced phono inputs, and the controls comprise a ground‑lift switch, a stepped input sensitivity knob and a further stepped knob intriguingly labelled ‘VTPC’. I’ll get to what the Dickens ‘VTPC’ is in a moment, but first there’s a little to say about the nature of the CLA‑10A internal amplification. 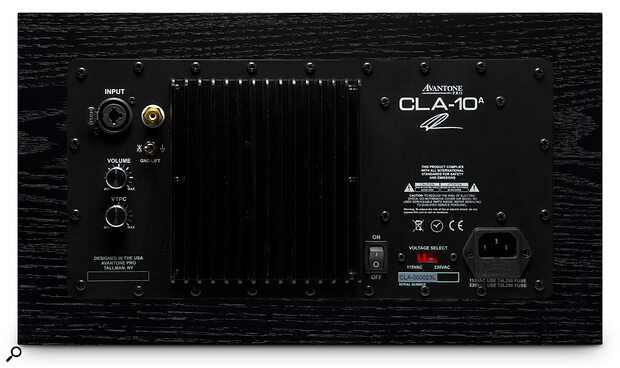 The rear panel houses the balanced and unbalanced line inputs, a volume knob, ground‑lift switch, and the VTPC control.

We’ve come to expect in the world of active monitors that each driver, most often in nearfield monitors, a bass/mid unit and a tweeter, is connected to a dedicated power amplifier channel with the necessary low‑pass and high‑pass crossover functions managed by upstream filters operating at line level. Not so with the CLA‑10A. It’s an active monitor in that it incorporates power amplification, but it has just one amplifier channel (a Class‑A/B design rated at a very healthy 200 Watts), the output of which is connected to both drivers via a conventional passive crossover network.

Now you might think initially that the use of just one power amplifier channel with a passive crossover is a bit of a cheat. But actually, in the context of creating an active CLA‑10A that sounds subjectively close to its passive sibling (and, by extension, to a passive NS‑10), going the ‘full‑fat’ active route with twin power amplifiers and line‑level filters may have been problematic. That’s because, in a variety of technical respects, full‑fat active speakers behave fundamentally differently to passive speakers, and those differences express themselves subjectively, so a full‑fat active CLA‑10A would probably never have sounded quite right. Furthermore, it’s quite possible that Avantone’s decision to go with a passive crossover was a more expensive option than full‑fat active. The high‑value capacitors and inductors required in a passive crossover are not inexpensive, so the componentry required for active filtering and a second power‑amp channel could potentially have cost less.

The CLA‑10A is an extremely revealing and useful mix tool...

The time has now come to describe that back‑panel control. VTPC stands for Variable Tissue Paper Control, and if you’re still none the wiser, it refers to the old story that mix engineer Bob Clearmountain, when first using Yamaha NS‑10s, would place tissue paper over the tweeters in order to tame their bright tonal balance. I’ve never really understood why he couldn’t have simply used a shelf EQ in the monitor chain, and that’s effectively what VTPC amounts to.

As to quantifying what the VTPC control actually does, I fired up Sonarworks and made some measurements. I measured the CLA‑10A’s frequency response with the VTPC at maximum, minimum and what I established as my subjectively preferred setting (Diagram 1). I guess the startling thing about the VTPC control is its inordinately wide range. I can’t really imagine anybody wanting HF EQ adjustment that offered more than a window of, say, 6dB. VTPC offers around 15dB at 10kHz!

Diagram 1: The effect of the VTPC control on the CLA-10A’s HF response.

Next, I raided my dusty FuzzMeasure archive to find the frequency response measurements I made of the Yamaha NS‑10M Studio and passive CLA‑10, and overlaid a CLA‑10A measurement on top with the VTPC control set at my preferred level (Diagram 2). There’s two interesting things to report. Firstly, the CLA‑10A’s frequency response shape is characteristically very similar to the original CLA‑10 (and, as I discovered before, noticeably more prominent between 3kHz and 8kHz than the NS‑10), and secondly, my preferred high‑frequency balance is much less bright than the passive CLA‑10 (which, when I reviewed it, was extremely bright), and not far off the original NS‑10M Studio.

Diagram 2: Here, I’ve overlaid my previous measurements of the passive CLA-10 and Yamaha NS10 Studio with a measurement of the CLA-10A with its VTPC set to my preferred level.

Having revealed no surprises in the description of the CLA‑10A, other perhaps than it not being bi‑amp active, I’m not about to reveal any surprises in its subjective performance either. I didn’t have a pair of NS‑10s or, for that matter, CLA‑10s, around during the review period, however both those monitors have such a characteristically recognisable sonic signature it didn’t take me long to decide that the CLA‑10A falls into the same territory. It has, to my ears, all the NS‑10 trademarks of quick and tuneful but bandwidth‑limited bass, strongly emphasised and revealing upper midrange, and slightly unrefined yet very usable high frequencies. It’s sometimes not the most relaxing or engaging listen, and its ‘pushy’ 3‑8 kHz balance occasionally leaves things sounding a little thin, but the CLA‑10A is an extremely revealing and useful mix tool, which I guess is the whole point. The amplifier was a little on the noisy side, but the good news is that, along with attenuating the HF level, the VTPC control also turns down the amplifier hiss, and as my preferred HF balance was relatively dull, the hiss was acceptable.

The obvious alternative to the CLA‑10A is a pair of CLA‑10s with a power amp, and Avantone actually supply such an option at around 10 percent more than the price of a CLA‑10A. Alternatively, a little less spent on a power amplifier could mean a passive CLA‑10 system for less than a CLA‑10A. If you’re willing to be patient and buy carefully, you could of course shop around for a used pair of Yamaha NS‑10s and a power amp.

If any monitor does what it says on the tin, it’s probably the CLA‑10A. To all intents and purposes it’s an active NS‑10, and if that’s something you’ve always hankered after, hanker no more.