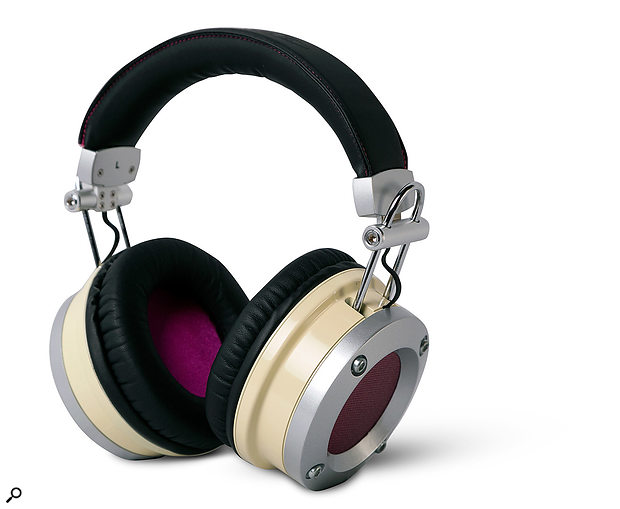 For their first-ever headphone design, Avantone have seen fit to include some unusual — and useful — extra features.

Many headphones designed for studio use have something of the ’smile curve’ about their frequency response: goings-on above 5kHz and below 100Hz are exaggerated, respectively inviting praise for ‘revealing, detailed’ high end and ‘solid’ bass. ‘Phones with this sort of response can indeed be very pleasant to listen to, and useful for showing up noise issues, dodgy edits and so forth. But the flip-side of a smile curve is that it recesses the mid-range, and if you’re attempting to mix on headphones, this doesn’t suit everyone.

The mid-range balance is crucial to any mix, and many engineers find this easiest to get right on small speakers that focus on this area of the frequency spectrum, the classic examples being the Yamaha NS10 and the Auratone Super Sound Cube. Until now, headphone equivalents to these speakers have been rather thin on the ground — but perhaps this situation is now changing. As we saw in October’s SOS, Yamaha’s new HPH-MT7 ‘phones were designed with the NS10 ‘family sound’ in mind; and now Avantone have produced a set of phones that, indirectly, reference the Auratone.

Though they also make a varied range of well-regarded microphones, Avantone are perhaps best known for their MixCubes: small, square, single-driver, sealed-box loudspeakers that are very much inspired by the iconic Auratone. Although the MixCubes improve on the original Auratone design in some ways, offering a cleaner and more hi-fi listening experience, they nevertheless inherit that speaker’s mid-range emphasis and transient response, along with other advantages such as the absence of port resonances and crossover artifacts.

So, for Avantone’s first pair of headphones, what better way to find a niche in a crowded market than by bringing the MixCube sound to this environment too? That’s what the company claim to have done with their MP1 MixPhones. As the name suggests, these are targeted primarily at mixing applications, and are described by Avantone as being the first headphones to offer ‘Vari-Voice’ technology.

This term refers to a small, recessed toggle switch at the base of the right earcup, which can be used to select between three modes of operation. In its central ’S’ position, the MP1s deliver a full-range, stereo signal. The ‘M’ position sums the left and right channels to produce a mono fold-down, which is delivered to both ears, while the ‘C’ position introduces filtering that is intended to emulate the characteristic mid-heavy frequency response of the MixCube.

Like many headphones these days, the MP1s ship in a lavish, oversized box, of the sort you’d expect to contain an expensive dinner service. In this case, however, the ‘phones themselves are also plus-sized, with earcups that are almost 11cm in diameter and a full 6cm deep. Upon this large canvas, the designers have worked in prominent elements of cream, black, brushed metal and DayGlo pink, to arresting effect. If it was Avantone’s aim to create something unmistakeable that will stand out in even the blurriest YouTube video, they’ve certainly achieved that. If it was their aim to make the MP1s look like novelty muffin moulds from a steampunk kitchen catalogue, well, they’ve achieved that too. I think they look ridiculous, but your mileage no doubt varies.

The MP1s seem very solidly made and, as you’d expect from their size, are a fair bit heavier than most headphones. However, I actually found them reasonably comfortable to wear, despite the fact that the earcups rotate only a short way about the horizontal axis and hardly at all fore and aft, and I would have no problem using them for long periods (as long as no-one was looking). In the cable department, there’s a choice of short and curly or long and straight wires, which attach to the base of the left earcup using a mini-jack with a locking nut. A soft leatherette carrying bag is also supplied, but unfortunately the MP1s cannot be folded or collapsed in any useful way, making them one of the least portable pairs of headphones I’ve ever encountered.

The impedance of the MP1s is quoted as 16Ω, and according to the specs, a 1mW input at 1kHz produces a stonking 113dB SPL. They are, in other words, loud. And, as is often the case with low-impedance headphones, they are a little sensitive to the vagaries of different headphone amps.

I tried them first of all on the built-in output of my MacBook Air. Low bass was not much in evidence, but the overall tonality was otherwise pretty well balanced, with a broad mid-range focus and perhaps the faintest hint of a bloat in the upper bass. Switching to the ‘C’ position removed the bloat but otherwise made a much less drastic change than I expected. It had no effect at all that I could hear on the treble or upper mid-range, and at the bottom end, the difference was often all but unnoticeable on sources that weren’t bass-heavy.

With an amp that can keep up, by contrast, the bottom end becomes much fuller, to the point where some might find it a bit over-prominent. The difference that flipping to the ‘C’ position makes is also more obvious, so that you really do get something of the impression of switching to a pair of small secondary monitors. Compared with the HPH-MT7s, they offer a slightly different flavour of mid-range focus that is smoother and warmer, with less of a peak in the 3kHz area and more prominence given to the 600Hz region. And, although I initially had reservations about the slightly ‘Beats By Dre’ bottom end, I actually found that I quickly got used to it and that my attempts to mix on the MP1s translated pretty well to other systems. And we shouldn’t forget that third switch position, either: many project-studio interfaces and monitor controllers either don’t have a mono button or don’t relate it to the headphone output, so this is a definite boon.

Although they’re called MixPhones, of course, there’s nothing to stop you using the MP1s for other roles in the studio. Their sheer bulk means they have pretty good isolation from external sounds, and their high sensitivity means you’ll never have trouble giving the drummer enough vocals in his cue mix. Avantone are to be commended for introducing some fresh thinking to the world of studio headphones, and if you can live with their rather polarising visual design, the MP1s are definitely worth a try, especially if you need to mix as well as track on headphones.

Avantone’s first foray into the headphone market is definitely not a me-too product! With their distinctive looks and weighty sound, the MP1 MixPhones are genuinely useful for mixing, even if they won’t appeal to everyone.