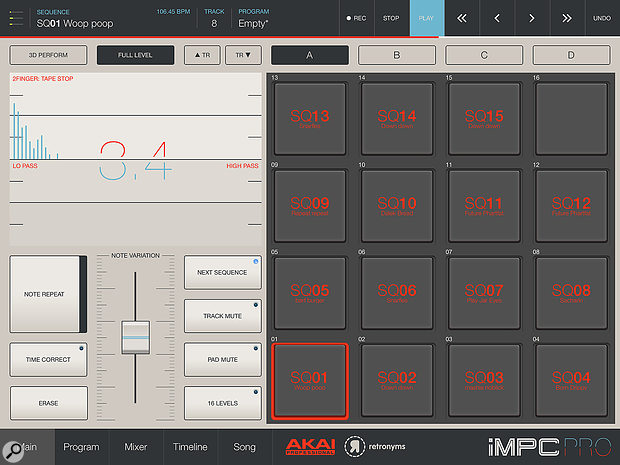 The main iMPC Pro screen with its array of performance tools.

In 2013 Akai’s legendary MPC workflow reached the iOS platform in the form of iMPC. Two years later, its adopters could be slightly miffed to learn there’s a brand-new ‘Pro’ version — an entirely separate app. Properly tooled-up and loaded with more of everything, iMPC Pro offers 64 tracks, a built-in piano roll editor, superior effects implementation and a choice of friendly sample-fixing tools.

The app is divided into five pages: Main, Program, Mixer, Timeline and Song, and from the outset behaves as much like a traditional MPC as an iPad’s screen and operating system permits. Given that iOS is a general-purpose operating system and that tapping your finger on glass will never trump the experience of hardware, my iPad Air responded fairly consistently to iMPC Pro, and better than some apps.

Each program consists of four pad banks, which equates to a maximum of 64 sounds. Akai’s ambition is clear when you realise there are up to 64 tracks to call upon, one program on each. Keeping with the 64 theme, this is the number of sequences that you can create and either arrange into a song structure or play them manually as the mood takes you. A newly selected sequence will play on completion of the current — there’s no option to switch immediately as on other MPCs. If you work in songs, these can be exported as WAV files to iTunes, Soundcloud or the Audiocopy clipboard.

Many favourite MPC features made the transition and amongst these are the universally handy ‘note repeat’, plus ‘16 Levels’. Engage the latter and the pads switch between 16 different levels for the current voice, a quick and controllable way to add dynamics. Joining these are several iPad-specific features, such as the ‘3D Perform’ button, which enables a number of performance effects to be controlled by the iPad’s motion detectors. I can’t decide if it’s novelty value or genuinely useful to tilt-sweep the pitch or filter, but if you’re prone to seasickness a regular Kaoss-style pad introduces effects such as tape-stop or glitching. Thanks to these few simple finger gestures a bunch of performance tricks are at your disposal and if you hit on something good, hit record and capture the actions into a sequence for posterity along with your pad hits.

In performance, you’ll be glad of Pad Mute to silence individual pads within a program. A muted pad is indicated by a (very) thin red diagonal line, which doesn’t show up well against the grey background. At least that’s my excuse for puzzling for ages over a mysterious inaudible sample. The Track Mute button performs the same trick for entire tracks. 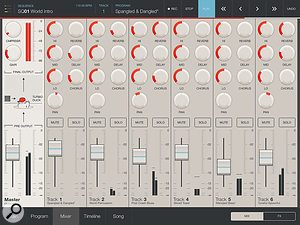 iMPC Pro’s mixer, complete with ‘Turbo Duck’.Delivered with over 1400 individual sounds (just under 700MB) and 25 factory programs, iMPC Pro is a large and well-equipped app. This being iOS, it draws from its own private pool of samples and is blind even to those shipped with the original app. The quality is excellent throughout and if the emphasis is on percussion, that’s hardly a bad thing. I was initially blown away by the reverb in the demo tunes, until I realised this wasn’t the product of a finely tuned iPad, but of serious production polish in the raw samples. If the long and magical reverb tails swell the library a bit, I’m not complaining and was more than happy with the supplied drums, ethnic percussion, synths, effects and so on. Individual pads within a program can be extensively customised so the samples should theoretically have a long shelf-life. Having tuned, panned and filtered each one, it can be processed by either an overdrive or ring modulation effect. Building a library of user programs from a combination of the factories and original samples is a job that will reap rewards later.

Sampling can be as fast as hitting record and yelling at the microphone, or as in-depth as ripping audio from your iTunes music collection using a virtual turntable. Puzzlingly, my music collection consisted of a U2 album, but this stubbornly refused to be sampled thanks to copy protection. Pasting audio from other apps worked smoothly, though, and very soon I was exploring the graphical sample editor and its pinch-and-expand method of zooming. Samples may be intuitively trimmed, amplified, reversed, faded, normalised and audiocopied, all to a surprising degree of precision. It’s certainly sufficient to make tracks.

Keeping with MPC tradition, a sample can be divided into up to 64 chunks and distributed across the four pad groups that make a program. However, I must report a bad experience in my first long session with iMPC Pro. It started well enough: I made a bunch of fairly elaborate programs on half a dozen tracks then grabbed a loop from another app and sliced it. Perhaps because iMPC Pro is so seductive, it never occurred to me to save anything, so when the crash came (I was fine-tuning some individual slices of my loop) it took all my sequences with it. Later, I discovered the ‘quick save’ option and, later still, that the various programs and sounds I’d made weren’t lost, only my sequences. Incidentally, the timeline note editor doesn’t need any explanation other than to mention it exists and to point out you can select a note or notes and perform a high degree of individual tweakage, if scultpting every note is your thing.

Moving quickly on, the mixer bears little resemblance to that of iMPC. Each track has a three-band EQ, effect sends and a master channel complete with a compressor and a duck. It’s no ordinary duck — this is a Turbo Duck wearing a red baseball cap. It’s probably the simplest implementation of pumping side-chain compression imaginable and works swimmingly. In addition to the reverb, delay and chorus sends, you can add an Inter-app effect, which appears on the mixer as a fourth send.

There’s not much to add except that tactile control is offered if you purchase the MPC Element hardware, a slimline unit blessed with the same type of coloured rubber pads as the recent MPX16. It can be ordered from within iMPC itself, but I didn’t have one to test for the review. Generally, other than the occasional crash, the only real issues were those of iOS in general, particularly the ease by which you get large samples in and out. At only £5$6 more than the earlier version, iMPC Pro is a much more complete product whether for live performance or for developing songs from loop-based material.