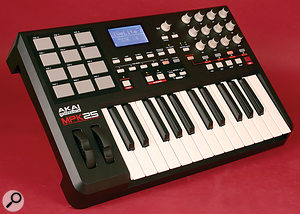 Our last encounter with Akai's MPK range of USB/MIDI controllers was back in the February 2008 issue of SOS, when we came face to face with the knob‑ and slider‑laden, 49‑key MPK49.

The MPK49 must have been a success for Akai, as it has since been joined by three new additions to the MPK family: the MPK88 (with a full‑sized, 88‑key, hammer‑action keyboard), the MPK61 (very similar to the MPK49, but with a 61‑key, semi‑weighted keyboard), and the MPK25 (reviewed here).

The MPK25 is essentially a smaller, cut‑down version of the MPK49. To say it's 'smaller', however, is a bit of an understatement. Comparing pictures of the two keyboards you don't really get a sense of just how compact the MPK25 is... It's small. It has full‑sized keys, like the MPK49, but half as many of them; the same percussion pads; and many of the same assignable controls, all of them squeezed into a case measuring 477 x 359 x 88mm. In terms of its 'footprint', the MPK is just over an inch deeper than my laptop and about four inches wider. If it were a tea‑tray, it would be large enough to eat your dinner off — but only just!

The MPK25 is supplied with a printed quick‑start manual, a PDF version of the same, and a more extensive PDF reference manual. The PDFs and bundled software packages (see the 'Software' box) arrive on two installation CDs. A standard USB cable is also provided, for connecting to a host computer. The MPK25 is a genuine 'plug and play' device: neither Windows nor Mac OS X requires a driver to be installed, and once plugged in, the keyboard will work almost immediately.

The MPK's rear panel is where we find all of its socketry. This includes (from left to right) an input for a 6V PSU (not included), USB port, MIDI I/O and sockets for sustain and expression pedals.

Along with its 25‑key, semi‑weighted keyboard, the MPK25 provides 12 MPC‑style drum pads, 12 assignable controller knobs, four assignable buttons, a data-entry knob and a set of five sequencer transport buttons (rewind, fast‑forward, stop, play and record). However, it lacks the assignable faders sported by the larger models in the MPK range — and although the MPK25 has four more physical knobs than the MPK49, only two 'banks' of assignments can be made (for a total of 24) while the MPK49 allows three (giving the same total).

On the back panel is a pair of standard MIDI ports (one in, one out) and a standard USB socket. The MPK25 is designed to be powered via USB, which assumes firstly that you'll be using it in conjunction with a computer (rather than, say, as a controller for hardware MIDI sound modules) and secondly that your computer's USB port will be capable of supplying sufficient current, which it probably will be. No mains adaptor is supplied, although there is a socket for connecting a third‑party adaptor (6V, 1A). There are also quarter‑inch jack sockets for connecting sustain and expression pedals (which aren't included).

The MPK25's keyboard is both velocity and aftertouch sensitive, but both sensitivities can be toggled on and off. Velocity sensitivity is linear in its response, and this is fixed (a choice of velocity 'curves' is not available). The 'semi‑weighted' keys feel solid and reliable, and are slightly springy, while octave Up and Down buttons can shift the keyboard's range up and down in two‑octave increments, over a 10‑octave range.

The MPK49 has a large, bright-blue, backlit display, which is clear and easy to read. Beneath it sit two rows of buttons. A knob to the right of the display allows you to change between 'presets', a preset being simply a record of all the current controller assignments. There are 30 preset slots available, all of which can have user presets saved to them. The first 16 come with useful pre‑programmed templates for software including Ableton Live Lite (included with the MPK), Reason, Cubase, Sonar and various other applications.

The 12 controller knobs are endless rotary encoders, whose two banks, as mentioned earlier, allow a total of 24 controller assignments. These can be used to send control-change or aftertouch data, and can also be set up to function as increment/decrement controls via NRPNs (Non-registered Parameter Numbers). The knobs are large and comfortable, and they feel sturdy and not at all crowded. Making and editing controller assignments is simple and straightforward, thanks, in part, to the MPK25's large display.

Beneath the knobs are the four freely assignable buttons, which illuminate when activated, and also double up as Time Division controls (more on which in a moment). As with the knobs, two banks are available. The Control Bank button works a bit like a Caps Lock key: one set of controller assignments is accessible when it is activated, the other when it is deactivated.

The MPK25 also has a Tap Tempo button, which can be used manually to set the unit's tempo, with an LED beside it that flashes to indicate the current setting. The keyboard can generate its own tempo internally or follow an external source, such as a sequencing application running on the host computer. 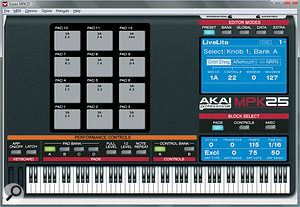 The heavy‑duty drum pads (borrowed from the Akai MPC5000) are positioned above the left‑hand end of the keyboard, in four rows of three. Drum pads of this kind are by no means unique to the MPK range, but Akai's implementation of the idea seems like a particularly good one. The pads feel solid and playable, with just a small amount of 'bounce'. Although they're not large, there's enough room on each one to allow simple, two‑finger 'rolls' to be played.

The pads are velocity sensitive, which you'd expect, and pressure (ie. aftertouch) sensitive, which you might not. The threshold for the minimum force to trigger a note‑on is adjustable, and whereas keyboard velocity response is linear, the pads offer a choice of four velocity curves. Sounds can be assigned to the pads in four banks, allowing a total of 48 assignments, accessible in groups of 12. Pads can send MIDI notes or Program Change messages, and can operate in one of two modes: Momentary (normal drum-pad behaviour) or Toggle (a note‑on is sent on the first hit, a note off on the next, and so on).

The MPK25, like the MPK49, incorporates a Note Repeat function borrowed from the MPC‑series workstations, which is simple but surprisingly effective. Using Note Repeat, pads can be hit and held down to trigger repeated playback of the assigned sound. The interval between repetitions is controlled by the Time Division parameter, which can be set to 1/4 (quarter notes), 1/4T (quarter note triplets), 1/8, 1/8T, 1/16, 1/16T, 1/32 and 1/32T.

Note Repeat makes it easy to create drags and rolls that would be impossible to play live on the pads, and fiddly to step‑program in your sequencer. Combined with the pads' pressure sensitivity, this opens up a range of possibilities. For example, where a sound source has filter cutoff modulated by MIDI note velocity, you can play real‑time filter‑sweeps by holding down a pad and varying the pressure. If the sound source is a 'one‑shot' sample, the result will be a rhythmically gated sweep, its phrasing determined by the tempo and Time Division settings. There's also a 'gate' parameter, for controlling the duration of the repeated notes, and a 'swing' parameter offsets alternate repeats to 'loosen up' the phrasing.

Like the MPK49, the MPK25 has a built‑in arpeggiator, which is easy to use and works well. As with Note Repeat, the Time Division setting controls its phrasing, and there are adjustable gate and swing parameters. Six arpeggio types are available: Up (from the lowest to the highest note held); Down (the opposite of Up); Inc (Inclusive, going from lowest to highest notes and back again, with lowest and highest notes retriggered when the arpeggio changes direction); Exc (Exclusive, like Inclusive, except that the lowest and highest notes aren't retriggered); Rand (Random); and Chrd (which repeats the held notes as a chord). The arpeggio's range, in octaves, can also be adjusted.

In spite of its small size, the MPK25 manages the neat trick of not seeming at all cramped. The full‑sized keys and drum pads are every bit as playable as those of the MPK49, and the controller knobs are large and well‑spaced enough to avoid being fiddly. Overall, the MPK25 feels like a serious, grown‑up MIDI controller, rather than a scaled‑down toy keyboard.

Its compact size might make the MPK25 a good choice for the smallest home studio setups, or for musicians on the move seeking a powerful, professional‑quality MIDI controller that's small enough to travel with. Its two‑octave span limits its usefulness as a live performance keyboard, but for studio‑based programming, or simple triggering of sounds in a live situation, the MPK25 could be ideal.

Novation's Remote SL25 is probably the MPK25's closest competitor, offering a set of drum pads alongside its other assignable controls. Edirol's PCR range includes several keyboards that might rival the MPK25 for compactness and portability, although none quite matches it for features. Emu's Xboard controllers would also be worth a look.

Included with the MPK25 is a useful Vyzex MPK25 preset editor and librarian application, for Windows and Mac OS X. The software is developed by PsiCraft and based on Sound Quest's highly‑regarded MIDI Quest universal editor and librarian. The editor does what you'd expect, connecting to the MPK49 via USB and/or MIDI, providing a point‑and‑click user interface via which all imaginable preset‑editing tasks can be accomplished, and allowing banks to be written to and read from computer. It works well, and is definitely a useful addition to the bundle.

A special 'Akai Edition' of Ableton's Live Lite software is also supplied, including custom presets for Live's Impulse virtual drum machine. Asyou may know, Live Lite is a cut‑down version of Ableton's popular Live sequencing application, and Live Lite users are offered an upgrade path to the full version. A serial number must be entered during installation and the software activated via an Internet connection before it can be used.

A well‑built, playable and powerful MIDI controller in an unusually small package.

What Do Mastering Engineers Actually Do?
5 days 21 hours ago.