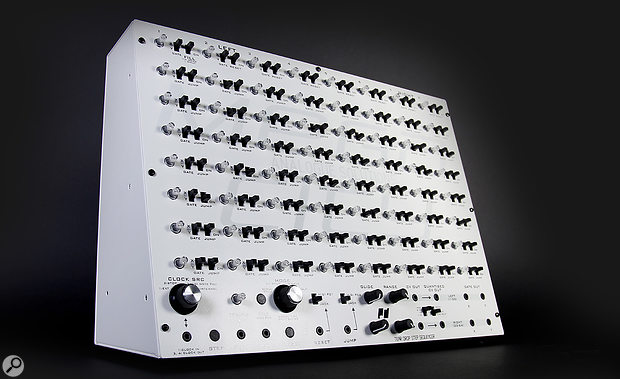 Analogue Solutions’ Megacity is a step sequencer like no other...

I first encountered a Megacity up close at SynthFest UK 2016 and was instantly fascinated by its falling patterns of green light. This large form-factor analogue sequencer offers an impressive 64 steps optionally divided into two channels of 32 and, earning its sci-fi kudos, the unique ‘teardrop’ motion was inspired by the Rutger Hauer ‘tears in the rain’ monologue from Blade Runner.

Although first and foremost a CV/Gate design, MIDI isn’t left out; two different MIDI synths can be sequenced and various functions triggered using MIDI Notes. Above all, simplicity of operation is the main priority — there are no menus, hidden features or multifunctional controls.

The Megacity is an imposing white metal wedge, a rack-dominating 7U high if the optional rack ears are fitted. Alternatively, you might go for the wooden side panels that also fit the Telemark synth. However you mount or position it, the Megacity is a vertical feast of controls to tempt the hands-on sequencer addict. Its 430 x 306mm panel is almost entirely filled by eight columns of switches and transparent knob-stalks. It’s no lightweight either — at 4.4kg, this is one mega structure that won’t blow over easily!

Precise tuning of all those tiny knobs can be made faster and easier by attaching regular knob caps, although you’d lose the visual feedback of the green chase lights underneath. Fortunately, there are transparent knobs available, although you’ll need to source them for yourself, but it’s well worth considering. It’s even worth opting for a few slightly different knob types to help break up the panel’s otherwise uniform grid.

Having plugged in the power adaptor, your first decision will be the choice of clock source, with three available. Unusually, none of these include MIDI Clock. Instead you can opt for an external clock pulse, a series of MIDI Notes or the internal clock. If you pick an external source, the jack immediately below the clock switch acts as an input, but if you prefer either MIDI Notes or Internal, this becomes a clock output — neat!

There aren’t any regular transport buttons. The four-position source switch offers Stop, but other than that, you make a selection and the sequencer plays. Beneath the Tempo knob is a clock CV input, providing voltage control over the tempo. Any modulation source or even another sequencer can therefore modulate the speed, which is a treat for the more experimentally-minded. While the Megacity has more steps than a typical step sequencer, it is also a very powerful ‘super LFO’ or dual LFO.

For the moment, let’s assume the clock source is the internal clock. Moving along the panel, the next key control is another four-way switch, Mode, used to determine how the eight columns of note and trigger values operate. In the first position — Serial — the Megacity plays a single sequence of up to 64 steps. You turn the knobs to program melodies, bass lines, etc.

Serial mode has another option, Fill, but we’ll come to that after a basic introduction to the sequencer’s personality. To do this, at least one synthesizer needs connecting and, for convenience, all the jacks are front-mounted. If you cast your eyes to the bottom right-hand corner, you’ll notice a pair of channels (left and right), each with X and Y gate outputs, plus CV outputs in ‘raw’ and quantised forms. The left channel encompasses steps 1-32, while 33-64 make up the right.

The CV output range (up to approximately 5V) is set independently for each channel along with a value for glide. Glide is a sweet addition to any step sequencer, adding smoothed transitions between the steps, which translates to portamento when the CV is routed to the (1V/oct) pitch input of an oscillator. The smoothing is also very handy for those occasions when the sequencer is employed as a complex modulation source.

For conventional sequencing, you’d connect the X output to the gate input of your synth, but having the Y alternative is a rare bonus. As one example, imagine a scenario in which X triggers a short, punchy envelope but the Y gate drives a slower, longer envelope. By toggling any step to X or Y, you have instant access to more flexible articulation than the typical ‘trigger or not’ of most sequencers. Actually, with 128 black plastic switches to play with, I’d be strongly tempted to add dabs of coloured paint to some for a clearer visual overview of their positions.

The CV quantiser is an unusual implementation that is only kicked into life by an X gate event. If, therefore, you manually step through a pattern using the Step button (a typical technique for tuning each step), be aware you’ll only hear the results of your knob turning at the unquantised CV output(s). For users who prefer the friendly semitones produced at the quantised outputs, turning the knobs during playback is the way to go. The Range knobs set the spread of notes that are available at both the CV and MIDI outputs. 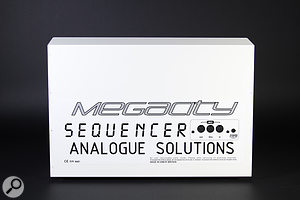 The Megacity’s rear panel is a simple affair, with just MIDI In, Out and Thru ports and a socket for the external power supply.The second switch in each column is where the quirkiness begins — and if you look closely you’ll notice that the top switch is labelled differently to the rest. Leaving the first column aside for now, all the others begin with a Reset option. When the sequencer reaches any column in which Reset is active, it immediately returns to the first step. You can therefore use the top set of switches to restart your patterns at any time. A button and CV input mirror this functionality for added flexibility.

The remaining seven switches in every column are labelled ‘Jump’. Jump’s purpose is to immediately skip the column’s remaining steps and it, too, has a CV input so you can automate the process or drive it by random voltages. Dynamic application of both Reset and Jump can transform any pattern into a shifting, unpredictable cascade of notes. The only step you can’t bypass is the first.

Since Reset wouldn’t make a lot of sense for the first step, it’s been given a different function — Fill. Fill only works in Serial mode, and even then, only when you press the Fill button or send a voltage to the Fill input. Fill engages the right-hand channel (located from column five onwards) and kicks in at the normal end of a pattern. If you invoke it multiple times, you get a fill for every invocation.

The remaining three play modes are Splits, ie. the two channels run independently with the right channel optionally at half or a quarter of the speed of the left. Since there are independent CV outputs, the Megacity is therefore that very rare beast — a 2 x 32 analogue step sequencer. Switching modes during playback, plus manipulating the matrix of switches, is a sure-fire route to constantly-changing patterns and complex polyrhythms.

Already we’ve almost covered the Megacity’s base functionality, but there’s one more switch to consider: ‘Add R CV To L CV’. Ordinarily, the left and right CV outputs are entirely separate but this switch is included to make connectivity more straightforward when using Serial or Fill modes. Once enabled, the raw voltage of the right channel is added to the left, meaning one set of connections can control a single synth. However, if you experiment with this switch in any of the Split modes, weird and exotic tunings are an interesting by-product.

While primarily a CV/Gate sequencer, the Megacity also talks MIDI, its left and right channels fixed at 1 and 2. Ordinarily, notes are transmitted at the maximum velocity, except when you flick the unambiguously-named ‘Send R CV To Left MIDI Velo’ switch. In this way, step values on the right channel become velocities for notes on the left. Creating a velocity track of a different length is a groovy way of moving accents around.

Due to the dual-channel nature of the MIDI processing, Serial mode exposes a peculiar quirk: the note ‘ons’ are sent on MIDI channel 1 but the corresponding note ‘offs’ are sent on channel 2. If you planned to use Megacity extensively as a MIDI sequencer, it’s probably better to stick to Split mode or risk hanging notes.

As with the CV tuning, it is often advisable to keep the Range knobs at their maximum. In that way you can return to your patterns later and expect them to be unchanged. Spooky effects occur when you reduce the range during playback! Incidentally, even with the range set at maximum, the highest MIDI note generated is 67, ie. not much above middle C. The sequencer doesn’t have any built-in means of transposition, but if you happen to be using it with a synth such as Analogue Solutions’ own Nyborg or Telemark, you can send the CV patterns in the usual way and the transposing notes via the MIDI input.

I mentioned earlier that MIDI Clock is not part of the Megacity’s repertoire, but it will happily sync to analogue clock pulses or to a series of specific MIDI notes (00) on channel 1. Using MIDI notes in this way to provide sync is kinda kooky but it does have one possible advantage. Depending on the accessibility of the notes used as the source (eg. another step sequencer or drum machine), you’re able to play around with the clock dynamically in ways you could not replicate with a regular MIDI Clock.

Incoming MIDI notes (01-03) are also used, as a means of introducing Reset, Jump and Fill respectively. For the first two of these, you’ll need to decide via a switch whether MIDI or CV input is to be honoured.

The more I played with the Megacity, the more I enjoyed doing so — especially when I’d fitted some of my own knobs. The teardrop design takes you to places no other sequencer will and the Fill functionality generates variations that are rare in the step sequencer world. While turning knobs to make note patterns is familiar enough, the Megacity’s secrets are only laid bare when you start to interact with all those black switches.

Although not cheap, this is a large, solid and control-strewn sequencer, without menus or multifunctionality. Its 64 addressable steps represent enormous power and by dividing these into two channels, the performer is given an endless and evolving world of polyrhythms at his or her fingertips.

The Megacity’s MIDI implementation is fairly basic but could be useful in some situations. For me, it really shines at the heart of a modular/analogue setup, and when you don’t require regular sequencing, it can serve as a highly tweakable CV modulation source, a dual complex LFO or a trigger generator. Great fun!

Not many analogue sequencers have so many individually addressable steps, and even those that do — eg. the more expensive Koma Komplex — don’t make it straightforward to produce 64-step patterns without patching in external modules. At the other end of the scale, Korg’s tiny SQ-1 is a fun-sized eight-step machine with some cool features and equally small knob stalks, but you’d need eight SQ-1s plus some CV mixing to compete with the Megacity.

Doepfer’s Dark Time is another small and compact sequencer, one with just 16 steps and a pretty rammed interface. It also lacks glide and per-step trigger choices but in its favour includes scale quantisation, a selection of voltage ranges and several choices of direction.

A splendid-looking vertical sequencer, its falling patterns of green light taking a totally different approach to everything else. It’s large, sturdy and direct and with some transparent knobs fitted would be even better.