Auto-Tune has been the industry‑standard pitch‑correction tool ever since its 1997 release. Does the latest Evo version keep the competition at bay? 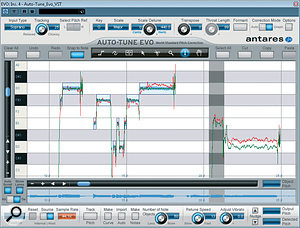 Love it or loathe it, pitch‑correction software is now a ubiquitous part of the modern computer‑based recording studio. Antares were pioneers of this technology and Auto‑Tune became a clear industry standard soon after its release in 1997. Of course, other companies were not going to let Antares have things all their own way, and alternatives from the likes of TC Electronic/TC Helicon and Celemony have certainly made their mark. SOS reviewed Auto‑Tune 5 in a head‑to‑head with Celemony's plug‑in version of Melodyne in the March 2007 issue (/sos/mar07/articles/at5vsmelodyne.htm), and Antares are now back with what is, in essence, Auto‑Tune 6. However, the new version is named Auto‑Tune Evo, and includes some significant new features.

Auto‑Tune Evo retains the basic dual‑mode operation of earlier releases. An 'auto' mode provides easy‑to‑use, real‑time correction options and, if the original performance is pretty good in the first place, can often do the job with the minimum of fuss. If the tuning problems are more significant, the 'graphical' mode provides tools for editing indvidual notes via curves and lines.

All these functions are retained in Evo, but they have been accompanied by some significant new features and a reorganisation of the user interface. The most obvious visual change has been the expansion of the common controls section along the top of the main window. This includes the return of the Tracking control: in Auto‑Tune 5 this had been relegated to the Options screen, a move which apparently proved unpopular with many users. In the native versions of the plug‑in, this common area now also includes formant and throat‑modelling technology derived from the Avox 2 plug‑in bundle (reviewed in the October 2008 issue). The controls are basic — in simple terms, allowing the user to adjust the resonant frequencies and throat length of the singer's body — but used sparingly, they can produce a subtle shift in the character of the voice.

Real‑time pitch‑shifting is also included within the common controls area and is available in all versions of Evo. In most other regards, the operation of auto mode remains as before, so existing Auto‑Tune users should find the transition a relatively painless one.

However, the changes are not merely cosmetic, and the underlying pitch correction engine has undergone a complete overhaul, to improve the end results and to take advantage of the increasingly powerful processing available in modern personal computers. The differences in the engine are significant enough that Auto‑Tune 5 and Auto‑Tune Evo are not interchangeable, so existing users will need to run Auto‑Tune 5 alongside Evo if revisiting older projects. Potential purchasers should also note that pricing of new and upgrade versions of Evo vary depending upon the format required. 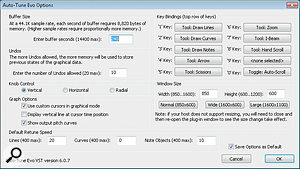 The Option dialogue allows the size of the Evo window to be adjusted and keyboard controls set.

The most eye‑catching new features are within Evo's graphical mode, where two additions really stand out. First, as well as the existing curve and line editing functions, graphical mode now includes 'notes'. At first glance, one can't help but be reminded of the way Celemony's flagship product operates. However, while Evo's notes do share some of what Melodyne's 'blobs' offer, as outlined below, the detailed functionality is different.

The second key feature is the provision of object‑specific Retune speeds. This might not sound like such a big deal but, in terms of making the graphical mode easier to use, it is a significant change. The Retune setting controls how quickly pitch is pulled back into line with the target note. In previous versions, this was a global setting — easy to use, but not very accommodating when you had one phrase that required a fast Retune speed but another where a fast setting produced an unnatural correction. The Retune control could, of course, be automated in the host sequencer, but in Evo you can select sections of the performance (for example, a section that represents a single word or phrase) using the I‑beam tool and then apply a unique Retune speed to just that selection. This can almost be thought of as a halfway house between auto mode and the time‑consuming curve editing of graphical mode.

The 'note' objects now provide an additional option for graphical editing. Once the Track Pitch function has been used to capture the actual pitch of a performance (displayed as a red curve), clicking the Import Auto button will produce a green curve that shows how the pitch is being corrected by the settings from the auto mode window. However, if the Make Notes button is pressed, Evo generates note objects and a green curve that shows the pitch correction within notes and the links between them. Note generation can be done for a whole performance or just a selected time range, and the user can control how many notes are generated. If engaged, the Snap To Note button forces notes to centre their pitch on the nearest 'correct' note. The useful Show Lanes button can also toggle on and off a shaded lane display for each note (similar to that seen in most MIDI note editors) and this can make moving note objects to different pitches a little easier.

Once generated, notes can be adjusted in both length and pitch; as they are moved, the green pitch curve is also adjusted. This mode lacks the very detailed editing provided by manipulating the curves themselves or drawing your own pitch lines or curves, but in most cases it is a very much faster way of doing the bulk of the editing required. Incidentally, only one graphical editing mode is available at any one point along the timeline — curve, line or note — but they can be freely mixed and matched for different phrases within the performance. The new 'note' feature is a big plus in terms of ease of use and, while the options for manipulating pitch within and between notes are perhaps not as flexible as those found in Melodyne, it certainly takes a lot of the work out of graphical-mode editing.

I tested the VST version of Auto‑Tune Evo with Cubase. It performed very well and certainly didn't seem noticeably more taxing on the host system than Auto‑Tune 5. The only technical issue I encountered was that some of the graphical-mode tools occasionally went AWOL, although this was simply resolved by engaging the 'Plug‑in Editors Always On Top' settings from within the Cubase Preferences / VST / Plug‑ins options.

Running Auto‑Tune 5 and Evo side by side suggested that any differences in the quality of the pitch correction are subtle when using auto mode, although Antares suggest that Evo's new engine does make a better job of poorer‑quality signals. For me, the real difference was in graphical mode, where the variable Retune speed and note editing made getting a natural result with more problematic material considerably faster.

For serious Auto‑Tune users (that is, those that regularly get beyond auto mode), I think the new graphical mode features will be very welcome, and make upgrading well worthwhile. In this regard, Evo is a significant step forward from Auto‑Tune 5 in terms of ease of use, regardless of any more subtle (to my ears at least) improvements in the quality of the pitch‑correction algorithm.

Good though Evo is, I suspect the advances will not be enough to persuade most existing Melodyne users to jump ship. However, for those looking to buy into the world of top‑of‑the‑range pitch correction for the first time, the choice between Evo and Melodyne is a difficult one unless you can spend some time with both products. Both are excellent and, for 90 percent of pitch‑correction tasks, I suspect either product will get the job done with a minimum of fuss. For my money, Melodyne still has a slight edge when it comes to more problematic pitch issues or creative re‑pitching of a melody line. However, with the new Evo note-editing mode, Antares have significantly closed the gap and, if your vocal is already decent, Evo's automatic mode remains the most straightforward means of tightening overall pitch.

The most obvious alternative to Auto-Tune Evo is Celemony's Melodyne, with the plug-in version now proving to be most popular. It lacks Evo's auto-mode ease of use, but its note-based graphical editing is both slick and very sophisticated. For Powercore users, the other obvious possibility is TC-Helicon's Intonator HS, which was reviewed back in the November 2004 issue, and the same company also have pitch correction built into a number of their hardware products.

Evo represents a very useful evolution of the Auto-Tune line, and is an obvious upgrade for existing power users.