What's black and white and red all over? Behringer's fantastically cheap new audio interface and MIDI controller, of course! 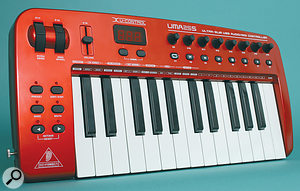 Behringer already make MIDI controllers, keyboards and audio interfaces and, like various other manufacturers, they have now neatly combined all these functions into a single unit. The UMA25S features two octaves of full‑sized, velocity‑sensitive keys, pitch and mod wheels, eight rotary MIDI controller knobs and eight MIDI‑programmable buttons, along with a USB audio interface with stereo line in/out, and a mic input and headphone output. You also get a shoulder strap for on‑stage use, a 'mic and headphones' headset, and a soft gig bag. Most remarkable of all is the price — all of this will cost you less than £80$200!

Behringer have gone to some trouble to make the UMA25S as portable as possible, with an ultra‑slim 1.8‑inch thick casing in a fetching metallic red colour. The shoulder strap definitely adds to its live appeal, but the most important design aspect for stage posing is that it can be powered via its USB cable or by three AA batteries. This means that you could use it either as a stand‑alone MIDI controller, connected to your main rig using a MIDI cable, or via a USB cable if you want to use the audio features and supplied headset. In both scenarios the rear-panel cable clamp will greatly lessen the chances of you accidentally pulling out the plug mid‑solo.

A third power option is a 9V DC power supply (not included), although I can't see many users adopting this, especially as once you power up the UMA25S via the USB connection there's a further MIDI option. It can either continue transmitting MIDI data directly to the rear-panel MIDI output, or act as a Thru port — ferrying data from your sequencer to other hardware while you transmit your MIDI performance to your sequencer via the USB connection.

The MIDI controller functions are surprisingly comprehensive for a device of this price. The eight rotary controls can be allocated to any MIDI continuous controller number, and there's also a dedicated volume slider that always generates MIDI controller 7 data. The eight push‑buttons beneath the rotary knobs can also have any MIDI function allocated to them, although with a click of the MMC (MIDI Machine Control) button to the left of the keyboard, these instead generate standard transport‑control data. As you move any of these knobs or press any of the buttons, the current parameter value appears in the three‑digit LED display, providing instant visual feedback.

The centre‑sprung pitch‑bend wheel and unsprung mod wheel are slightly above and to the left of the keyboard, but not too far away that they cause performance problems, and they too can be re-allocated to generate other MIDI data if required. Beneath these wheels are six buttons with LED status indicators, for octave down and up, and four internal functions — the aforementioned MMC, plus Mute, Preset and Edit/Exit.

The Mute button prevents MIDI continuous controller data being transmitted while it's latched on, preventing accidental changes. There are also 16 Preset locations for you to store your own sets of knob and button allocations, while the Edit/Exit key lets you enter the new data, in conjunction with the 25 secondary key functions (one for each music key). I can't help feeling that a computer‑based editor would have been far less frustrating to use, but at least the secondary keys include a Learn function so you can transmit the MIDI message that you want the UMA25S to generate. Completing the MIDI functions are rear-panel sockets for both a sustain switch and expression pedal, as well as a standard MIDI output to connect to hardware synths or your sequencer.

The audio spec is more modest. The rear panel provides unbalanced stereo line ins and outs on phono sockets, a mono 3.5mm mic-input socket and rotary level control, and 3.5mm stereo headphone output, again with its own level control. There's also a handy Direct Monitor switch with an associated rotary mix control, which lets you blend the signal being recorded (with zero latency) with the line and headphone output signals. These three rotary controls are a little fiddly, since you can't see them from the front, but they can at least be operated by 'feel' once you remember where each one is.

Unsurprisingly, the back of the UMA25S is simply crammed with sockets for its various audio and MIDI duties — and on top of all that there are controls for headphone and mic input level and direct monitoring.

Keyboard actions are a notoriously personal choice, and I'm sure many musicians would find this 25‑key, slimline design perfectly adequate. However, I can't say I personally got on with the limited travel of the 'half‑action' keyboard — the white keys felt OK, but the black ones felt very spongy, and I found it difficult to play trills or get consistent velocity response without hitting the keys rather than pressing them.

I was rather more impressed by the other MIDI controller features. The various buttons all gave a decisive click when pressed, while the pitch‑bend and mod wheels, along with the slider and rotary controls, have a smooth and precise action with a reassuringly rubbery 'grip'. Although I'd love to see the rotary knobs with coloured pointers for better visual feedback, in practice their prominent pointers were easy to feel even in subdued lighting conditions.

You can't expect cutting‑edge audio quality at such an entry‑level price‑point, and the two line‑level inputs and outputs offer sample rates of 32, 44.1, and 48kHz, but in 16‑bit format only. Obviously, this means higher background noise levels than you would get from 24-bit, as well as more limited headroom when recording.

However, I had no problems running under Windows XP, for which Behringer supply the freeware ASIO2KS generic ASIO drivers (I first discussed these in PC Notes way back in June 2003). I was able to coax an output latency of just 4.4ms from them at 44.1kHz.

Audio proved to be clear and clean, with an acceptable signal-to-noise ratio during playback (the Behringer specification quotes a typical 100dBA), making the UMA25S a useful companion for mobile sequencing duties, although I found that the headphone volume was too low even with the rear-panel level control turned to maximum. However, with a quoted signal-to-noise ratio of just 88dBA, the recording quality can only be described as rough and ready by today's standards, although it's still perfectly adequate for routine duties, as well as for applications such as podcasting — for which the UMA25S is equipped with software, a handy quick‑start podcasting guide and, of course, the included headset.

If you travel a lot or have limited space for your home recording setup, a slimline keyboard controller like this may be an excellent choice, and the built‑in audio interface could save you even more room. Opinions may vary widely on the half‑action keyboard, but this little red keyboard certainly looks elegant, is highly portable, and with its gig bag and headset it should find plenty of users on a budget. You certainly get a huge number of features for your money.

There are two‑octave controller keyboards available at cheaper prices than the UMA25S, such as Korg's new and tiny Nano Key (reviewed elsewhere in this issue) at around half the price. If you want a more sophisticated, semi‑weighted keyboard with aftertouch, there's M‑Audio's Axiom for not a lot more than the UMA25S. However, if you want built‑in audio features as well, there's almost no competition. Edirol's now-discontinued PCR1, with its half‑action keys, was probably the closest, but cost nearly three times as much. Behringer really have no competition at their £80$189 price point.

The UMA25S is 'plug and play' with Mac OS X, Windows XP and Vista 32‑bit, so you can use its generic audio and MIDI functions immediately, without having to install any drivers. However, if you're using a PC there are benefits to manually installing the supplied drivers. The Behringer MIDI driver adds multi‑client operation, so you can send data to several applications simultaneously, while the audio drivers provide low‑latency ASIO performance, which is almost essential if you want to play any soft synths in real time.

Also on the driver CD‑ROM is a bumper freeware bundle. Mac and PC users both get the Audacity audio editor, some simple VST host applications, and podcasting software. While PC users also get the Kristal audio‑only sequencer, as well as over 100 freeware virtual instruments and 50 plug‑in effects, Mac users fare less well, with fewer plug‑ins and instruments, and no audio sequencer. However, there's a second Mac/PC CD‑ROM containing a special Behringer Edition of Ableton's Live Lite 4 DAW application, so nearly everyone should be pleased, overall.

Although it won't win any awards for its keyboard or audio quality, Behringer's UMA25S faces little or no competition at this price point. Recommended for those on a tight budget who need MIDI control and an audio interface in one slimline and decidedly cute‑looking package.