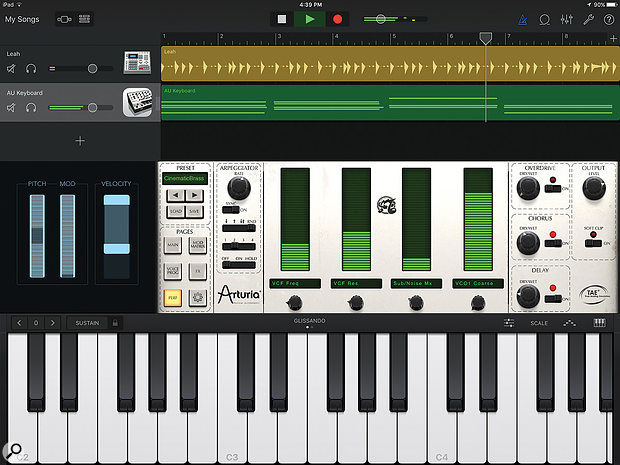 GarageBand 2.1 now takes advantage of the larger screen real–estate of the iPad Pro, allowing you to use the Tracks and Instrument views simultaneously. The Instrument view shows Arturia’s iSEM running as an Audio Unit.

During the introduction of the iPad Pro in September 2015, Phil Schiller, Apple’s SVP of Worldwide Marketing, commented how the device’s larger screen can make it an “amazing musical instrument”, showing a slide of GarageBand running on the company’s newest iPad. However, the iPad Pro’s display showed both Track and Instrument views simultaneously — something not possible with the then–current version — so it seemed as though a new version of GarageBand would shortly arrive.

Released the day before the Winter NAMM 2016 show began, GarageBand 2.1 does indeed support the iPad Pro, but it also has new features to benefit all users. When you start a new Song, you now have the option to use Tracks (as before) or the new Live Loops. If you select Live Loops, rather than seeing a carousel of Instruments, you’ll be presented with a selection of templates named after musical styles, such as EDM, Dubstep, and others that would make me feel equally old just for typing. These provide you with something to play around with immediately, although you can also choose an empty template.

Live Loops displays a grid of cells, with each cell representing a loop. To add a loop to a cell, select it and tap again to choose an existing loop or use an Instrument to create a new one — over 1200 new Apple Loops and sounds have apparently been added to this update. Cells can be either audio or MIDI, but once you have a cell of one type on a row, all other cells on that row must be of the same type. As you might expect, you can tap cells to play and stop them, or tap one of the column triggers along the bottom to play all cells in a given column.

When the Edit Cells button (bottom–left) is enabled, you can tap a cell to bring up various clipboard controls, or press Edit to adjust the loop, which is especially useful if it’s MIDI. Double–tapping brings up settings for that cell, such as length, quantisation, reverse, and the playback speed. You can also set a play mode for each cell: Play/Stop (the default), Play while pressed, or Retrigger, which sets playback of a cell back to the beginning. Once you’ve got a grid of cells you’re happy with, you can record a performance, which can then be edited in Tracks view like any other GarageBand Song.

Live Loops offers a surprising depth of functionality for what initially seems like quite a simple feature set, but it gets better. Complementing Live Loops are the new master output Remix FX controls, offering two XY pads to control one of eight effects (the defaults are Filter and Repeater), faders for gating and down–sampling, and three buttons for reverse, scratch, and tape stop. When recording, any performance gestures made with these controls are written to a special FX Track that appears in Tracks view, and although you can’t edit the specific data you’ve recorded, you can perform basic Region–editing tasks. The Remix FX controls are also available if you start your song in Tracks view. 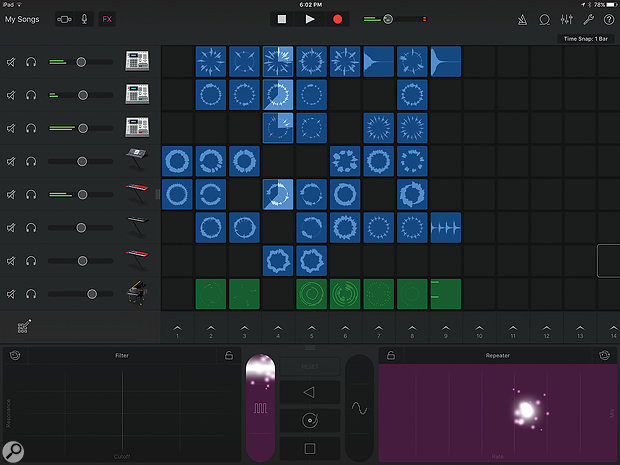 GarageBand’s Live Loops take a grid–based approach to music creation. Here you can see the Gate and Repeater Remix FX controls being manipulated at the same time thanks to multi–touch.

GarageBand 2.1 also features a new Drummer Instrument, bringing some of the virtual drumming abilities of Logic Pro X and the OS X version of GarageBand to your mobile device. The default drummer is Kyle, who we’re reassuringly told is “influenced by modern rock, but comfortable with most genres”. Should Kyle not be comfortable with your musical genre, eight others are provided, including Leah, who apparently “embraces a lean minimal production style to create, subtly–evolving tech house beats with a tight, synthetic–sounding kit”, whatever that means.

The Drummer interface will be familiar to anyone versed in the OS X version, and you adjust settings for each Drummer Region in much the same way. There are presets for each drummer, an XY pad to balance the loudness and complexity of the drumming, and you can make your drummer swing in four different ways — or not. You can set which pieces of the kit are played, as well as choosing from a number of different patterns for each kit piece, and there’s a slider to adjust the fill frequency.

Apple have done a really good job with the Drummer interface, especially considering how it adapts between the difference screen sizes of the iPad and iPhone. Controls like the XY pad are displayed smaller on the iPhone and become enlarged when touched, whereas the iPad displays them full–sized.

Since Apple have added Drummer functionality from Logic, it’s perhaps a shame they didn’t do the same with Alchemy, given that the iOS version of this instrument disappeared when Camel Audio were acquired. Maybe in a future update?

Using GarageBand on an iPad Pro was a particular — and unexpected — pleasure. Apple have updated the interface to take advantage of the larger display, so while a regular iPad shows eight Tracks in Track View, the iPad Pro shows 11. But the best use of the larger display, as mentioned in the introduction, is that you can still work with Tracks view (albeit with a reduced three–track height) when you’re in an Instrument view.

GarageBand 2.1 also supports 3D Touch on the iPhone 6s and 6s Plus. Quick Actions from the phone’s Home screen enable you to quickly start a new Song using Tracks or Live Loops, and you also have access to the two most recent Songs. 3D Touch is also used to provide polyphonic aftertouch for suitable Keyboard Instruments, but a particularly neat idea when you’re playing a piano Instrument is the use of 3D Touch to toggle the Sustain switch.

Rather than recording the audio output from other apps via Inter–App Audio as in previous versions, you can now use an Audio Unit Instrument that loads within GarageBand and can be triggered just like any of the built–in Instruments.

Moving from hardware support to software, GarageBand now hosts third–party Instruments via Audio Unit Extensions, which were introduced in iOS 9. Rather than recording the audio output from other apps via Inter–App Audio as in previous versions, you can now use an Audio Unit Instrument that loads within GarageBand and can be triggered just like any of the built–in Instruments. This is great, although at the time of writing one of the only instrument apps I could find that supported Audio Unit Extensions was Arturia’s iSEM. Hopefully more developers will begin supporting Audio Units now that GarageBand has followed Giel Bremmer’s MultitrackStudio in offering support.

To use GarageBand 2.1 you’ll need at least an iPhone 4s or an iPad 2 running iOS 9.1 or later, although I’m guessing performance on these older devices might not be spectacular. Indeed, Live Loops requires at least an A6 processor, meaning you’ll need an iPhone 5 or a fourth–generation iPad or better to use this particular feature. The app is free with new iOS devices featuring at least 32GB of storage, and is priced at £3.99$4.99 for everyone else. GarageBand might not be as sophisticated as Auria or Cubasis, but neither is it as expensive; in many ways, I think it still remains the poster child for how to beautifully implement a music app on iOS.