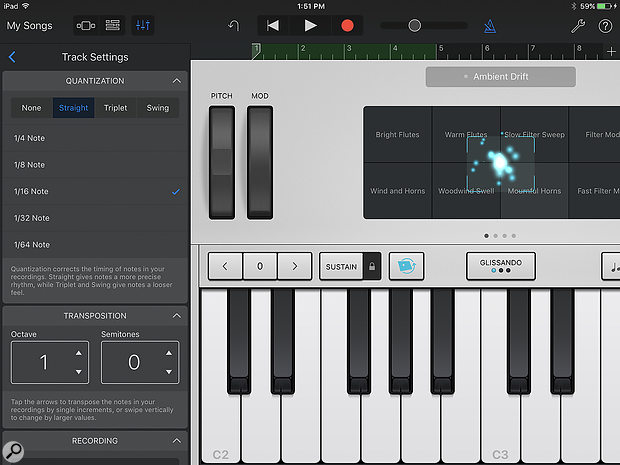 GarageBand 2.2 sees the return of Alchemy to iOS, and introduces a new Track Controls panel for adjusting various parameters.

Last year, Apple released GarageBand 2.1 a day before the start of the Winter NAMM show. Despite the ‘.1’ designation this update introduced a host of new functionality, such as Live Loops, Remix FX, Drummer, and support for Audio Unit Extensions. This year the company decided to follow the same pattern, releasing GarageBand 2.2 the day before Winter NAMM began (along with an updated Logic Control app, and a new version of Logic Pro X on Mac OS).

The first thing you’ll notice when you open the app is a redesigned sound browser. Rather than having one Touch or Smart Instrument per page as you swipe through the browser, Instruments are now organised into categories that occupy each page. For example, where previously there was a page each for the Keyboard, Smart Piano and Sampler Instruments, these are now found on the Keyboard page. Where relevant, a category includes a ‘More Sounds’ button that opens a pop-up browser for all the patches available within that category, making it easy to choose an Instrument with the desired sound ready to go.

In addition to redesigning the sound browser, Apple have also included a new Touch Instrument. When I last reviewed GarageBand I thought it was a shame it didn’t include Alchemy, since the iOS version of this synth disappeared from the App Store after Apple acquired Camel Audio, and it had already been incorporated into Logic Pro 10.2. So I was rather pleased to see the return of Alchemy to iOS with GarageBand 2.2, although it’s only available if you have an iPhone 6 or later, iPad Pro, iPad Air 2, or iPad Mini 4, which will no doubt disappoint users who previously ran the Alchemy app on older hardware.

Alchemy’s user interface is based on the Logic Pro X incarnation, and the GarageBand implementation offers the full Performance view from the plug-in. One feature retained from the original Alchemy app is the ability to modulate the Transform pad’s framing box by tilting your iOS device, and this can now be toggled with a handy button above the keyboard instead of delving into a menu. Sadly (if that’s a fair word to use) you only get “over 150 synth patches”, and there doesn’t seem to be a way to import additional content.

The Audio Recorder has been completely revamped in GarageBand 2.2 and now offers an output level control, the ability to toggle the monitoring of the signal (if you have headphones), and provides a selection of multi-effects. The effects are divided into two tabs: Fun and Studio. Fun provides the kind of effects that are the aural equivalent of the Photo Booth’s filters: Robot, Bullhorn, Chipmunk, and so on — the kind of effects no self-respecting reader of this magazine would ever use. But Studio offers more serious patches for specific recording situations. For example, say you’re recording vocals, there’s a number of patches in the Vocals folder such as Lead Vocals, which gives you control over pitch correction, compression, reverb, and other parameters. These are all real-time and can be adjusted after the recording.

A significant user interface addition is Track Controls, an inspector-like panel that appears on the left-hand side (shifting the display of existing content to the right), which replaces the old Song tab of the Settings pop-over. iPad users get a dedicated Track Controls button on the Control bar, while iPhone users will tap the Settings button and choose Track Controls. This panel is where you’ll access the familiar parameters for level, mute, solo, and effects, and there’s a Track Settings page for adjusting musical attributes. These include Quantise, Transposition, Velocity (if you have an iPhone with 3D Touch), and Recording, which is where you now access the Merge Recording setting and enable a new setting for Multi-Take Recording.

Multi-Take Recording is particularly nifty and is a global mode that applies to all Tracks in a Song, unless Merge Recordings is enabled on a given Track. As you might expect, it allows you to record material over the same range in the Song multiple times, with a number then appearing on the Region to indicate how many takes have been recorded. To select different takes, simply tap the selected region, choose Takes, and then select (or delete) the take you want to use. There’s no comping just yet!

Apple have added a few new effects to GarageBand, such as Bitcrusher and Overdrive, although a welcome addition — at least in terms of appearance — is Visual EQ, a simplified version of Logic Pro X’s Channel EQ. Where Channel EQ offers eight bands, GarageBand offers three — bass, mid, and treble — although it retains the FFT analyser. 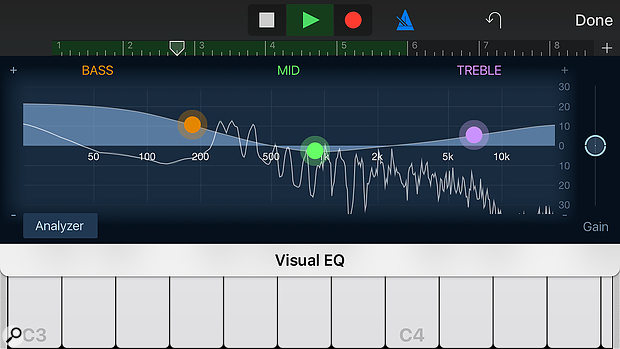 Visual EQ comes to GarageBand, offering three bands and even a frequency analyser.

With the latest version of Logic Pro X (10.3), it’s now possible to share a Project to GarageBand For iOS via iCloud Drive. When you open the shared version in GarageBand you’ll notice it contains just one Audio Track containing a bounce of the Project, which makes sense given that GarageBand wouldn’t have the features to play back a full Project. But if you add Tracks and musical material to the Song in GarageBand, the next time you open the Logic version of the Project, you’ll be asked if you want to incorporate the latest changes from the shared Project. Pretty neat!

There are also many smaller features, such as Visual Count-in. When you press record, a red count-in overlay appears underneath the transport controls, highlighting the current beat of the count-in bar, and disappearing once recording begins. It’s a nice touch, although it can be disabled if you prefer. You can also now use the Smart Piano’s chord strip in any Keyboard Instrument by pressing the Chord Strips button next to the Arpeggiator. And finally, a new Note Pad feature (accessed via the Settings pop-over) lets you jot down your thoughts on a particular Song.

GarageBand For iOS continues to impress as it becomes more sophisticated; and while you likely won’t finish a full production with this app, it’s becoming an increasingly good sketchpad — especially with the increased Logic interoperability. Although there isn’t a single, ‘big new feature’ in version 2.2 compared with the introduction of Live Loops in 2.1 last year, this latest release has some really great features that should help to keep third-party developers on their toes.