The Workstation-class Xeon processors used inside the new Mac Pro models are based on Intel's 'Cascade Lake' micro-architecture. Launched in the second quarter of 2019, this is an optimised improvement over Intel's previous so-called 'Skylake' design and, while I sadly don't have space to go into all the details here, two important changes are support for 28 cores and memory capacities of 1.5TB at speeds of up to 2933MHz, as we shall see. The base Mac Pro uses a Xeon W‑3223 processor with eight cores clocked at 3.5GHz, and four other processor options are available: a 3.3GHz 12-core Xeon W‑3235, a 3.2GHz 16-core Xeon W‑3245, a 2.7GHz 24-core Xeon W‑3265M, or a 2.5GHz 28-core Xeon W‑3275M. The eight-core processor has Turbo Boost up to 4GHz, while the other chips support Turbo Boost up to 4.4GHz.

Turbo Boost dynamically increases the clock speed based on circumstances predicated by demand, of course, but constrained by factors like thermal limits, how many cores are active, and so on. So while your mileage may vary, given that your Mac Pro's processor isn't going to maintain a sustained clock speed of 4 or 4.4 GHz if you're running all of the cores flat out with a heavy workload, Turbo Boost will provide extra performance in certain situations. However, to give the processor the best possible chance, Apple have given each chip a large heatsink with over 300W of cooling, even though Intel's requirements are roughly two thirds of this when these processors are operating at base frequency.

Each new Mac Pro is supplied with 32GB DD4 ECC memory. And while you're almost certainly going to require more, especially if you're running sizable sessions or projects with large numbers of virtual instruments that pre-load sampled libraries, 32GB seems like a reasonable starting point. The maximum amount of memory you can install into a new Mac Pro depends on which processor you opt for, with the 8-, 16- and 12-core models supporting a maximum of 768GB memory, and the 24- and 28-core processors allowing a monstrous 1.5TB.

To put these figures in perspective, let's first consider cost. Apple will charge you £9000-£12,600$10,000-$14,000 to order 768GB in your Mac Pro depending on the capacity of the modules, and as normal, you'll be able to save a little money by ordering third-party offerings from the usual suspects. However, even that capacity is impressive. Consider a sample library such as Spitfire's BBC Symphony Orchestra: this has an on-disk size of 568GB, so with 768GB RAM you could load the entire library into memory (which you wouldn't need to anyway thanks to streaming from high-speed storage and microphone positions you probably don't need) and still have nearly 200GB to spare for Mac OS, applications, plug-ins and project data. So if you can't justify the expense of a 24-core Mac Pro, I wouldn't be too perturbed by the 'limitation' of only being able to use 768GB memory!

When it comes to expanding the memory, the Mac Pro has a six-channel memory controller supporting 12 slots for memory, and Apple ship four 8GB modules to provide the initial 32GB. Although the memory modules supplied with the Mac Pro models are clocked at 2933MHz, the eight-core system runs this memory at a reduced speed of 2666MHz as it's the maximum speed supported by the Xeon W‑3223. All other processors used in the new Mac Pro range support a maximum memory speed of 2933MHz.

The Mac Pro's memory slots can accommodate either R-DIMMs or LR-DIMMs, and, without getting into too much technical detail here, the germane difference between Registered DIMMs and Load-Reduced DIMMs is that LR-DIMMs offer higher capacities (albeit with a slight decrease in memory bandwidth). The 8, 16 and 32 GB modules offered by Apple are R-DIMMs, while the 64 and 128 GB modules are LR-DIMMs. And though it's possible to mix and match capacities amongst the slots (something Apple don't recommend for performance reasons), R-DIMMs and LR-DIMMs can't be installed simultaneously. 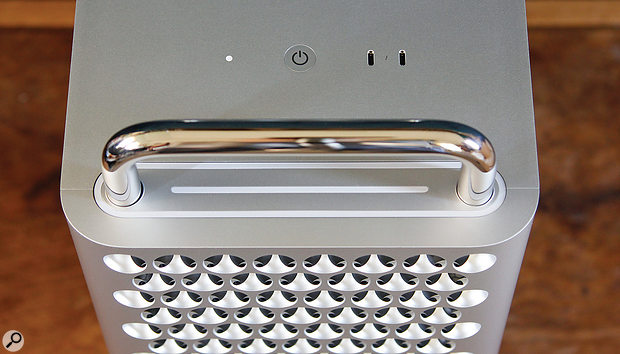 The top hosts the power button and an additional pair of Thunderbolt ports.

Secured From The Inside

For storage, the new Mac Pro has two SSD modules, and ships with one 256GB SSD module as standard. Compared to the basic 32GB memory offering, this amount seems a little paltry for such a machine — most Macs ship with this as the minimum (for a considerably lower cost of admission), and even the new 16-inch MacBook Pro now starts at 512GB for less than half the price of the base Mac Pro model. I think a minimum of 512GB storage would have seemed more palatable, although additional storage tiers are of course available: 1TB costs an additional £360$400, all the way up to 8TB for £2340$2600 — interestingly, there's not even a 512GB option. In each of these configurations, the storage is supplied using both SSD modules, so the 1TB option has two 512GB modules, and so on.

Apple use NVMe as the storage interface (which is faster than SATA), and testing with AJA's System Test Lite utility, I experienced suitably high read and write speeds of 2954MB/s and 2834MB/s respectively. Compared to the last 'pro' desktop Mac Apple released, which would be the iMac Pro just over two years ago, it was interesting to note that the write speed was marginally slower, with the iMac Pro's storage scoring a write speed of 3001MB/s, while the read speed was significantly faster than iMac Pro's 2470MB/s.

The biggest issue for me concerning the internal storage is Apple's use of their own T2 chip, which is employed for many security-related tasks like the secure boot process that prevents you from booting an operating system not trusted by Apple. It also seems to prevent you from using third-party storage as a boot drive. I say 'seems' because there's no mention of this in Apple's Mac Pro Whitepaper or on the company's web site, and, while I could easily have been doing something wrong, I spent a few hours unsuccessfully trying to boot a new Mac Pro with Mac OS Catalina 10.15.2 from something other than the internal drive.

The built-in storage seems to be one of the few components of the new Mac Pro that isn't user-upgradeable, with Apple commenting that "if you need to remove and replace the SSD modules, contact Apple or an Apple Authorised Service Provider" — notice the lack of the word 'upgrade'. Therefore, if it is indeed impossible to easily upgrade the storage from which you can boot your Mac Pro, having at least 1TB for your system drive probably isn't a bad idea. 256GB doesn't seem to go that far today, especially if you install your applications and plug-ins (though not necessarily any associated content) on this drive.

Other than the issue of booting, there are still options for internal storage, aside from Promise's aforementioned MPX-based storage array. For one thing, the motherboard has two SATA connectors, and there are many low-cost, high-performance PCIe solutions to explore that utilise NVMe, which could give you the best of both worlds in terms of location and cost.

Beyond any doubt, the new Mac Pro proves that Apple can still develop a product that both meets and exceeds the needs of their creative professional users.

So the big question, given the advanced architecture and components used in the new Mac Pro, is: how well does it actually perform? If one were to look at raw performance metrics with a tool such as Primate Labs' Geekbench, we can see the Mac Pro performs rather well (see the graph in Figure 1). Referencing average performances from Geekbench's Browser (as the graph also shows) isn't always the perfect method to judge the score you might expect from a given Mac Pro, especially as the 24-core unit I tested easily outperformed the average multi-core score for the 28-core model. But it does at least give you a relative average between the different models. 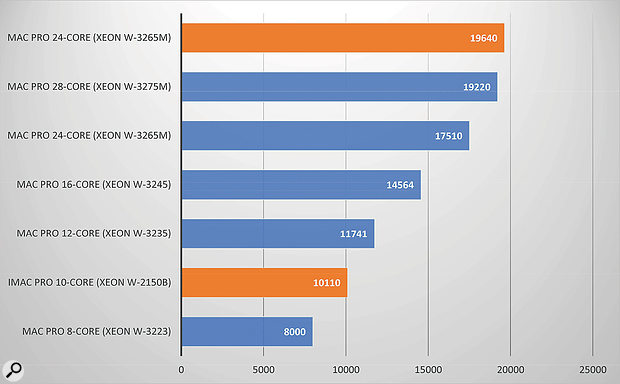 Figure 1: The blue bars show the average results from Geekbench's Browser for models of the new Mac Pro; the orange bars show the Mac Pro model reviewed for this article and the iMac Pro unit previously reviewed in the June 2018 issue.

Apple's own results give a little more insight for musicians, with the company testing a pre-production 28-core Mac Pro against an 18-core iMac Pro and a 12-core, previous-generation Mac Pro (which was the baseline). The iMac Pro showed a 3.7x improvement in running Amp Designer plug-ins, where the 28-core Mac Pro demonstrated a 6.5x increase. The methodology is fully explained in small print on the company's web site, but essentially these tests were carried out last November using Logic Pro 10.4.7 with a project consisting of 253 tracks, each with an Amp Designer plug-in instance applied, and individual tracks were enabled during playback until the CPU became overloaded.

In my own tests I also turned to Logic Pro X, using the more recent 10.4.8 version, and on a 24-core-based system found that I could run a maximum of 1469 Amp Designer instances (using the Britannica Crunch preset as befitting myself). To achieve this, I had 97 stereo tracks with 15 inserts, plus one further track with 14 inserts, each playing back the same stereo audio file, which was the opposite approach to Apple's testing methodology, but one I've used in the past. To put this number in perspective, I could achieve 851 instances running the same project on a 3GHz 10-core, Intel Xeon W‑based iMac.

Figure 2: This graph illustrates the kind of performance increase you can expect in Pro Tools and Logic Pro X.

Trying to be a little more musical, I started working with some virtual instruments to see how writing on a new Mac Pro compared with other systems, loading and programming orchestral instruments from the likes of Spitfire Audio. The experience was great, and ultimately the exercise became a little boring, though not from a creative perspective. Mainly, it was because I could have spent hours attempting to contrive something to max out the system in a manner that would have somewhat defeated the purpose, since writing music isn't about constantly trying to hit the maximum system load — quite the opposite.

Back at WWDC, one of the stations in the 'Pro Studio' area was dedicated to music, with a pre-release 28-core Mac Pro playing back a cue from John Powell's excellent score from the same How To Train Your Dragon movie. John's a Logic user, and this was a mock-up based on his template: he usually employs many computers to run something of this size, but here it was playing back on a single Mac Pro. And while I wasn't allowed to see the full Performance Meter window, which would have shown the breakdown of individual Processing Threads, the CPU meter on transport's LCD showed the system peaking at around 25 percent, which obviously wasn't too shabby.

Given that not everyone is a Logic user, I also tested Pro Tools Ultimate and Cubase Pro (10.5.11) to see what kind of performance you can expect from these applications. With Pro Tools, I loaded up stereo audio tracks with five inserts of Pro Multiband Dynamics and managed to run 1,002 instances, playing back 192 tracks with 42 of those having six inserts. In Cubase, I had 119 stereo audio tracks each with 10 instances of Reverence (using the default preset) before the system fell over.

It should be easy to recreate these tests on your system and observe how your results compare with the Mac Pro I was testing. Each application was running using the built-in audio hardware, with a buffer size of 256 samples.