In the not-so-distant past, desktop Macs for creative professionals represented a significant part of Apple's business, especially in the late '90s when the company were faltering. Even in the modern Apple era, the Power Mac G3 and G4 systems were pre-iPod, the Power Mac G5 was obviously prior to the Intel transition that would later enable laptops like the MacBook Air, and the Mac Pro was launched about six months before the announcement of the iPhone. So when viewed through the lens of the company Apple have become, it's reassuring that they still want to create products like the new Mac Pro and be the company of choice for creative professionals — like musicians and audio engineers — especially given the loyalty and reliance such users have on the Mac platform.

From the new Mac Pro's inception, Apple and their leadership were relatively open in acknowledging the problems that existed in the 2013 model and, importantly, why they existed. Therefore, Apple deserve a great deal of credit with the new Mac Pro, starting from the ground up with an impressive design using the latest technology to provide the ultimate power (in terms of performance, energy and cooling), a modular PCIe-based architecture inside and out, and more. Plus, it's even available in a rackmountable frame.

In fact, perhaps the only drawback is that the combination of these factors has resulted in the most expensive standard Mac Pro configuration yet seen. The 2013 Mac Pro had a starting price of £2499$2999, while the original Mac Pro released in 2006 was priced slightly lower again at £1699$2499; and what's amusing with hindsight is that these initial prices were both deemed costly at the time. If only we'd known! Nevertheless, you do get what you pay for, and you're simply not going to get this calibre of engineering at a substantially lower price. Even if you only consider the chassis and cooling system, there's just no comparison when it comes to the off-the-shelf quality found on Windows-based competition.

If you work on the Mac platform and require top-of-the-line performance with internal, PCIe-based expansion, the Mac Pro is obviously the only game in town. However, the big difference between the new Mac Pro versus the models available over the last few years is that you can now make a purchase with the confidence of knowing that it's not a compromise. Beyond any doubt, the new Mac Pro proves that Apple can still develop a product that both meets and exceeds the needs of their creative professional users.

The next step in GPU performance from the standard Radeon 580X MPX Module is the Radeon Pro Vega II (PVII) MPX Module, costing an additional and not inconsequential £2160$2400. Before continuing, from a performance perspective it's worth remembering that music and audio applications are not graphically intensive in a way that would benefit from adding large amounts of graphic computing power to a Mac. Even technologies that use GPUs for general-purpose computing, such as OpenCL, aren't commonly employed for audio signal processing in mainstream applications. So the only practical reason to contemplate upgrades to the graphics system is if you need different display configurations.

Given that the leap between the 580X and the PVII is rather cavernous, Apple also plan to offer something in between: the Radeon Pro W5700X. Like the Pro Vega II, it will use a full MPX bay and offer the same ports and display configurations with single or dual options possible, but it will do so by sacrificing GPU performance for a lower cost that makes it more suitable for music and audio workflows. W5700X options are currently 'coming soon' and no further details on pricing and availability were available at the time of writing.

If you really want to go crazy, the Pro Vega II Duo MPX Module has two onboard GPUs. In terms of display configurations, you can have eight 4K or four 5K displays, although still with the same support for two Pro Display XDRs. Adding a second PVII Duo MPX Module gives you the ability to connect 12 4K or six 5K displays, or four Pro Display XDRs; and if you have the budget for that many monitors, and the space in which to accommodate them, the corresponding £9720$10,800 extra probably won't seem that much of an outlay!

In addition to the many MPX Modules offered by Apple for the new Mac Pro, the company have also created their own PCI Express card called Afterburner that's available for £1800$2000. The Afterburner card is a hardware accelerator for Apple's ProRes and ProRes RAW video codecs, which are supported by the company's pro video products like Final Cut Pro and compatible third-party applications, enabling the playback of six streams of 8K ProRes RAW or 23 streams of 4K ProRes RAW simultaneously. Since it's obviously aimed at ProRes-based video workflows, Afterburner probably won't be of interest to most people reading this magazine; and while it might provide a minor benefit playing back ProRes-encoded video in Logic Pro X (I don't know if it's compatible with Steinberg's ProRes support), you're only ever playing back a single stream in any case.

What's most intriguing about the Afterburner card, though, is that it's powered by an FPGA (Field Programmable Gate Array), meaning that the card's behaviour can be reprogrammed, and although Apple wouldn't speculate on future uses it's not impossible to imagine Afterburner cards being used to accelerate other workflows. An Afterburner's FPGA could be used as an audio DSP, turning it into something like a Universal Audio UAD-2 card, for example, such that Apple could port Logic's plug-ins to run on a card rather than the CPU. And while it's probably too niche a market, one can dream... 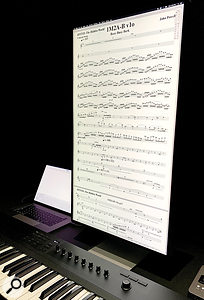 Notation looks gorgeous on the Pro Display XDR, especially when the monitor is rotated at 90 degrees. Here it is showing an orchestra part in Finale from John Powell's score from the third instalment of How To Train Your Dragon.After retiring the company's popular Cinema Display range in 2011, Apple announced a return to this market at WWDC with a new display to accompany the Mac Pro: the Pro Display XDR. Offering a Retina 6K resolution with 6016x3384 pixels, the Pro Display XDR is a 32-inch LCD, offering edge-to-edge glass with borders of just 9mm, and uses the same design language as the Mac Pro for reasons that are again as functional as they are aesthetic. The XDR nomenclature refers to Extreme Dynamic Range, meaning you can expect impressive levels of brightness — 1000 nits sustained with a peak of 1600 — with an equally impressive contrast of 1,000,000:1. A typical computer display might offer around 350 nits with a contrast ratio of 1000:1.

The Pro Display XDR connects via Thunderbolt 3 and, despite being announced alongside the new Mac Pro, can be used with other, compatible Macs running Mac OS Catalina 10.5.2, which handles certain features like portrait and landscape detection. The 'Pro Studio' area at the WWDC had a MacBook Pro running Finale connected to a Pro Display XDR in portrait orientation, for example: the notation looked beautifully crisp, and it was a great way to illustrate a usage case. I immediately wished there was Apple Pencil support so I could make edits directly on the screen, as with Microsoft's Surface Studio.

However, if you further investigate the price and specifications, you'll quickly conclude that this is not the display you're looking for, despite it being the display you'd almost certainly like to be looking at. Apple are clearly aiming this product at those working in video who require better colour accuracy and greater brightness than your average display, but who don't necessarily have the budget typically required for such a reference monitor.

Therefore, in terms of cost, the Pro Display XDR starts at £4599$4999 for the standard glass model with anti-reflective coating, while a second version using a so-called nano-texture glass that further reduces glare is available for £5499$5999. And this is just the cost of the display itself. A VESA Mount Adapter is an extra £189$199, while the companion Pro Stand is an eye-watering £949$999. Both are attached magnetically, and the stand is undoubtedly a cunning piece of engineering, with a hinge reminiscent of the arm in the original iMac G4 that allows the panel to be positioned vertically and tilted forwards and backwards — it's worth trying next time you're in an Apple Store for one of those Homer Simpson moments.

The Many Core Reality

The new Mac Pro features the most processor cores Apple have ever included in a Mac, and, as most people are aware, the performance of suitably written applications improves as the number of cores in a system increases. However, this improvement is never linear, meaning that two cores aren't necessarily faster than one, four cores aren't twice as fast as two, and so on. There are explanations as to why this is the case from a computer science perspective, and although these are understandably beyond the scope of this review, there are also realities that make scaling audio engines a non-trivial endeavour.

Like most Intel processors, the Xeons used in the new Mac Pros support Hyper‑Threading so that each core offers two processing threads to an application. A top-of-the-line, 28-core model will give you 56 processing threads, and this is something that's easily observed in the performance windows of Logic and Pro Tools, for example. However, since I only had a 24-core model with which to experiment, I had 48 processing threads at my disposal; so although I couldn't simulate the performance of a 56-thread system, I could work in the other direction and see what happened when fewer threads were enabled.

To do this, I used the Instruments tool supplied with Apple's Xcode developer environment to scale back the number of threads (and therefore cores) an application could utilise, performing the same tests as those described in the main text. I restarted the application between each configuration change, starting with one, two and four processing threads active, and then incrementing in steps of four until reaching 24 — even I have a life!

The results were rather interesting, although it should be noted that they're based on just one usage scenario — peak-plug-in performance — and that different scenarios will likely yield subtly different results. While the amount of improvement does indeed increase as more cores are added, the most significant of these increases occur before the 32-processing-thread mark. This suggests the 16-core model is probably going to be more than enough for most users, and the amount of extra improvement attainable with additional cores might not justify the extra expense of the 24 and 28 cores. It's also worth bearing in mind that, Turbo Boost aside, the lower-core models do offer higher base frequencies, which could help with individual plug-ins that require a large amount of processing power.

I should note that I didn't include Cubase Pro in results for two reasons, the first being time. Opening my test Project with that many plug-in instances took over five minutes, and this just wasn't practical with the deadline I had on the machine I was using. But, more importantly, Cubase's audio engine is easily the most complex of the three applications I looked at, especially when ASIO Guard is enabled, and I realised I also needed more time to better understand what was going on under the bonnet in order to draw a meaningful conclusion.

Processor supplements (each with Turbo Boost up to 4.4GHz):

The new Mac Pro is clearly the Mac Pro musicians and audio engineers who demand the ultimate in performance and flexibility have been waiting for, positioning Apple with a Mac hardware platform to satisfy the company's creative professional customers for the next decade.