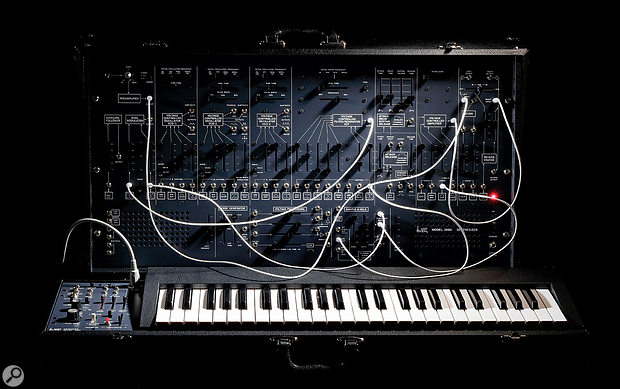 Korg's painstaking recreation of the legendary ARP 2600 may be even better than the original...

Rumours regarding Korg's plans to resurrect the ARP 2600 started circulating at the NAMM exhibition in January 2015, a unit of Planck time (the delay between a New York traffic light turning green and the cabbie behind you sounding his horn) after Korg announced their recreation of the ARP Odyssey. This wasn't altogether surprising; despite being disfigured by Emperor Zorg's fiendish Shrink-o-matic ray, the miniature Odyssey caused an immediate stir and it wasn't long before people were wandering around the show trying to sound knowledgeable by muttering names such as 2600, ProSoloist and Quadra. The baby Odyssey sold well, as did the desktop module that followed in 2016, while a limited number of full-sized units were snapped up in 2017 before the Odyssey FS went into full production in 2018, so it's no surprise that the rumours of Korg's interest in resurrecting other ARP synthesizers refused to go away.

In the summer of 2019, I received a call from Korg UK inviting me to help evaluate a working prototype of their new 2600. So I loaded my vintage 2600P (built in late '71 or thereabouts) together with the 3620 duophonic keyboard with which I use it and headed off to Korg's top-secret underground laboratory. Once there, I tested the sound-generating and sound-shaping modules of the prototype and attempted to duplicate patches on both synthesizers to try to quantify the differences between them. I then had to try to judge whether these differences were consequences of the huge age gap between the two, of differences in calibration, or of underlying differences introduced when recreating a 1971 design using 2019 technology. At the end of the exercise I made a video to discuss what I had found, and my first-born was taken hostage to ensure my silence in the ensuing months.

Shortly before Jean Michel Jarre inexplicably blurted out the news that Korg were indeed on the cusp of announcing a 'KARP' 2600, the first production 2600 FS in the UK together with its 3620 keyboard was delivered to me for testing. Carrying these to the studio, I was taken by how heavy they seemed. Yes, I know that I'm getting older, but both the keyboard and main unit seemed to be heavier than I remembered the originals to be, and so it proved, with the main cabinet weighing 2kg more than my 2600P and the keyboard proving to be 1kg chunkier than the original 3620. Nonetheless, the cosmetic accuracy of the recreations is remarkable, and very much to Korg's credit. There are small differences in the hardware — handles, clips and so on — but none of this matters; notwithstanding the extra weight, the 2600 FS and its 3620 look and feel just like their inspirations. This was a very good start.

Setting up the 2600 FS was a joy, not least because the lid now contains two boxes that hold the mains cable, the keyboard cable (which isn't compatible with vintage units), a large number of 3.5mm patch leads, and whatever else you might need. This may sound like a trivial improvement, but it's not. If you've ever gigged with a 2600 you'll know that you need to take an accessory case (or, more likely, a carrier bag) full of the bits'n'bobs you need in order to use it. With Korg's design you're much less likely to arrive at the venue without your cables!

Having placed the clone and the original synth next to one another, it was immediately apparent that — notwithstanding some extra features that I'll discuss shortly — Korg's main cabinet is an incredibly accurate recreation of the original. The chaps at the company also assure me that the electronics that lie behind the panel are accurate recreations of the original circuits, not using original components but modern equivalents that respond in the same way as those available nearly five decades ago. Consequently, the three oscillators offer the same range of waveforms and audio/LFO frequency options as before, as well as the same CV inputs. The same waveforms are pre-patched to the five-channel mixer that lies before the low-pass filter and these can (again as before) be overridden by patching. The same AC/DC-coupled ring modulator is provided, as is the noise generator that lies in the lower row of modules.

A quick glance at the filter section also suggests that it's identical to the original synth's, but this is where the first major enhancement is revealed. To the right of the frequency/resonance sliders, a small switch marked Type I/II has appeared. Just as a similar switch on Korg's Odysseys allows you to select any of the three filter types used in that synth's various revisions, this allows you to choose either the 4012 filter of 2600s manufactured between 1971 and 1975, or the 4072 filter that followed. (Why anyone would choose the 4072 is beyond me, but no doubt there will be some who find uses for it.) In both modes, the filter is resonant and will self-oscillate, and it tracks almost perfectly, as on the original.

Moving on, the contour section (which includes both ADSR and ASR contour generators as well as various Trigger/Gate facilities) again appears to be identical to that of the original. The VCA section has the same audio and control inputs as before, and it feeds the same output mixer and reverb sections as before. Outside of the main audio signal path, the same attention to detail has been lavished on the less often used modules — the external signal Pre-amplifier with its associated Envelope Follower, the Voltage Processors, the Sample & Hold section with its Trigger/Gate generator and Electronic Switch, and the internal speaker sections.

Like the ARP 3620 keyboard supplied with the ARP 2600 from 1975 onward, Korg's 3620 includes an LFO that's internally routed to generate vibrato, and offers multiple waveform outputs as well as an external modulation input. And, as before, there's a ±2 octave switch, a pitch-bend knob with a centre 'dead zone', portamento, single- and multi-triggering options for the main cabinet's ADSR contour generator, and two control inputs for foot pedals.

Unlike the original, the 3620 Keyboard now offers aftertouch.

Like its predecessor, the new 3620 also generates two pitch CVs. However, unlike the original (which only allowed you to tap the Upper CV from the keyboard itself) both CVs are transmitted to the main cabinet via the chunky connecting cable and they can then be tapped from its KBD CV‑1 and KBD CV‑2 sockets, the latter of which is a welcome addition. As before, CV‑1 is always derived from the lowest note that you play simultaneously with any others and is pre-patched to anything marked KBD CV on the main panel. Meanwhile, CV‑2 is derived from the highest simultaneous note that you play, which means that you can play the 2600 FS duophonically. To aid this, the new 3620 offers a second voice assign mode. Original mode does what you would expect if you know the 2600, holding both CVs at the most recent pitches until the last key is released. In contrast, the Normal mode allows you to play the synth like an Odyssey, with the Upper CV dropping to the Lower note when all other keys are released. You select between these modes by pressing the appropriate keys while switching the synth on, whereupon your choice will be remembered until reprogrammed.

The next improvement is even more welcome. Unlike the original 3620, which was neither velocity- nor pressure-sensitive, Korg's 3620 has a pressure sensor that generates an aftertouch CV with two destinations. Firstly, you can use it together with its associated depth knob to control the pitch modulation depth to create vibrato at the 3620's LFO rate. Secondly, you can tap the CV itself from the Aftertouch socket and direct it to other destinations to control aspects of the sound such as brightness and loudness. Unfortunately, due to a lack of patchable VCAs, you can't easily use it to control the levels of other signals and effects, which is a great shame.

Another welcome addition is an arpeggiator that offers five conventional modes: up, down, up/down, random and 'as played', the last of which is called Auto. However, there's no 'number of octaves' control; in every case the notes played are constrained to... well, the notes played. Furthermore, you can't adjust the Gate length, which is fixed at 50 percent. Nevertheless, it offers a Sequencer mode that allows you to record and replay monophonic sequences, with rests and ties programmed using the Momentary button in the portamento section. Once recorded, sequences are replayed at the LFO tempo without any niceties such as swing, but you can transpose them by latching the sequence and then playing keys to reassign the root note. Strangely, transposing a sequence also restarts it from its first note, which is an odd limitation. You should also be aware that sequences are remembered while the synth remains switched on, but they're lost when you switch it off.

If you look closely at the new 3620 you might notice that the addition of the Latch On/Off switch has meant sacrificing the Gate Repeat switch found on the original, and you might therefore surmise that there are some things that you can do with the original synth that you can't with its reincarnation. But don't worry — holding a single note with the arpeggiator running performs the same function, so all is well.