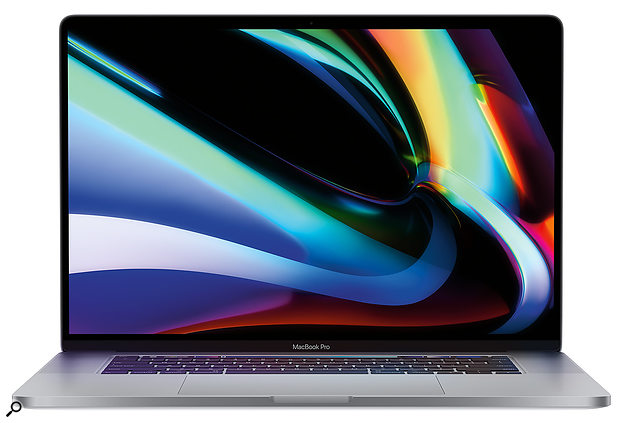 Apple's top-of-the-range laptop gains an extra inch and a lot more besides.

For years Apple's high-end laptops have been almost standard issue for music producers, audio pros and video editors. They are undeniably expensive, but are powerful enough to be the single computer most of us would need both in the studio and out-and-about.

The first generation of Retina display MacBook Pros was a high point in the evolution of the product, with great connectivity including Thunderbolt 2. The machines that superseded these in the last three years have met with a mixed reaction. Despite beefy processors and a beautiful slim design, they topped out at 16GB RAM, and rather inconveniently moved exclusively to USB‑C/Thunderbolt 3 ports. Then there was the keyboard, which proved unreliable and sacrificed smooth, quiet action for a super low profile. Opinion was divided by the Touch Bar, which replaced the function keys with a dynamic control strip. A revised model in mid-2019 upped the RAM limit and improved the keyboard, but by the end of the year this stood aside for the new new MacBook Pro, in which Apple appear to have given their pro users a large chunk of what they wanted.

The external design of the new MacBook Pro is much the same as the previous models, but with a footprint around a centimetre larger in each dimension. It does feel thicker and heavier, which at first seemed to push it across a psychological line from mid-size laptop to portable workstation. In reality, its vital statistics are almost identical to those first 15-inch Retina MacBook Pros, and just a millimetre thicker and 0.17kg heavier than my current machine.

The extra inch of screen seemed a subtle difference at first, but as time went on I felt the benefits more and more. It has the glorious dynamic tone technology that adjusts the colour depending on the ambient light. There's something like 7 percent more pixel space in each direction, which might not sound much but at its finest display scale the UI runs at a High DPI equivalent of 2048 x 1280. It doesn't feel too tiny at this setting either, while the finest setting on my 15-inch (1920) is on the edge of comfort. 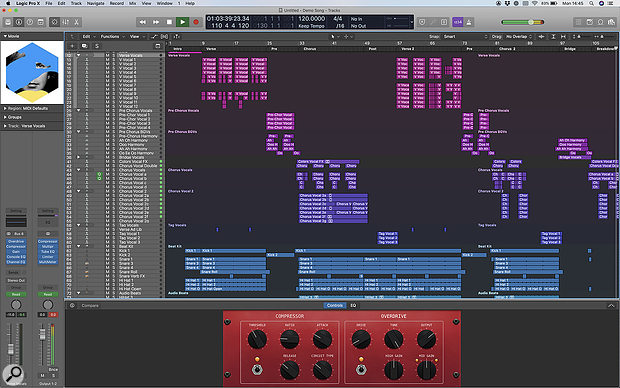 The glorious 16-inch display has more screen real estate than the standard–issue 24-inch HD displays still found in many studios.

So what about that keyboard? At first I was slightly underwhelmed by the difference, probably since the 2019 15-inch was already an improvement on what went before. It's still quite tappy: I've found the 15-inch infuriates anyone nearby trying to watch TV or sleep. But it certainly feels much better, with more positive travel and a scissor mechanism that feels more like Apple's desktop keyboards.

Apple have also gone back to an 'inverted T' layout for the cursor keys, something that apparently was much requested, although the difference eludes me. I'm absolutely on board, though, with the return of the physical Escape key, as well as the well–defined Touch ID pad/power button. These may seem small things, but make a real difference day to day, and again show that Apple are now listening and willing to pull back from ideas that aren't working. (See also: the Mac Pro.)

An upside of immersing yourself in the Apple ecosystem is how rapidly a new device feels like it's your own machine. (Side note: every time you say 'ecosystem' a sub-editor dies). Log in with your Apple ID, install your other cloud sync service(s) of choice and your life flows in. I've gone all-in on Apple Music and Photos, and all my music projects are on Dropbox, so there's little to do manually. Likewise, most DAWs and plug-in packages have manager apps that link with your account and can download and install your stuff. I installed Pro Tools, Logic Pro X, Ableton Live and Komplete/Maschine and let them pull in all my content from the ether.

To be fair, Windows has got much better at this stuff as well, as I found while setting up a new Surface Pro 7 around the same time as the MacBook. The only convenience I really miss on that device is the integration with photos and text messages from my phone.

The 16-inch MacBook comes with a minimum of a 6‑core i7 processor and 16GB RAM. There are few music mixing projects that are going to choke on this. But where you really need to know you've got sufficient grunt is when recording and monitoring through your DAW, playing processor–intensive virtual instruments, or in large multi-app scenarios. 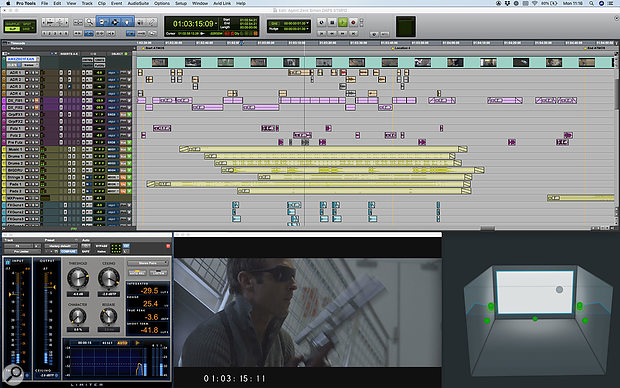 An 8‑core i9 and up to 64GB of Memory makes mixing in next-gen immersive formats like Atmos possible.

The first thing I did was throw the biggest project I have at it: a large surround mix with around 120 tracks, lots of plug-ins, and 128 channels of audio being piped internally from Pro Tools to Dolby's real-time Atmos rendering app. This scenario is a test mainly relevant to pros working in film or TV scoring, but it's an effective way to tax the processors, the GPU (with XDCAM video running in the timeline) and in particular the memory. With its 64GB of RAM, the review machine didn't blink. It did blow its fans a fair bit, though. This is basically unavoidable with a laptop system pushed to do this much work, but at least the fan noise is more of an airy whoosh than a mechanical whine.

If I was shopping for a single machine for all eventualities, I don't know of a better investment than this.

I also spent time in Logic, which never peaked over the 25 percent CPU usage mark when running the standard issue Beck demo on a 32–sample buffer — a touch better than on my 15-inch, which has the same processor. I used Ableton Live to test low-latency composition and performance workflows; and also Maschine, both stand-alone and inside Pro Tools. With USB audio interfaces I aim to live at a 128–sample buffer when playing with software instruments, and drop down to 64 if recording a live instrument. Everything ran smoothly with built-in sound, my Maschine MkIII interface, and Avid Thunderbolt interface.

It's not bullet-proof of course. At hair-thin buffers audio breaks up when mashing a few notes into Massive X or Reaktor Blocks, but you're getting multi‑core performance in a portable workstation that matches Apple's previous–generation Mac Pros.

One of the key attractions of the MacBook Pro for audio production is the set of four 40Gb Thunderbolt 3 ports, which also double as direct USB‑C connections. Most of the leading pro–audio interface brands (Focusrite Pro, Avid, UA, PreSonus, Apogee, etc.) have adopted this standard for their higher–end convertors and I/O devices. Latency via this connection can be much lower than USB, as low as traditional interface cards installed in tower-style PCs.

In fact, Thunderbolt 3 can carry up to four lanes of PCIe traffic, so Macs are commonly paired with PCIe host boxes from the likes of Sonnet and Magma. This allows the MacBook Pro to dock with the PCIe cards commonly found in pro studios, in particular Pro Tools HDX, UAD Accelerators, RME MADI cards and pro video boards.

The lack of any other standard connection can be tiresome at times, although a decent multi-port adaptor can take care of USB, external displays and Ethernet via just one of the Thunderbolt ports.

Having just upgraded to the 2019 15-inch MacBook Pro I was somewhat invested in the idea of not liking this new machine! I knew I was going to be jealous of the replacement keyboard, but I told myself I wouldn't really want to give up the thinner, lighter body. Unfortunately for my peace of mind, the beautiful screen on this laptop is addictive, and I'd happily work on it for extended periods in a studio environment. If you need more portability, or need to work on planes or trains, then there are more compact alternatives in Apple's portfolio. There are also excellent Windows-based machines that can be more affordable, or offer different features like hybrid touch interfaces. But if I was shopping for a single machine for all eventualities, I don't know of a better investment than this.

The on-board sound on MacBook Pros was already excellent, and my last two have regularly served as bedroom TVs as well as audio workstations. Even so, there's a step-change for the better in these new machines. There's a much extended low-end, but it's the imaging that's hard to believe. From a normal sitting position in front of the laptop, stereo music appears to emanate from a pair of virtual speakers about six inches outside of the edges of the computer. Some scary voodoo makes surround elements and Dolby Atmos objects genuinely sound like they are behind you at times. Yes, you do get the slightest of feelings that some psychoacoustics are being used as well as the machine's six on-board speakers, but it doesn't give you the willies or fatigue like some systems.

Before you worry that SOS is turning into a consumer lifestyle mag, I bring all this up because this is the first laptop where the on‑board sound could actually be useful for audio production. Not only did I enjoy noodling with song ideas in Live with just the laptop speakers, I think they could also serve as a useful reference for mix-checking, as they're on a par with Amazon Alexa devices or surround–capable soundbars.

For headphone monitoring, Apple are mercifully still including a good-old-fashioned 3.5mm mini-jack analogue port driven by a converter capable of 96kHz, 32-bit floating point operation. Like the previous model this appears to be a separate module and driver to the speaker system, requiring manual selection in some audio software rather than auto-switching.

We've all played that game on Apple's online store where you build a fantasy Mac with every upgrade option included. The review machine was exactly that: a fully maxed-out beast with an 8‑core i9 CPU, 64GB RAM, and a mouth-watering 8TB internal SSD. If you add AppleCare+ this takes you past the £$6k mark.

You don't need to spend this kind of money, though. The starter configuration (£2399$2399) is well spec'ed for most requirements, with a 512GB SSD and 16GB RAM. The sweet spot for me is the standard 8‑core with 32GB memory and a 2TB drive (£3519$3599). The bigger drive options are where you really start spending. But my internal drive has hovered at just over 1TB for the last few years, even with all my personal stuff and main samples and current projects on there. Larger sample libraries and recording projects can live on a USB‑C drive.

Apple have put the Pro back into the MacBook Pro.