I'm rather proud of my 2600P which, despite some scratchy faders and occasionally intermittent sockets, is still fully functional. Likewise, my 3620 (which was sold to me many years ago by a chap in the USA who prided himself on keeping everything mint and in perfect working order) remains fully functional, even though the ravages of time have led to a bit of unevenness and a fair amount of clattering. Happily, Korg's units display none of these issues. Furthermore, the extra weight of both pieces of the 2600 FS makes everything feel more robust — built up to a standard rather than down to a price. Given that the electronics are likely to be lighter than five decades ago, this suggests that the new cases and panels are made of tougher stuff, which is no bad thing. But none of these improvements will matter a jot if the synth doesn't sound great, or even if it does sound great but doesn't sound like an ARP 2600. So, what's the verdict?

When I tested the prototype against my 2600 last summer, I found that they could be forced to sound similar, but that the calibrations and responses of their various modules were different enough to make it hard to achieve the same musical results even though their underlying timbres were very similar. (Mind you, whether either synth was close to ARP's factory calibration is a question that's unlikely ever to be answered.) With perseverance, I was able to create and play patches that were all but identical, but there still seemed to be two underlying differences between them. Firstly, the signal path in my 2600 seemed a little brighter, resulting in sounds that were sparklier than those produced by the Korg. Secondly, the curves of the clone's contours were not quite the same and their maximum durations were a tad shorter. Given that the maximum lengths of the ARP 2600's attack, decay and release phases were pretty pathetic in the first place, this was not good. Patching brass sounds on the two synths revealed these differences clearly and, when I demonstrated the results to the chaps at Korg, they admitted that they were already aware of both issues.

So now let's ask again... nearly a year later, does the production version of the 2600 FS sound like my original ARP 2600? I think that the fairest answer is that it can be made to do so more easily than before, but it's still possible to tell which synth is which. Since Korg's recreations of the MS20 and Odyssey are all but indistinguishable from their inspirations, I started to hunt for reasons for this, and it was when I was viewing the oscillators' outputs on an oscilloscope that the penny dropped. While the underlying shapes of the waveforms generated by the two synths are all but identical, those generated by the original 2600 are far noisier that those of the clone. Having spotted this, I then noticed that there's more noise in both the audio and the control signal paths of the original, as well as more distortion in its mixers and VCAs. I wasn't surprised — the chances are that its 49-year-old power supply contributes significantly to this, and I suspect that time has taken a toll upon many other components too. But wherever the blame lies, the difference between the two synths was now obvious; the clone sounds smoother and it's much quieter. 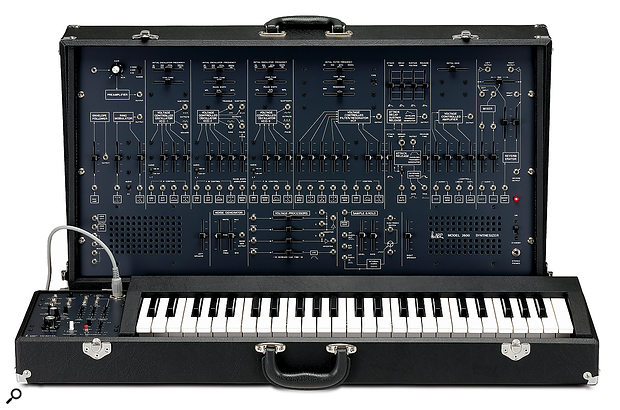 As before, the 2600 FS comes built into its own carry case. What's not shown here is the wheeled hard-shell case in which each unit ships. Not that you should ride it. Probably.

Another big improvement lies in the clone's reverb. Despite the 2600's reputation, there were aspects of it that were less than wonderful, and one of the most obvious of those was the reverb, which was (and remains) remarkably noisy. The reverb in the 2600 FS is much cleaner, with a richer tone and a longer decay. Again, this isn't surprising; ARP downgraded the 2600's reverb after the first few were built, so I suspect that the one in the clone is closer to the original specification than the one in my genuine 2600. Likewise, the elliptical speakers in the 2600 FS sound far better than the decrepit ones in my original synth, with better dynamics and a much wider bandwidth.

It was while investigating all of this that I discovered that last summer's comments regarding the contour generators have been addressed in the production unit: the clone's maximum contour times are now slightly longer than those of my 2600, which is another welcome improvement. And there are no doubt many other differences between the 2600 FS and my old beastie yet to be discovered; no-one is going to plumb the depths of a 2600 — let alone discover every nuance that divides a pair of them — in the length of time available to write a review. But do these small differences matter? I very much doubt it. Aficionados of analogue synths are a funny bunch who tend to become hung up on minutiae rather than looking at the big picture and, as I've written in the past, if it looks like a duck, walks like a duck and quacks like a duck... it's a duck. And so it is here. The 2600 FS looks like a 2600, it feels like a 2600, and it sounds like a 2600 — crisp and clear, and with that lovely twang that, for me, exemplifies the ARP sound.

If I have to find a deficiency (and I do) it lies in its MIDI specification. Very little MIDI information is sent — just Note On with a fixed velocity of 64, and Note Off — while received information is limited to Note On, Note Off and pitch-bend. I don't think that it would have been too much trouble to add the electronics to send pitch-bend, and I definitely would have wanted aftertouch to be sent and received. The lack of these means that expressive performances played on the 3620 can't be recorded and replayed correctly using MIDI.

Finally, I have to comment on all 2600s' lack of patchable VCAs. Like other semi-modular synths (and even modular synths whose owners are unable to resist filling available slots with extra oscillators and filters) the 2600 has always lacked enough of these. It's possible to repurpose the main audio VCA, but that's a horrible kludge and I think that, when the engineers at Korg were deciding what to add, they should have included one or more patchable VCAs. While not true to the original, they would have been a huge improvement.

Whether you're after lead synths, basses, orchestral emulations, percussion, rhythmic sounds or complex effects, the ARP 2600 remains an iconic instrument that's able to jump through hoops that very few other synths can and, for players who want to experiment with sound design as well as play some great sounds, it remains an absolute classic. Unfortunately, vintage 2600s are rare and expensive and, even if you can get your hands on one, the chances are that it will have scratchy faders, intermittent sockets, a noisy signal path, a noisy reverb, a tendency to generate VCA thumps, and a clattery keyboard that does little for your playing style. In contrast, the 2600 FS has beautifully smooth faders, sockets that were completely reliable throughout this review, a quiet signal path and a quiet reverb, no unwanted thumps, balanced outputs, a responsive keyboard with no unevenness or clattering, plus numerous well-chosen additions.

So why would I return to the original? In truth, I wouldn't. Unless you have a fully serviced example of the earliest Blue Marvins or Grey Meanies (see box) or one of Phil Cirocco's modified 2600s with his power supply rebuild, audio path upgrade, 4012 filter performance upgrade and VCA upgrade, I doubt that you will ever have heard a 2600 sound as sweet as this. In fact, the 2600 FS is what you always hoped that a 2600 would be, which is why I'm hugely relieved that Korg avoided the mistake of releasing a miniature travesty. It might be possible to make such an instrument sound similar, but the experience would be completely different. For taking the time and trouble to do it properly, thank you Korg. I love it.

It's a cliché but one that happens to be true for the ARP 2600: the older the model, the better it sounds. Later models had a constrained audio bandwidth following the introduction of the 4072 filter, they were hissy, they generated VCA thumps, and they exhibited slower slew times than earlier models. As you move back in time, you come to models with wider bandwidth, lower noise, better reverbs, less inclination to generate thumps, and faster response times. Unfortunately, the converse is true with regard to reliability. Your late-1970s ARP 2600 may not sound as good, but it's likely to be fully functional, which is not necessarily the case for the earliest models.

The table outlines the major revisions throughout its lifetime. It uses the best information that I have but I can't promise total accuracy, not least because ARP were notorious for introducing design changes outside of changes in the model number.

At A Glance: The New Stuff

The 2600 FS doesn't have a rear panel, but instead has two side panels that contain what you would expect to find on the back of a conventional synth.

The left-hand panel includes 5-pin MIDI In, Out and Thru sockets as well as MIDI In and Out via USB, and the associated Mode Selector switches determine the MIDI channel as well as allowing you to switch Auto shut-down on or off. The final socket on this side is for the 8-pin DIN cable that connects the keyboard to the main cabinet.

The right-hand panel is even sparser, with XLR sockets for the synth's balanced L/R outputs, and an IEC mains socket for its internal power supply. As on the original synth, a stereo headphones socket is found at the bottom right of the control panel.

If you've spent a large chunk of your life yearning after the hyper-expensive ARP 2600s that sometimes appear on eBay and VEMIA, you can now stop. The 2600 FS really is an ARP 2600 at a fraction of the price. I suspect that the value of my 2600P has just plummeted but, to be honest, I don't mind. Many more people will now have access to a thing of beauty, and that can't be bad.