Art Vista's new sampled piano won't break the bank or send you running out to buy a new hard drive - and it's still a sophisticated and versatile instrument.

Virtual Grand Piano presents a 1960s Steinway model B in a variety of guises — all of them accessed via this simple Native Instruments' Kontakt Player software interface. Yet despite its straightforward appearance, there's plenty of versatility on offer.With so many piano sound sources available to performers, writers and producers these days — everything from old hardware ROMplers to massive virtual instrument libraries that need a hard drive all to themselves — it's amazing just how many new ones keep coming out. Maybe that's not so surprising, though: piano sounds are a very personal thing, and it's unlikely you'd find one that would work perfectly for every genre or individual track you worked on.

Having said that, Art Vista's Virtual Grand Piano 2.0 does make some claim to be a 'universal' instrument, spanning classical and pop styles. The 5.5GB of samples it uses were derived from a 1960s Steinway B — an instrument roughly seven feet long, which has a sound that's noticeably more focused and less silky than a modern nine foot (and £100,000!) Model D Steinway. These samples are then delivered through Native Instruments' Kontakt Player 2, and can be customised with a range of parameters to suit your taste.

To run VGP you'll need Windows XP or Vista 32-bit running on a Pentium 4 or Athlon processor at 1.8GHz or better. Mac people will need OS 10.4 or newer and a G5 or Intel processor. And regardless of whether you're a follower of Mr Gates or Mr Jobs, you'll need at least 512MB RAM and 6GB of free hard drive space. VGP will run as a stand-alone application or, in a compatible host DAW, as a plug-in in VST, DXi 2.0, Audio Units or RTAS format.

Installation on my trusty Power Mac G5 running OS 10.5.2 was very straightforward. A custom option let me install only the plug-in formats I needed, and it was no problem to store the sample library itself separately from the stand-alone application and supporting files — on a separate drive, in fact. Authorisation is done via the NI Service Center application, which is an optional (but necessary) install. Whilst my own past experiences with NI authorisation processes have been pretty awful, I can honestly say that this time round it couldn't have been easier — quick and painless.

To get started with VGP you need to launch the Kontakt Player 2 application, or instantiate the corresponding plug-in in your DAW. By its nature, Kontakt Player is not a customised one-off, dedicated to individual sample libraries, but more of a hub that coordinates any compatible libraries in your system. This means that one or more instances of VGP can be loaded into Kontakt Player's 'rack', along with Garritan Personal Orchestra, First Call Horns or any other Kontakt instruments you own. 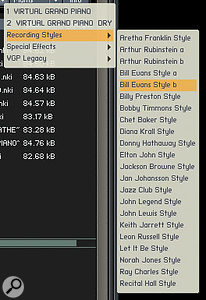 VGP offers a range of different preset sonic styles, some them inspired by and named after great players from across the decades.Assuming you have MIDI and audio set up, the default patch, Virtual Grand Piano, is loaded straight away. Ignoring everything else, I got stuck in using my semi-weighted Yamaha controller. First impressions? Very nice — a bright and clear tone, but with plenty of warmth and wood, and a beautifully graded response across the dynamic range. Pedal noise is well judged, but can be turned off if you wish. Virtual Grand 2 even felt good with my M-Audio synth-action controller.

With some more experimentation, though, a few quirks appear: the D two octaves above middle C is noisy at some velocities and its unisons aren't absolutely in tune. There's an unusual bloom, particularly in the tenor register, so that held chords seem to 'grow' a little a second or so into their sustain, almost like compressor pumping. Another D, two octaves below middle C, is not quite true, and, together with a few of its neighbours, seems less inclined to become loud and bright than all other notes. I couldn't find any firm information about whether there are separate samples for pedal-up and pedal-down notes; after a lot of careful listening, I think there are, but I wouldn't want to stake my life on it! If it's there, it's a subtle effect, and much less pronounced than on most acoustic pianos.

Delving into the user interface, you quickly discover there's quite a bit of flexibility on offer. In fact, after loading either of the two 'generic' patches — 'Virtual Grand Piano' or 'Virtual Grand Piano Dry' — you're prompted to choose appropriate settings from a series of pop-up menus. The first two, Keyboard and Loudspeakers, actually control velocity response and EQ, but a third menu, Playing Style, dials in potentially drastic changes in sound quality, helped along by an onboard compressor, reverb and exciter. These are all variations on a theme, of course, but they're effective and helpful starting points. More timbral variations are on offer via pre-configured presets named after individual artists, including Aretha Franklin (bright, ballsy, narrow), Bill Evans (middly, saturated) and Keith Jarrett (loose, distant and roomy). A bit gimmicky maybe, but again I found these useful, on the whole.

While the same tonal flexibility can be achieved 'manually', this can sometimes feel a bit hit and miss. Some of VGP's controls work in a downright weird way, with a bizarre logic to how some buttons appear and interact with each other. For example, when you start configuring surround output, the display of the parameters involved blitzes the usual buttons and menus, and you have to use a weird toggle pop-up to get them back. Not rocket science to figure out, but hardly elegant or intuitive.

Performance on my old G5 was OK. Running the stand-alone application I rarely exceeded 25 percent processor usage, even when playing 40 or more notes with a 9ms latency. In plug-in mode the CPU hit was broadly similar with both Live 7 and Digital Performer. I noticed a few little glitches and pops initially, but tweaking Kontakt Player's DFD (disk streaming) parameters got things 100 percent reliable, although at the expense of more RAM usage.

One Piano To Rule Them All?

Put simply, VGP is a really decent virtual piano. There are little quirks in the sound and user interface, for sure, but nothing that's a deal-breaker. The number of sound variations is impressive, but what's better still is the quality and versatility of the basic sample set. It really does do '50s jazz as well as '80s pop and, thanks to the 'dry' preset, would fit right into more modern 'squeaky-clean' rock and pop styles too. For classical styles VGP, like other sample-based virtual pianos, is most successful with big, chord-dominated material rather than super-precise figuration. For the latter, a modelled option like Pianoteq still has the edge in somehow 'gluing together' the final result. But for many production tasks VGP's rich, complex sustain will be preferable.

While VGP remains about the most affordable specialist piano virtual instrument, it goes up against some heavyweights not that much more expensive. Most similar in scope are the Best Service Galaxy Steinway 5.1, a 6.5GB library based on a modern Steinway D, EastWest's 2GB Bösendorfer 290 and Steinberg's 4GB The Grand 2. After that we're into the territory of the gargantuan multi-piano libraries like Native Instruments' Akoustik Piano and Synthogy Ivory. Also, don't overlook Modartt's Pianoteq — despite its non-sample-based, modelled approach, it's unusually playable.

With plenty of character and flexibility, Virtual Grand Piano is a useful and affordable piano virtual instrument. It's also a worthwhile upgrade from hardware ROMplers and most of the pianos bundled with mainstream software samplers.