Audio-Technica have added multiple polar patterns to one of their already successful designs, bringing increased versatility in the studio. 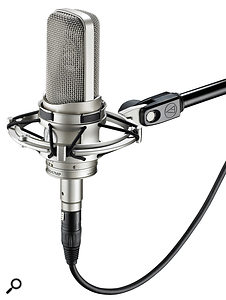 Regular readers may remember that we took a look at Audio‑Technica's AT4050 ST stereo condenser mic in the last issue of SOS, and this month I'm completing my look at the company's new AT4000‑series mics by putting the AT4047 MP through its paces.

The AT4047 MP is a multi‑pattern version of the AT4047 SV fixed‑cardioid mic, which has acquired a strong reputation, predominantly as a vocal mic, although it works well on a wide variety of musical sources. The MP provides selectable omnidirectional, cardioid, and figure‑of‑eight polar patterns, but is otherwise much the same as the SV, and maintains the same kind of 'vintage' sound that makes its sibling so popular and which is intended to resemble the character of early FET microphones. This character is achieved in part through its transformer‑coupled output and the tuning of its dual‑diaphragm capsule.

The capsule is a true DC‑polarised design, requiring a standard phantom power supply, from which it draws a modest 3.4mA. The total dynamic range is specified as 141dB, based on a maximum SPL (for one percent THD) of 155dB SPL (rising to 165 with the 10dB pad switched in) and a self-noise figure of 14dB(A). Sensitivity is given as 7.9mV/Pa, which is about 8dB less than its sibling. It's also 5dB noisier than the AT4047 SV, but the maximum SPL is 6dB higher.

Audio Technica's marketing machine claims that the AT4047 MP has exceptionally low self‑noise — but the current state of the art for a large‑diaphragm capsule is around 6dB(A), and www.microphone‑data.com currently lists 265 mics with self‑noise figures that are the same as or less than that for the AT4047 MP, including 16 other Audio‑Technica mics. So I think we can take that claim with the proverbial pinch of salt: the AT4047 MP is certainly a quiet and clean‑sounding mic, but not exceptionally so.

The AT4047 MP is quite a large beast (both larger and heavier than its sibling), measuring 188mm long and 53.4mm at the widest part of its waist. It weighs 524g, and roughly 35mm of the mic's total length is attributable to the XLR output connector, which extends as a stem below the body of the mic. The capsule is protected within an oversized, double‑layer, woven‑wire grille which has been designed to minimise coloration due to internal reflections. Three miniature, flush‑mounted slide switches around the base of the mic body allow one of the three available polar patterns to be selected, and introduce a low-frequency roll‑off (from 80Hz at 12dB per octave), and a 10dB attenuator.

The entire body and grille of the 4047MP have a matte‑silver finish, which is continued on the supplied low‑profile, elastic‑corded, cats‑cradle shockmount (AT449/SV). This has a US-standard, 5/8‑inch threaded stand fixing, and a 3/8‑inch European adaptor was included. Also supplied in the kit is a dust cover and a foam‑lined vinyl carrying case. In use, the shockmount proved secure and effective, and installing the mic was straightforward.

Audio-Technica AT4047 MP by Sound On Sound

The 4047MP's frequency response in cardioid mode is very similar to its sibling's throughout the mid range and high frequencies, being exceptionally flat between about 80Hz and 3kHz. A modest 2dB presence peak extends between three and 10kHz, and the response falls fairly rapidly above about 12kHz. At the low end there's a mild proximity‑effect bloom, but this is well controlled and only becomes excessive with very close working. When switching to omni and figure-of‑eight modes, the response gets a little duller or a little brighter, respectively, but always remains fundamentally clean and clear, and is never objectionable.

The figure‑of‑eight polar response exhibits deep side‑nulls with an even tonality, which only dulls slightly as the source moves around the edges. The omni pattern tends to flatten slightly at high frequencies, but this is a common side effect of dual‑diaphragm mics (caused by capsule shadowing), while the cardioid pattern starts to become slightly more hypercardioid at high frequencies — which is, again, a common side effect. Overall, the switchable patterns are accurate and reliable, and the versatility is a welcome advantage over the AT4047 SV model.

The claim of a vintage sound character is, perhaps, misleading. The transformer and FET impedance converter do lend the AT4047 MP a slightly less clinical character than some other AT 40‑series mics, but it wouldn't bear comparison with most valve mics if you're looking for that kind of vintage sound. Nevertheless, it does have a pleasant tonality, with a very well-judged blend of clarity and presence at the top end, and a nicely weighted bottom end. Proximity effect can be used to help balance the sound nicely, too, but if anything that characteristic seems less pronounced than that of the AT4050, the stereo version of which I reviewed last month. On vocals, I rarely felt the need for additional EQ to help bring a voice through in a mix: the presence peak seemed to provide all the clarity and diction enhancement that was required. The AT4047 MP also worked very well on acoustic guitar, grand piano and percussion tracks.

Overall, this is a very versatile and good‑sounding mic. The added flexibility of selectable polar patterns is offset slightly by the raised self‑noise figures when compared to the AT4047 SV, but I think most people will find the compromise more than acceptable. The greater tolerance to high SPLs is also an advantage when using the AT4047 MP for close instrumental duties. All in all, it's worthy and versatile microphone to add to the collection.

There's no shortage of multi‑pattern capacitor mics on the market: www.microphone.data.com lists over 160 with the same three polar‑pattern options as the AT4047 MP. Of these, the AKG C414B‑XLS is an obvious competitor (or the newer and almost identically performing C414 XLS, which uses an electret capsule), as is the Shure KSM44.

In the course of reviewing this mic, Hugh made some recordings to compare it with a similar well‑known condenser model. You can hear the results for yourself on the SOS web site at /sos/dec10/articles/at4047mpaudio.htm.

A multi‑pattern version of the popular AT4047 SV, this new microphone brings considerable versatility and flexibility to a well‑liked microphone, with negligible compromises in sound quality.