There's more to this variation on Audio‑Technica's flagship microphone than the simple addition of a second capsule...

The small switch fitted at the bottom of the AT4050 ST allows you to switch between the microphone's three different stereo configurations.

Audio‑Technica's 4000‑series is the company's premium range of studio microphones, and there have been two recent additions to that range, both of which are variations on existing designs. The AT4047MP is a switchable, multi‑pattern version of the 4047SV fixed‑cardioid mic that has acquired a strong reputation, predominantly as a vocal mic, although it works well on a wide variety of musical sources; and the AT4050 ST is a stereo version of the company's flagship AT4050. I'll be reviewing the AT4047 MP in these pages soon, but I decided first to take a closer look at the AT4050 ST.

The AT4050 has earned itself a strong following of enthusiastic users. Its three switchable polar patterns, high SPL capability, transformerless output and full, yet crisp sound character have made it a very popular all‑rounder workhorse microphone that delivers good results from a very wide variety of sources. The new AT4050 ST version extends the virtues of the original model by adding a second capsule within the same body, along with facilities to deliver a stereo output.

The AT4050 ST remains a side‑address capacitor microphone, but the original front‑facing, dual‑diaphragm capsule has been configured as a fixed cardioid, while a second dual‑diaphragm capsule has been mounted above it facing sideways, and is wired to deliver a figure‑of‑eight polar pattern in the standard Mid/Side arrangement. Internal circuitry performs the necessary matrix decoding to produce a conventional left‑right stereo output via a five‑pin XLR connector, and a switch selects either 90- or 127-degree stereo acceptance angles, or provides undecoded Mid/Side outputs directly. In the 90‑degree mode, a source 30 degrees to the right of the mic's centre axis will appear about a quarter right of centre in the stereo image, while switching to the 127‑degree mode will reproduce the same source closer to three‑quarters right in the image.

The AT4050 ST has a matt‑black finish and is supplied with the AT8449 shockmount and thread adaptor, a microphone dust cover and a foam‑lined carrying case. It's also provided with a five‑metre (16.5 feet) break‑out cable terminating in two three‑pin XLRs, which are colour‑coded grey and red for left and right (or Mid and Side) respectively. Both capsules are DC‑polarizsd types requiring 3.2mA from each channel of a standard phantom-power supply — and both channels must be powered.

The microphone weighs 517g (18.2oz), which is only seven grams more than the standard mono version, and measures 193mm (7.6 inches) long by 53mm (around two inches) at the maximum waist diameter. That makes it a mere 5mm longer than the standard version. Flush‑mounted slide switches around the base of the body provide the mode switching, 10dB pad and 80Hz, 12dB/octave roll‑off functions.

The sensitivity varies with output mode, from a nominal 7.9mV/Pa in the 90‑degree stereo mode, to 8.9mV/Pa when switched to 127 degrees, and 15.8mV/Pa for both the Mid and Side direct outputs. Self‑noise varies in a similar way, depending on mode, from 25dB(A) for 90‑degree stereo to 16dB(A) for 127‑degree stereo, and 15/17dB(A) for the direct Mid/Side outputs. Dynamic range is, therefore, of the order of 134dB for the direct Mid/Side outputs, falling to about 124dB for the 90‑degree stereo outputs. Overall frequency response is pretty flat for sources about 12 inches away, from 20Hz up to about 3kHz. Above that is a fairly pronounced and slightly peaky presence boost of about 6dB, extending to around 12kHz before rolling off fairly steeply. 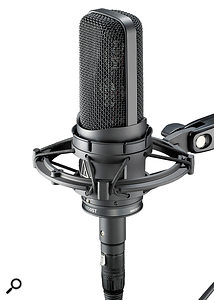 In use, I found the 4050ST to be a good‑sounding mic, although I detected a little 'leanness' at the bottom end and a little fierceness at the top. The fundamental reason for the weak low end is that, as a stereo mic, it will tend to be placed rather further away from the source than a normal mono spot mic would be, and the reduced proximity effect, combined with the laws of acoustics, means that it will tend to deliver a leaner sound character than might normally be desirable. While some gentle bass shelf EQ easily rectified the problem, I would have preferred a fuller bottom‑end response generally. The high‑end presence works to add clarity and sparkle in most cases, but can also make naturally bright sources sound a little screechy and harsh in some situations — and, being a stereo mic, it isn't always possible to lean it back or rotate it slightly to try to mellow the sound, as you can with mono mics. Of course, if you're looking for flexibility, it's worth pointing out that you could opt to use this as a mono mic, and it's perfectly capable in that role — although do note that the mic needs power supplying to both 'sides' in order to function.

The internally matrixed stereo modes work as expected, and although the 90‑degree mode looks noisier on paper, the fact that this would normally be used with a closer source position (to maintain a full stereo image) tends to counteract the effect. However, I used the mic mostly in its direct Mid/Side mode, which gave a very creditable performance. The close capsule alignment delivers extremely accurate stereo imaging, and the relatively compact body makes it easy to position. I found it worked particularly well as a drum overhead, and above tuned percussion such as vibraphones and xylophones. Its compact nature also makes it useful for stereo acoustic guitar tracks, particularly when using the Mid/Side outputs, which allow excellent versatility in post‑production, for fine‑tuning stereo width and imaging. On a string quartet, I found it a little too edgy, although the imaging was very impressive.

The AT4050 ST offers excellent stereo imaging and is a welcome addition to Audio Technica's 4000 series. Although based on the original AT4050, the 4050ST has slightly different characteristics, and it will inevitably be used in different ways — so the original 4050 still has a role, and will, no doubt, retain its disciples.

Most of the major microphone manufacturers have a Mid/Side stereo model in their range, but many are intended for broadcast applications rather than music. Potentially comparable models include the likes of AKG's C522MS and C426B, Beyerdynamic's MC742 and MC833, Neumann's SM69fet and USM69i, Pearl's MS2CL and DS60, and Shure's VP88. Some of these have fixed Mid and Side capsules, whereas others have rotatable capsules with adjustable polar patterns — which clearly affords more flexibility, but comes at a higher cost.

Building upon the sonic success of the standard AT4050, the new ST version expands its capabilities radically, with only modest performance compromises, to deliver an impressively detailed stereo sound‑stage from a single side‑address microphone body.