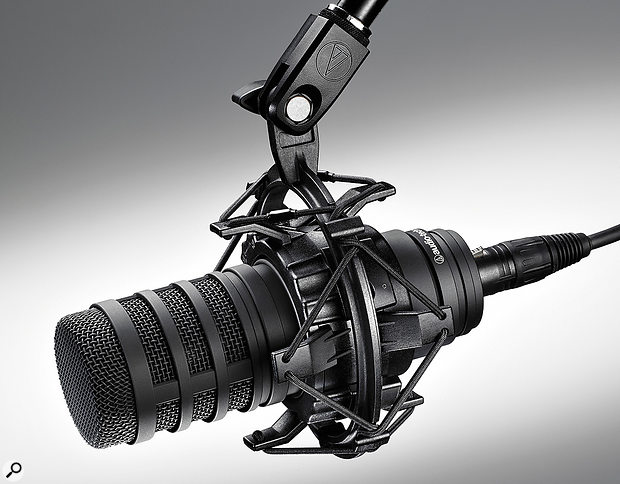 If you’re looking for a mic that excels at speech intelligibility, Audio-Technica’s new broadcast model may be just what you’re after.

A cursory examination of images of typical US commercial radio stations will reveal the near-ubiquity in that market of the Shure SM7B and the Electro-Voice RE20 for broadcast presenter mics. So when I received Audio-Technica’s new BP40 dynamic mic — the company’s first dedicated broadcast voice microphone — I immediately thought that its designers had been inspired by the iconic shape of the RE20, too. There is a marked similarity in the visual design of these two mics, both featuring a large-diameter body with a big, square-ended, cylindrical mesh grille, with the mesh sitting behind a chunky frame of spaced rings.

However, the RE20’s long body also incorporates a distinctive array of rear sound-entry ports (separated, again, by metal rings) for that model’s famous ‘Variable-D’ acoustic system, which is intended to mitigate the proximity effect. The BP40 lacks a comparable array, but its tough all-metal body is heavily machined with grooves of various widths, giving it something of the visual character of the RE20, at least. In fact, the widest of these grooves serves as the locating indentation for the supplied (AT8483) mounting clamp, and Audio-Technica state that these decorative channels were “inspired by the visual representation of a waveform” (although I might be rather worried to see such a flat-topped waveform at the output of a broadcast console!).

The mic is 164mm in length, with a diameter of 56mm, and it weighs 632g. Its large, end-addressed 37mm moving-coil capsule has a hypercardioid polar pattern, and it’s mounted on a flexible internal suspension to provide some mechanical shock isolation. A humbucking coil placed directly above the diaphragm rejects interference from external magnetic fields, too.

As this is a directional mic, sound needs to enter the rear of the capsule assembly as well as the front, of course, so the internal construction places the front diaphragm about halfway along the large dual-layer wire-mesh grille, roughly level with the front edge of the second metal ring. Positioned in front of the capsule, occupying almost the whole of the top portion of the grille, is a thick open-cell foam disc which provides a very effective pop screen.

A standard male XLR is provided at the base of the mic body for the output signal, while the Audio-Technica name and model number are printed around the bottom circumference of the mic body. I was expecting to find a serial number here as well, but there isn’t one, and it turns out that the serial number is actually found on a label on the internal support column directly below the capsule. What I did find, though, at the bottom of the mic body alongside the model number, is a miniature recessed slide switch that engages a high-pass filter. This has a gentle 6dB/octave slope from 100Hz, and is intended to compensate for proximity-effect bass boost rather than to serve as a rumble filter.

Although the mic is supplied as standard in a padded, zipped leatherette bag, with a removable mounting ring-clamp, I was also provided with the optional AT8484 cat’s-cradle shockmount (pictured) for this review. The standard ring-mount locates in the largest groove near the base of the mic body, and attaches to a mic stand or angle-poise mount using a pivoting hub with a standard 5/8-inch thread (a 3/8-inch adaptor is included). Removing the clamp mount is not something you would want to do often, as it requires the complete — and I really do mean complete — disassembly of the mount, which takes some time and care! After removing the clamp I was left with the clamp ring, the hub, a wingnut, a metal washer, a coiled spring, a brass ferrule, two plastic washers and a bolt! The instructions supplied with the optional cat’s-cradle shockmount advise the reassembly of this removed mounting clamp “so no pieces are lost” — always a good idea!

Fitting or removing the mic in or from the cat’s-cradle shockmount is, thankfully, a rather easier task. The all-plastic shockmount suspends an inner mounting carrier from two elastic loops zig-zagging from vertical arms on the inner ring to pegs on the outer ring. The pivoting bracket attached to this outer suspension ring has a 5/8-inch mounting thread as standard, but was, again, supplied with a 3/8-inch converter.

To install the mic, a rotating section at the top of the inner mount is first turned counter-clockwise to release pressure on four captive, white plastic balls, allowing them to move outwards. The mics can then be lowered into place inside the mount, whereupon the top rotating section is turned clockwise, forcing the four balls inwards to locate in the wide groove of the mic body, effectively trapping the mic within the mount. The rotating ring latches positively into place to secure the mic safely, although the plastic balls do rattle very audibly if the mount is shaken or knocked, which I found rather disturbing. The elastic suspension loops also seemed to support the mic rather more stiffly than I was expecting, and I suspect the shock isolation is not as effective at very low frequencies as it could be.

Looking at the published specifications, the BP40 has a sensitivity of 3.9mV/Pa, which is about 6dB more than a Shure SM58, and the output impedance is unusually high at 450Ω — so would theoretically benefit from being partnered with preamps having an input impedance of 5kΩ or so. Although the marketing materials suggest the BP40 has a “rich, natural, condenser-like sound”, the frequency response is given as 50Hz-16kHz, with the range limits appearing to be the -10dB points (relative to the sensitivity at 1kHz, and with the source 12 inches or more away). Moving closer — which would represent a more typical use given its intended application — inevitably results in a low-end boost through the proximity effect, and the high-pass filter may then be required to restore a more natural balance. This filter introduces about 10dB of attenuation at 50Hz.

Below 1kHz, the response is broadly flat and smooth down to 100Hz, albeit with a mild and broad lower-mid recession of a decibel or two. Above 1kHz, though, the response rises progressively to a prominent peak of +10dB at 4kHz, after which a series of gradually diminishing HF peaks return the sensitivity back unity by 15kHz. The high end rolls off steeply above that point, reaching -20dB at 20kHz. As a result, the BP40 has a strongly emphasised upper mid-range region, giving spoken voice a lot of clarity and presence — which is typically what is desired in a commercial style of radio broadcasting or podcasting.

Most presenter broadcaster mics tend to have a relatively tight polar pattern, and the BP40 is no exception. The nominally hypercardioid pattern is well controlled across most of the frequency range, with stable rear nulls, and the pattern only really opens out around the frequency range of that high 4kHz presence peak. The rear tail is a good 15dB less sensitive than the on-axis response, and the deep nulls at 120 and 240 degrees offer at least 25dB of rejection: all very tidy and effective.

Given Audio-Technica’s description of the BP40 as “condenser-like”, I reached for a classic moving-coil mic in my own collection to which I would give that exact same attribution: the AKG D224E ‘two-way’ microphone. This pinnacle of ’70s audio engineering employs separate high- and low-frequency capsules, their outputs being combined with a passive crossover much like a two-way loudspeaker in reverse. Its better-known sibling, the D202, was a firm favourite for broadcasters in the UK and Europe around that time, so it seems a very aposite reference comparator for the BP40.

Not surprisingly, the high presence peak of the BP40 really does make speech cut through, with quite a hyped sense of diction, clarity and — that word again — presence! The peak is so strong that I can envisage some presenters’ voices not getting on with the BP40 at all. However, where there is a desire for a bright, crisp, clear sound — and especially if the signal chain includes a lot of compression processing — the BP40 delivers exactly what is required: a very modern, punchy and highly intelligible voice presentation.

In comparison to other modern ‘broadcast announcer’ mics, the BP40 sounds much more similar to the Electro-Voice RE320 than that model’s more expensive sibling, the RE20. The former has a similarly strong presence peak, whereas the latter is much more linear, and more like the smooth-sounding AKG D224E. It seems the jury is out as to which is the more desirable or appropriate characteristic: the Rode Broadcaster mic takes a flat-response approach, while the Heil PR40 has a pronounced presence peak, and the Shure SM7B hedges its bets, as it can deliver either tonality with the flick of a presence-boost switch!

The BP40 is certainly an effective mic for capturing voice, free from plosive popping and with a well-controlled polar pattern that will help to reject ambient studio noises. However, its conspicuous presence boost will inevitably divide opinion: some will love its strong, bright, crisp articulation, while others might prefer a more laid-back and neutral style — a decision that, I suspect, will also vary greatly with the broadcaster’s output genre and style.

Cost wise, there isn’t much to choose between the mic reviewed here and the Rode Podcaster, or the Heil PR40, but the Electro-Voice RE20 and Shure SM7B cost about 20 percent more, while the EV RE320 is around 30 percent less.

Another cost-effective and well-engineered mic from Audio Technica, this is the company’s first to be aimed squarely at the broadcast presenter.