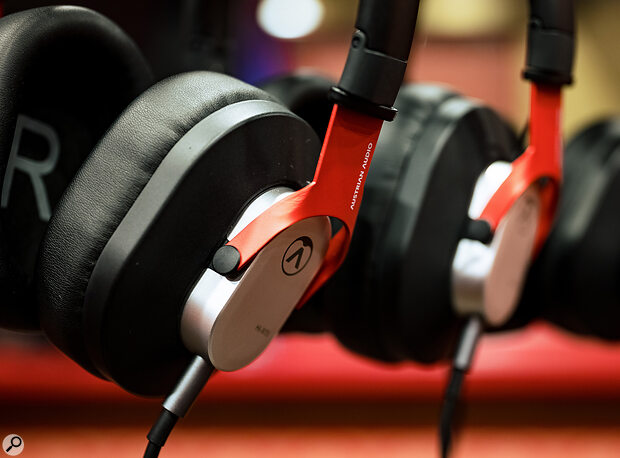 One effective way of establishing a new brand is to start at the top. Begin by launching a premium product range, and you entrench a perception that the brand stands for quality. With a bit of luck, this perception will then rub off on more affordable mass‑market products further down the line.

This seems to be a strategy that Austrian Audio have pursued, and with considerable success. Their OC‑series microphones have won acclaim from professional engineers and have proved able to hold their own against strong competition from established names; likewise, until now, their Hi‑X headphones have been targeted at the upper end of the project‑studio market. With the new Hi‑X15 model, however, Austrian Audio have made available their ‘high excursion’ driver at a much more affordable price.

Physically speaking, there’s a family resemblance to earlier Hi‑X models, especially in the jaunty angle at which the earcups sit relative to the headband. At a more detailed level, however, pretty much everything is different. The new model uses a much narrower headband, which in turn means different hinge and gimbal designs. There’s perhaps a bit more plastic and certainly more colour in the Hi‑X15s, but they don’t feel cheap or uncomfortable. The earcups rotate freely in both the vertical and the ‘fore and aft’ plane, the headband is nicely padded and the overall weight is a welcome 50g or so lighter than that of the Hi‑X50s, whilst offering a perfectly decent level of isolation. The new design also retains the additional hinges that allow the earcups to be folded right into the headband for compact and safe transportation. At this price it’s no surprise that you don’t get a proper case, but a soft bag is supplied.

Another welcome design feature that’s carried over from the more expensive models is a detachable cable, which attaches to the left earcup using a twist‑lock mini‑jack. Less welcome is the fact that said cable is only 1.4m long: fine for mixing on a laptop, but not really long enough for general studio use. (Austrian Audio have also launched a variant called the Hi‑X25, which adds Bluetooth wireless connectivity to the Hi‑X15.)

You’ll have no trouble getting loud working levels from them.

The Hi‑X15s are 5dB or so less sensitive than the Hi‑X50s, but given that they still manage a figure of 113dBSPL/V and that their nominal impedance is only 25Ω, you’ll have no trouble getting loud working levels from them. In most respects, their specifications are similar to those of the more expensive model, but it’s notable that no THD figure is listed for the Hi‑X15s.

The outward family resemblance that’s visible in the design of the two models is also apparent in their sound. The existing Hi‑X models all have a pleasant but noticeably ‘scooped’ tonality to my ears, which slightly foregrounds the bass and the upper midrange at the expense of the bit in between. The Hi‑X15s offer a less refined take on the same sound, with a low end that is sometimes borderline bloated and a really quite aggressive treble boost. I think it’s still a tonality you could learn and mentally adjust for, but it certainly isn’t neutral, and could become fatiguing during the course of a long session.

The Hi‑X15s perhaps wouldn’t be my first choice as mixing headphones — but at the low price, that’s hardly surprising. As long as you have a few cable extenders to hand, these have plenty of other roles to play, and I think they’d be an excellent, affordable choice for general‑purpose studio headphones.