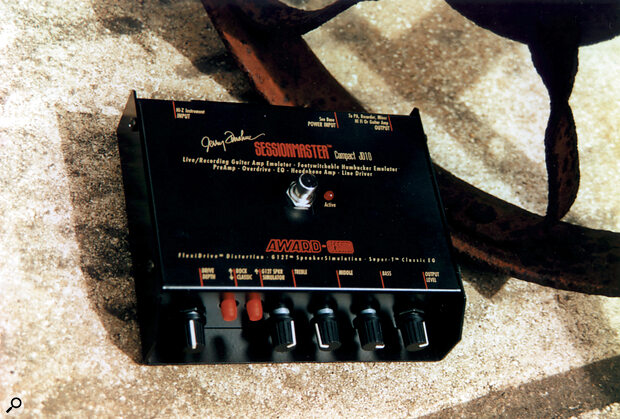 The Sessionmaster JD10 recording preamp provides the perfect excuse for guitar practice at the magazine's expense!

You may remember the original rackmount Sessionmaster recording preamp (reviewed by Dave Lockwood in SOS February 1992) — it was all‑analogue, there was no programmability, and everything was controlled by knobs — just the way guitar players like it. MIDI didn't even get a look in!

The Sessionmaster JD10 sticks closely to this recipe for success, but this time the unit is packaged in a pedal format and features newly voiced circuitry designed in conjunction with top guitarist Jerry Donahue. The JD10 may be powered from a 9V battery or from any AC or DC power adaptor, of any polarity rated at between 9 and 30V DC or 6 and 20V AC.

Housed within the tough steel case is a single‑channel guitar preamp complete with traditional, passive three‑band EQ, and overdrive depth and output gain controls. Nothing too revolutionary there — but things get more interesting when you check out the Rock/Classic button. In the Classic position, the Drive Depth control can be turned down to give a natural clean tone, or advanced to give a vintage blues tone, and the blues tone is one of the great strengths of this little box. Many of the more elaborate guitar preamps fall flat on their face when trying to emulate those 'inbetween', subtly‑overdriven amp sounds, but the Sessionmaster JD10 comes very close to the real thing, and lets the original tone of the guitar shine through.

Switch to Rock and the tones range from R&B raunch and '70s rock through to the heavily‑saturated overdrive sounds that have dominated the '90s. Hitting the footswitch puts the unit into bypass mode, but rather than simply routing the input directly to the output, an impedance buffer is left in circuit which means that you can drive long leads without losing tone. In the studio, this also allows you to DI your guitar for a super clean sound without losing all the edge.

For recording overdrive sounds, the Speaker Simulator button brings in a filter which takes out the high‑frequency harmonics and adds extra bite at around 3kHz. This works well in practice, but may also be used in conjunction with a guitar amp to thicken up the sound of single coil pickups to make them sound more like humbuckers.

Unlike many overdrive units, this one is very quiet. You still get hum from your guitar pickups if you sit too close to a source of interference, but the level of hiss is extremely low, even at quite high overdrive gain settings. It's also possible to coax a much wider tonal range out of this little box than you might at first think possible — the secret is to experiment with very small changes in the control positions rather than trying to crank everything fully up or fully down.

The bottom line is that the Sessionmaster JD10 is a very simple‑to‑use, no‑fuss guitar preamp that can be used both live and in the studio for just about any application where programmability or channel switching is not required. Used with an amp, you don't really need channel switching because you can use the amp's tone as one sound with the Sessionmaster JD10 in bypass mode, and then create your second sound with the unit turned on. And in the studio, if you want two guitar sounds in one track, it's usually just as easy to record them separately.

All this little box needs is a touch of reverb to bring it alive, and as mentioned earlier, its greatest strength is its ability to recreate subtly distorted, classic amp sounds. I feel it's a definite improvement on the original Sessionmaster — and that was pretty good!

A neatly‑designed product that will earn its keep both on stage and in the studio.