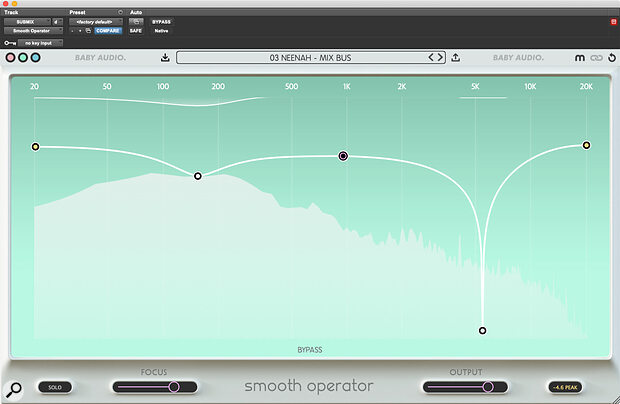 Smooth Operator’s user interface displays an EQ‑like curve overlaid on an animated spectral representation of your source. A single Focus slider does something roughly akin to Soothe’s Sharpness control: at high Focus values, any attenuation that’s applied is concentrated on narrow resonant peaks, but turn it down to zero, and those same peaks will trigger broadband gain reduction. The rest of the control set is condensed to five nodes on the ‘EQ’ curve. You interact with the two white nodes in the same way as you would bands on a parametric EQ, with each having a frequency centre, a gain or ‘offset’ value, and a bandwidth that can be set with the mouse scroll wheel. The outer green bands are fixed at either end of the frequency spectrum, supplying only an offset parameter.

The red node in the centre is a global threshold control: dragging it up and down moves the entire curve. Adding an offset to one of the white or green bands adjusts the threshold in that frequency region relative to the global threshold. As a simple example, you could perform de‑essing by keeping the global threshold high, but using one of the white bands to create a deep offset somewhere in the 5kHz region. Depending on the setting of the Focus control, sibilants would then trigger either full‑band ducking, or attenuation focused only on those frequencies. There are no controls over the time constants, and the rather under‑sized output level slider can make it hard to match the gain of the processed and unprocessed sounds.

One feature that takes some getting used to is the interaction between the Threshold and Offset nodes. The former doesn’t just move up and down to control the overall amount of processing. It also travels left and right between the two white Offset nodes, and can have quite a profound effect on the shape of the resulting curve. I didn’t always find this terribly intuitive, but it does allow some complex shapes to be generated that wouldn’t otherwise be possible.

You can generate some really interesting and unusual ‘compression as an effect’ sounds on drum loops.

Although it’s not as controllable as Soothe, and its fixed attack and release times aren’t always fast enough for corrective work, Smooth Operator is very effective at taming harshness. Badly recorded, scratchy violins are a good test case, and I was impressed by its ability to reduce the screech without dulling the overall sound. It also works well as a mix bus processor, and in roles where I’d often use a multiband compressor, such as controlling proximity effect on a vocal, or enlivening a drum loop that’s just a bit too lo‑fi.

In the creative sphere, you can generate some really interesting and unusual ‘compression as an effect’ sounds on drum loops, for example by keeping the Threshold line high in the midrange and applying huge offsets in the bass and treble. The external side‑chain option also means that you can replicate the effect of a plug‑in like Wavesfactory’s TrackSpacer, ducking frequencies in one track to make space for another. You could almost mix an entire track using Smooth Operator in place of conventional EQ and dynamics. It’s easy to use, sounds natural and offers something new to freshen up tired plug‑in folders at a friendly price.

An interesting hybrid of resonance suppression and multiband dynamics, optimised for creative tone‑shaping at the mix.