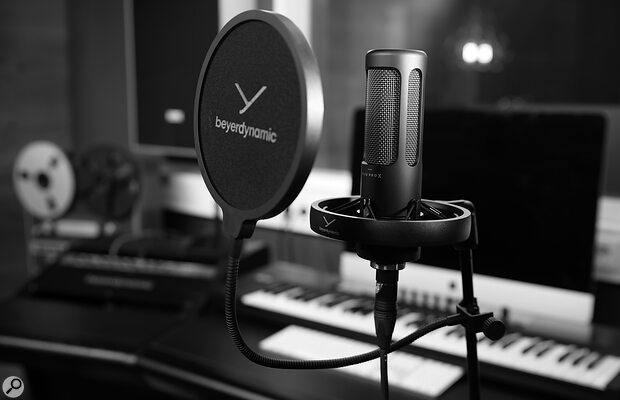 Beyerdynamic’s new studio mics are as classy as they are versatile.

For those unfamiliar with the brand, Beyerdynamic started life in Berlin in 1924, then moved to Heilbronn in Germany after the Second World War, before adding a US subsidiary. The company originally built loudspeakers, but by the 1930s had designed and manufactured the first ever set of dynamic headphones. Their new Pro X series, launched in 2021, currently comprises two new headphone designs (which we’ll also be reviewing), as well as two microphones, one dynamic and one capacitor model.

Starting with the latter, the M90 Pro X is an elegant, cardioid‑pattern, large‑diaphragm capacitor microphone priced to appeal to the home studio operator. Its 34mm capsule is a true capacitor (ie. externally polarised) design residing in a suave, matte‑black, tubular body and protected by a single‑layer mesh screen. Beyerdynamic are promoting the M90 Pro X as an all‑rounder, suitable for use on vocals, drums and acoustic instruments such as guitar, strings or piano.

Requiring a phantom power supply of between 20 and 52 Volts, the microphone is specified with a frequency response of 20Hz to 20kHz, though the character of a microphone is often related to the subtle ways that the frequency response varies, especially in the upper‑mid or ‘presence’ region of the spectrum. Consulting the frequency plot shows the usual proximity bass lift when used close up, while at the high end there’s a broad presence bump starting at around 4kHz which then tails off gradually above 10kHz. The overall shape of the curve suggests that the quoted frequency response allows for a ±5dB deviation, which is necessary to encompass the presence boost region. The accompanying polar plot shows a tight cardioid pattern with a slight rear‑facing lobe at higher frequencies, as you’d expect from a hypercardioid microphone.

With a nominal impedance of 180Ω, the maximum SPL (at 1kHz) is specified as a very loud 133dB, which may explain why the designers didn’t feel it necessary to add a pad switch. The self‑noise is creditably low at 5.6dB A‑weighted (equating to a signal‑to‑noise ratio of 88.4dB relative to 1Pa), while the open circuit sensitivity at 1kHz (where 0dB = 1V/Pa) is 36.3mV/Pa. The capsule is mounted on a resilient structure to minimise vibration‑borne noise. There’s no low‑cut switch so if you need to eliminate the extreme lows, you’ll need to use your preamp’s filter if it has one, otherwise you’ll need to EQ when mixing. For those who worry about such things, the overall length is 197mm, the diameter 52mm, and weight is 296g.

The balanced XLR connector is attached directly to the transformerless circuit board, which is populated in the main by surface‑mount components, though there are some discrete parts on there too. A bespoke elastic cradle shockmount is included, along with a soft storage pouch for the mic, and a pop filter with an integral gooseneck.

When used on vocals, ‘working’ the mic distance allows you to effectively control the amount of low end you capture — moving closer brings the proximity effect into play more strongly to lift the bass. When working close up, this is balanced by that broad presence peak, yielding a ‘smile’ curve that boosts both the lows and highs, adding weight and clarity to the sound. In comparison with some of my other similarly priced capacitor mics, I found a lot of similarities, the main differences being in that all‑important presence region, which is why you should always choose a vocal mic based on how it sounds on the voice you plan to use it on, and not just on how the spec sheet looks. The fact that the presence peak is relatively broad here helps keep the highs sounding smooth as narrow presence humps can sometimes sound peaky.

Testing the mic on acoustic guitar, I quickly achieved a very usable sound, though I did need to use a little EQ to tame the 200Hz region for my particular instrument and choice of mic position. In this application the overall character comes over as detailed, and without the nasal honk that a narrower presence peak, especially one lower down in the spectrum, often imparts. Again then it seems that the broad presence peak works in its favour.

To summarise, the M90 Pro X is a very capable mic given its attractive pricing. It is very nicely engineered, it has a low noise floor and, as the manufacturer suggests, it is sonically adaptable, which is important if you can only afford one or two mics.

The overall character comes over as detailed, and without the nasal honk that a narrower presence peak, especially one lower down in the spectrum, often imparts...

The dynamic M70 Pro X is similarly styled to the M90 Pro X capacitor model, but is slightly longer at 185mm, and also a little heavier, at 320g. It features eight wide vertical slots protected by mesh, with the end of the mic being protected by the same mesh. Unlike the M90 Pro X, the M70 Pro X has its capsule facing the top of the body, rather than the side — this is an ‘end‑fire’ microphone. Disassembly reveals that all components, including the capsule, are fixed to the lower body section, so the majority of the mic body is essentially the ‘basket’ part of the microphone. 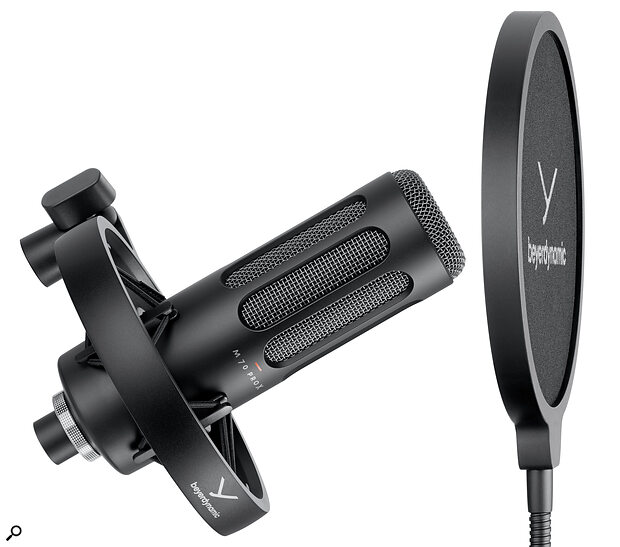 Unlike the capacitor M90 Pro X, its dynamic sibling the M70 Pro X is an end‑fire microphone.

The M70 Pro X has a 40Hz to 18kHz response when used at one metre or more from the source, though this changes to a 25Hz to 18kHz response when used up close, again due to the proximity effect. The M70 Pro X is designed primarily for recording speech and vocals, though many dynamic vocal mics have secondary applications including the likes of bass and guitar speaker cabinets, while the lack of any LF roll‑off here means it should also work well on kick drums. Its internal resilient suspension reduces the effects of mechanical vibration, while the included gooseneck‑mounted pop filter suppresses plosive popping sounds. The kit also includes the same elastic suspension mount as provided with the M90 Pro X capacitor model.

As with many microphones designed for use with voice, the frequency response is by no means flat once you get above 1kHz, and because this mic has a cardioid pickup pattern, there’s a significant low‑end proximity boost when used close up. There are two distinct peaks to the presence boost, one at 4kHz and one at 8kHz, with the response falling away gradually above that. The sensitivity is quoted as 1.8mV/Pa.

My first test with this mic was to use it to record Technical Editor Hugh Robjohns when we were putting together a podcast. In this role it provided excellent vocal clarity, with a supportive low end, and required little to no EQ at the mixing stage other than rolling off the extreme lows. The mic can also work well on guitar cabinets, especially if you need a biting rock tone — in fact it can stand in for any of the applications for which you might use something like an SM57, but offers a little more high‑end extension than Shure’s classic. Percussion also fared well when recorded via the M70 Pro X, so although it is intended as a vocal mic, it’s fair to say that it is a capable, general‑purpose microphone.

Summing up then, both of these mics are classy, versatile affairs that should find many uses in the studio. They’re keenly priced too, especially given the included quality cradle and pop screen.

Two professional‑quality microphones that should suit many different sources. For recording podcasts and the like, the M70 Pro X does an excellent job, though the M90 Pro X might be the better option if you also need to record instruments.