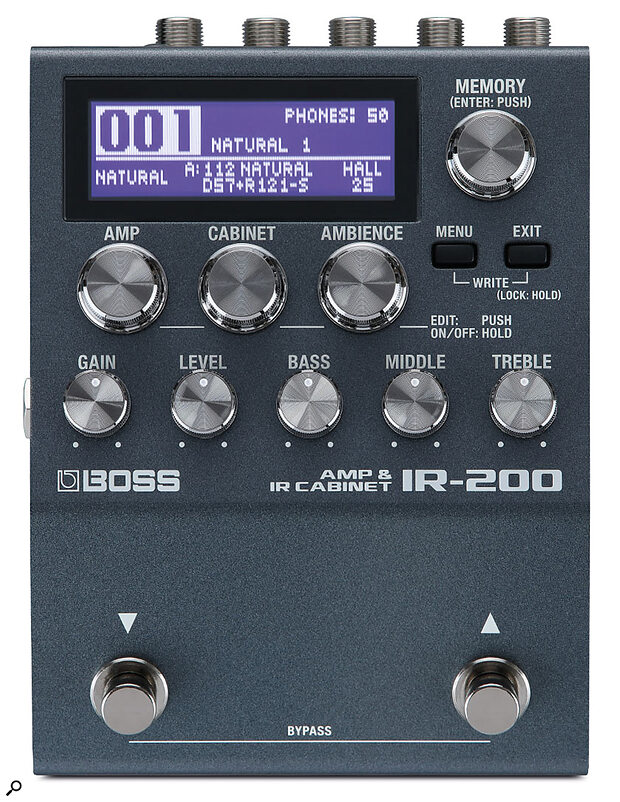 The IR‑200 is a compact, DSP‑powered pedal that pairs an amp simulator with a speaker cabinet impulse‑response engine. Conceptually this is rather different from the company’s GT‑1000 or GT‑1000 Core, both of which integrate both amp and speaker modelling with a multi‑effects collection and comprehensive routing. The target market, then, is the sort of player who either doesn’t use additional effects or prefers to use discrete pedals rather than all‑in‑one solutions. It’s also ideal for studio use, though, a scenario in which plug‑ins can supply any additional effects you require. As well as the speaker and cab, there’s some ambience processing built in, with a choice of three types, so the resulting sound never seems too dry — even when you’re not using additional effects. Power comes from an included 9V DC adaptor.

On the technical side, the IR‑200’s credentials are suitably impressive, with 32‑bit A‑D/D‑A conversion, 32‑bit floating‑point processing, and a 96kHz sample rate. Handling the processing are two custom DSPs. There are 128 mono or 64 stereo user IR slots, and these accept (via a free IR Loader app) mono/stereo WAV format impulse response files with a maximum time of 500ms. They can be 44.1, 48 or 96 kHz, and 16‑ or 24‑bit linear or 32‑bit floating point. While it’s great that you can ‘roll your own’, there’s also a very generous selection of speaker‑cab‑plus‑mic configurations to get you started. With the 144 Boss IRs and 10 from Celestion Digital, I can’t imagine many cabinet types that aren’t covered here.

In addition to a mono input jack and a stereo output (on two separate jacks), there’s a stereo mini‑jack aux input and a headphone output, which includes processing to provide a more immersive sound. So as well as having a low‑latency feed over headphones, you can also play along to music from a mobile device. A driver for Mac or Windows also allows for direct USB recording or loopback to the DAW for reamping with routing to the ins and outs selectable via the master settings.

If going large is your thing, the pedal can run two different IRs at once to produce either a mono or a stereo output.

Your choice of cabinet emulation can be used with one of eight guitar amps: Clean, Tweed, Class A , Vintage and Modern high‑gain as well as three bass amp types. Each amp has controls for gain, bass, mid and treble, plus a noise suppressor, which is very useful in cleaning up high‑gain sounds or for taming the hum from single‑coil pickups. The default speaker cabinets are appropriate for the amplifier type but you can switch to any you like.

If going large is your thing, you’ll appreciate the pedal’s ability to run two IRs at once, to produce either a mono or a stereo output. I mentioned the 128 memories for storing user setups, and that’s way more than I can imagine needing, particularly since, in addition to the amp and IR settings, there are two global EQs, with a choice of parametric or graphic types to help tailor the final sound.

The aux input and headphones allow you to play along to an external source — but this pedal can also be used over USB with a computer. 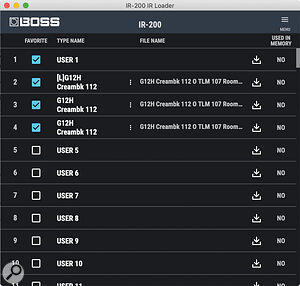 The free IR loader makes it easy to get your own IRs, in a range of PCM WAV formats, onto the pedal.To facilitate integration into a pedalboard, there’s an effects loop with a mono send and a mono/stereo return that comes after the amplifier section. This can be switched to pre‑cab emulation or post‑EQ. The Micro USB port is used for firmware upgrades, communication with the IR Loader and for the audio interface, which shows up as a four‑input, four‑output device for Mac/Windows, and basic stereo use with iOS devices is also supported. External control is available via a jack that can take an expression pedal or two footswitches, while MIDI In and Out is also provided on TRS mini‑jacks, which means adaptor cables are required if you need to connect to conventional five‑pin MIDI devices. These MIDI connections make for easy integration with the Boss ES‑8 and ES‑5 loop‑switchers.

My first impression was promising: it’s all so easy. The lower row of knobs is set up like a guitar amp panel, with Gain, Bass, Middle, Treble and Level controls, while the three knobs below the LCD window are used to select Amp, Cabinet and Ambience types. A Memory turn‑and‑press encoder selects patches and serves as an Enter button with two buttons below for accessing Menu and Exit. Pressing both together functions as Write. The factory settings give a good idea of the range of amp/speaker sounds that can be coaxed from the pedal, and it’s very easy to swap out cabinets, amp types and ambience types as well as tweaking the gain and EQ. 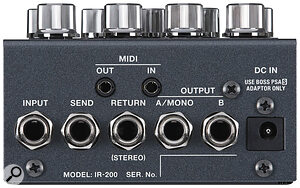 The inbuilt effects loop is a nice touch that makes integration into your pedalboard easy.Digging deeper, both the sound and playing feel of the amp models is convincingly realistic, with lively cleans at one end of the spectrum, via some gentle bluesy overdrive to full‑on distortion and modern, hard‑edged rock at the other. The ambience options really help to take away that sense of ‘sterility’ that often afflicts DI’d guitar sounds and, unlike with many modelling solutions, those elusive ‘almost clean’ sounds come over really strongly.

Switching cabinets makes a huge difference to the sound character so, while there could perhaps be a few more amp types on offer, having only eight to choose from really isn’t a limitation in practice. I tended to dial back the highs on some of the factory presets when using a Telecaster but, again, that is very easily done either with the ‘amp knobs’ or the master EQ.

If you want an approachable, good‑sounding pedal that does both amp and speaker emulation but you don’t want the cost or complexity of additional effects, the IR‑200 really does have a lot going for it.