This new ethnic percussion library features 12 themed folders, each containing loops designed to be layered together and sharing a common nominal tempo. The folder tempos span 72 to 200 bpm, but the inclusion of REX files (in addition to Apple Loop and Acidised WAV formats), expands your options well beyond this. 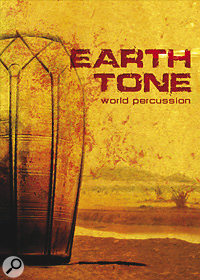 The performances come courtesy of Jamey Haddad, who has apparently played with artists such as Paul Simon and Herbie Hancock and, on this evidence, I can imagine why he caught their ear. He's the type of percussionist who seems to be able to pick up just about anything and make it sound like a living instrument, such that this library is much more inspirational than a lot of other ethnic loop collections I've auditioned. He blazes a trail across more than 30 instruments, including stalwarts such as cabasa, djembe, shakers and timbale, as well as more intriguing customers such as Hydraulic Triangle, Ocean Drum and Heco Heco. Never mind that some of these sound like a rusty mudguard; Jamey's creative use of natural pitch‑bend and elaborate ghosting, rolls, ruffs and shakes transform even the most lowly of them into something inspirational and attention grabbing. The talking drum and djembe loops are fantastically musical, a highlight of the collection, and I also found the handful of 'homemade drumkit' loops great fun.

The recordings themselves have an endearing, and not altogether inappropriate, lo‑fi quality to them (almost as if they were recorded on location on a dusty and deserted African roadside!) and regularly feature an atmospheric, wide‑stereo perspective, which is quite immersive to listen to and can really add air to sterile MIDI drum parts. There are frequently extraneous background creaks, shuffles, wheezes, rattles and buzzes involved, which lend a sense of rootsy autheticity to the proceedings, although snatches of click‑bleed do undermine this somewhat on occasion, and this might make some of the loops tricky to use in some more exposed arrangement applications. In addition, the general presentation is quite ambient, which may undesirably limit your mix options when layering percussion into upfront‑sounding productions.

My biggest concern, though, is that the timing of some of the loops is really quite loose. On the plus side, this gives them an essential humanity, which can often be lacking in programmed parts, but even when layering loops from the same folder the resulting groove often felt a bit unconvincing to me. So, if you're trying to add one of these loops to an existing production, you may need to tighten up the timing via the REX-file slices to get a good lock‑up between the layers. Points off, too, for the absence of instrument one‑shots, and for including no information in the filenames beyond the instrument name and tempo. In short, this is a highly inspirational and evocative library that falls down somewhat on rhythmic accuracy, recording fidelity and flexibility of use. Mike Senior