Is there more than an eye-catching new livery to spark interest in Blue's latest mic? 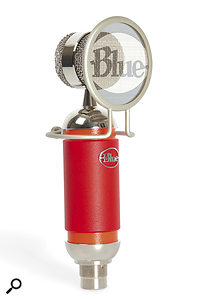 The latest Blue mic we've been sent for review is, in fact, bright orange! The Spark looks like it could be something of a bargain, too, because it comes in at an entry‑level price, complete with a pop shield and shockmount, and everything's nicely presented in a wooden storage box, along with an instruction booklet that also includes some useful miking advice.

Other than in the choice of colour, the Spark follows a familiar Blue cosmetic theme, which is to place the capsule in a saucer‑shaped basket supported above the main body of the mic. The purpose‑designed, large-diaphragm, cardioid-pattern, capacitor capsule is teamed with conventional Class‑A discrete FET circuitry, and although the capsule size isn't detailed in the specifications, it looks to be around an inch in diameter.

The mic's sensitivity of 28mV/Pa is comparable with other side‑address capacitor mics, and it can tolerate SPLs of up to 128dB, which should be fine for all of its intended applications. The Spark also has a fairly low noise figure, at just 10dB A‑weighted, and requires the usual 48V phantom power to operate.

The overall frequency response is quoted as 20Hz to 20kHz, and the response curve shows this to be within ±5dB up to 15kHz. Its response is nominally flat, but with a very slight mid‑range dip: there's no dramatic presence peak (maybe a dB or two of lift in the 5‑12 kHz range and an even lesser bump at around 1kHz, but that's about it), so the mic sounds pretty natural, but it retains the capacity to flatter and enhance vocals in a quite subtle way.

Intriguingly, the Spark incorporates something Blue call a Focus Control, which they say allows the user to switch between two different tonal characters. Closer examination of the frequency-response plot shows that in normal mode (with the switch out), the mic has an increased low‑frequency sensitivity, adding a couple of dBs of lift at around 80Hz, whereas engaging Focus rolls off the low end below around 120Hz. How this differs from a standard low‑cut switch I'm not sure, other than the low end being slightly boosted when the cut switch is not in use. The switch is located in the lower circular recess at the rear of the mic body.

The Spark's large-diaphragm, side‑address format and sonic character make it well‑suited to vocal recording. However, in the project studio, where you can't always justify buying different mics for different jobs, the Spark is also capable of producing good results as a drum overhead (you wouldn't normally use this type of mic for close‑miking individual drums), and on acoustic guitars, pianos, wind instruments and most other conventional instruments.

There are a couple of physical aspects of the kit that are worthy of note, specifically the pop shield and shockmount. While being very neat and unobtrusive, the pop shield sits very close to the microphone grille, so it isn't always as effective as a larger screen placed a couple of inches away. I encountered popping on a couple of my tests, despite the shield being fitted, so you may find a separate pop shield necessary with some singers. I also found it quite difficult to tighten the shockmount swivel joint using the small thumbscrew, and if you don't tighten it enough, the mic is likely to droop in the middle of a performance. Other than that, though, the shockmount is secure, well made and as effective as pretty much any elastic suspension of its type. 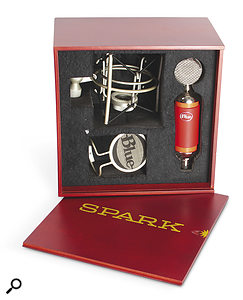 On vocals, the Spark delivered a well‑balanced sound with just the right amount of presence, although with Focus set to normal it was occasionally prone to popping on my own, careless plosives, unless a separate external pop shield was used. This will, of course, vary depending on the singer. There was certainly nothing about the sound quality that gave away the fact that this is a low‑cost microphone. The low end, for example, came across as very warm and full, but without sounding muddy. With the Focus button pressed in to reduce the low-end sensitivity, any proclivity to popping disappeared, while the reduced low-end contribution gave the mid-range and high frequencies more of a chance to shine through.

At first, I wondered if the Spark's good sound quality might just have something to do with the rather lovely Rupert Neve Portico preamp I'd been using for the tests, but when I switched to the mic preamps that are built into my M‑Audio interface, it produced a vocal sound that was generally similar, and only marginally less well focused. Sticking with the M‑Audio preamps — because they better represent the calibre of preamp that will be typically used with this mic — I also got very respectable results when recording acoustic guitar: the warm low end was nicely balanced by a detailed top that didn't become harsh or strident. Hand percussion also translated well, sounding detailed without over‑emphasising the attack, and with the mic picking out all the subtle tonal nuances of the dharbuka when played lightly with the fingers. I'm sure this is due to the mic having only the gentlest of presence peaks, and it is this lack of excessive coloration that makes it so versatile.

There are several good microphones in this price range, including the Audio‑Technica AT2020 and the SE Electronics SE 2200A, but the Spark is definitely a strong contender. It balances good overall sound quality with striking visuals, good accessories and an attractive price. I like its no‑nonsense, not overly‑coloured sound, robust low-end and capable vocal handling, and in most cases the included pop filter will probably be fine as long as you press in the magic Focus button when working with persistent poppers. I also felt myself warming to the rather more coloured orange livery! If you want an affordable and flexible studio mic that stands out from the crowd, this is one you'll want to put close to the top of your short list.

There are many low‑cost condenser mics around these days, including models by MXL, T‑Bone, SE, Studio Projects, Prodipe and Audio‑Technica that fall into a similar price range. The usual caveat applies: buy the one that best suits your voice!

A versatile mic, ideally suited to the home-studio owner who needs one mic to handle vocals and other sources. The lack of excessive coloration means it's likely to work well with a wide range of vocalists.