Designed by Sonicsmiths and released through Big Fish Audio, The Foundry is a Kontakt 5 virtual instrument that is aimed most obviously at sound designers. And while The Foundry is most definitely built around a library of samples — it’s a 12GB download that un–compresses to around 19GB — this is not just another collection of ‘spacey scary pad’ or ‘metallic hit in a warehouse’ presets. In fact, when you open the library within Kontakt, there is just a single patch to load. 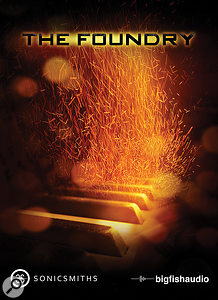 Don’t worry, though, as The Foundry can do all the atmospheric pads, textures, beds, pulses and hits that you require (as well as a number of other things) but you access those sounds using a custom–designed Kontakt front–end and something called the Adjective Assignable Randomizer Engine (AARE), which is a rather novel twist on the sorts of sound browser category filters often found in virtual synths or sample–based instruments.

Using the AARE panel, the user can specify a number of terms that describe the nature of the sound they are looking for but, once done, and you press the Randomize button, instead of The Foundry then offering you a selection of presets, it actually creates a new sound for you, built from up to four of the underlying samples and the various effects/processing options also included. You can then flip over to the Performance panel and experiment further by adjusting the properties of the four samples used, applying master effects and, via an XY panel, adjusting the balance between the four elements upon which the sound is built. The XY panel can be automated and the automation reproduced whenever a note is triggered.

A third level of controls allows you to dig in to each of the four sound elements in more detail, adjusting their individual processing options and accessing a 16–step sequencer if you want to create rhythmic effects. While The Foundry doesn’t ship with presets — the whole idea is that the software uses its clever algorithms to design new sounds to fit your descriptive criteria — you can save your own creations as Snapshots for later recall.

Having lost a number of hours letting The Foundry take me on a sonic journey, the bottom line here is that this instrument is an almost endless source of unique sounds. It allows the user to put in as little, or as much, effort as they desire into the sound design process, and the sound palette is hugely diverse, spanning pure ambient sound design through to some very interesting melodic or rhythmic instruments. This is an inspiring, flexible and creative software instrument.

There are plenty of ‘sound design’ sample libraries out there and, at this price, The Foundry is unlikely to represent a casual purchase. However, for working media composers looking for some new sonic inspiration, the somewhat novel approach to the way the sound design process is initiated (thanks to AARE) and the detailed and creative suite of tools for sound shaping make The Foundry quite a place to work.