Fuse is a Kontakt instrument that serves as a music ‘workstation’, but with a distinctly urban slant. It occupies a substantial 9.42GB when installed and, of this, a fair proportion of the samples are in-your-face synths and basses, with conventional instruments given supporting roles. 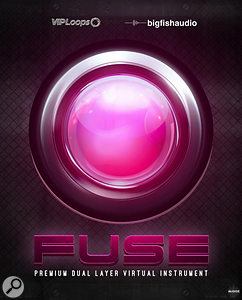 Fuse is bundled with 471 patches, categorised then divided into ‘Single’ and ‘Dual’ layer types. At the centre of the user interface, a large gold knob is used to crossfade between two possible tones, colour-coded blue on the left, pink on the right. Thus, the only real distinction between Single and Dual is that, in the latter, there’s always a blend of two tones selected. However, it takes only seconds to transform any Single patch into a Dual and vice versa. Editing is fast, uncomplicated and well worth the effort thanks to a single-screen UI that features a selection of 128 multisamples, six filter types, sync’able LFOs and three envelopes for each tone — surely enough tools to satisfy the time-pressed commercial composer or impatient hip-hop producer. Toggling from ‘Chief’ to ‘Pro’ modes is required to reveal the envelope and LFO controls for each tone, otherwise everything is right in front of you at all times.

Scrolling through the patches I was struck by the brash, slightly aggressive quality of many of them. Although graininess is added by the drive and lo-fi processor within the patch, in many cases it can be traced right back to the original samples too. So if you’re partial to synths and leads with cutting, edgy characteristics out of the box, Fuse could be just the ticket. In contrast, a selection of generic pianos and electric pianos confirm that ‘clean’ isn’t ruled out either. These sit alongside a small selection of orchestral strings, a few brass samples, some guitars and several excellent organs, but the choice isn’t extensive and is always limited to an urban context. It goes without saying that you won’t find ‘uncool’ instruments such as flutes, clarinets, dulcimers or harps. Also, given the expected genre/usage, it’s of little surprise that the samples aren’t always looped perfectly and have a ‘quickly grabbed’ feel to them, as if they’d been made on an Akai MPC.

Being able to quickly tweak and blend two sounds can yield plenty of fresh patches to supplement those supplied. At the top of each tone window you’ll find ‘Pitch FX’ and ‘Stutta FX’, their presence another indication of the expected target market. The first of these produces instant pitch drops over one or two octaves, plus a selection of modes to cover the pitch swoop direction and rate of drop. Stutta is a ready-meal version of side-chain simulation and other pumping, throbbing, gating and chopping functionality. There isn’t much to say other than it performs as expected over a range of quarter to 1/64th notes. The last ‘per-tone’ function is ‘reverse’. Simple in principle, it reverses the waveform’s playback, but it does extend Fuse’s versatility quite a bit; it quickly led me into creating some playable ambient ‘forward & backward’ piano patches, for example.

To finish off, a series of tabs along the bottom reveals effects such as compression, EQ, reverb, delay and tape saturation, with a neat but effective arpeggiator thrown in for good measure. Whilst the tape saturation is rather too gritty and abrasive for my personal tastes, it’s hard to fault any of the others for sound quality or ease of use.

To sum up: Fuse isn’t going to appeal to everyone. At its best it delivers a solid selection of raw-sounding synths and building-wobbling basses but, given the rather limited palette, seems rather expensive. However, the interface is a doddle to navigate, the effects are fine and the ‘instant urban’ qualities, plus the simplified tools for adding pitch drops and stutters, are bound to appeal to some. For the rest of us, it could have a hard time competing with the synths and sample libraries that are shipped with most popular DAWs.