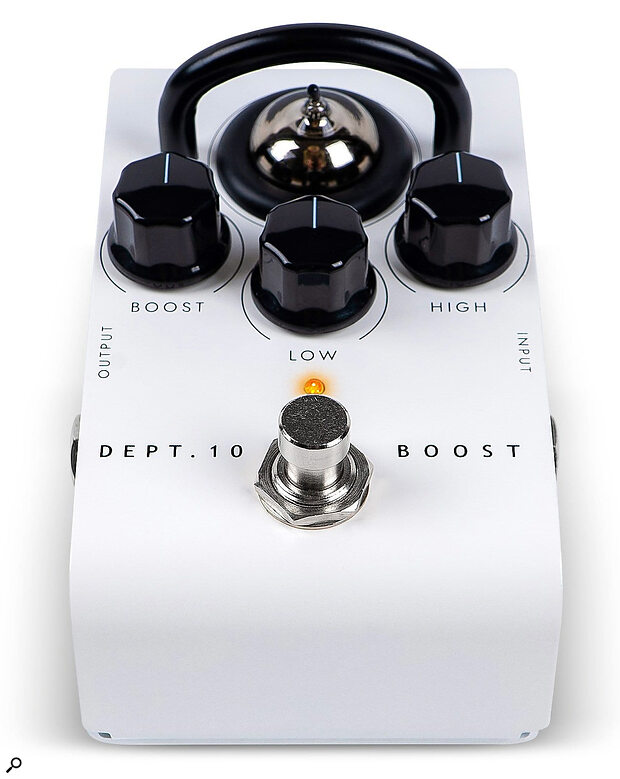 Blackstar Dept. 10 Boost is part of a series of Dept. 10 pedals that use full‑voltage, dual‑triode valves to provide the touch responsiveness of a valve amplifier. A 9V, 500mA PSU is included and internal circuitry converts this to over 200V, so as to run the valve within its optimum operating range. Conceptually, the pedal is very simple, providing gain boost and EQ, along with a low output impedance capable of driving long cables without suffering tonal loss. In this respect, it does the same job as a buffer pedal but with the added functions of adjustable gain boost and EQ.

Built into a tough steel case, the pedal has jack ins and outs plus a PSU socket. The top of the ECC83 valve protrudes through the top of the case but is well protected by a metal ‘roll bar’. The leftmost control adjusts the amount of boost, which goes from unity gain, and though the included info sheet doesn’t specify exactly how much gain can be added, it seems to be in the order of 12dB with the EQ set flat and Boost set to maximum. It is enough to push the front end of an amplifier to add some hair to the sound, though you may simply want it to add a bit of volume for solos.

A 9V, 500mA PSU is included and internal circuitry converts this to over 200V, so as to run the valve within its optimum operating range.

The tone controls, Low and High, are based on a passive circuitry described as James‑Baxandall. Essentially this is a passive interpretation of the active bass/treble EQ invented by UK engineer Peter Baxandall and is similar in topography to the passive EQ tone stacks used in many valve amplifiers. There’s plenty of range here, so you can drop the bass and turn up the highs, then add some boost to emulate a genteel treble booster if you need to. With the EQ controls close to centre, the natural sound of the guitar comes through smoothly and, used with my solid‑state guitar amplifier, the overall tonality sounded pleasingly transparent with a great playing feel, especially if just a modest amount of boost was dialled in.

Plugged into my audio interface, the Dept. 10 Boost improved the sense of touch responsiveness and made recording clean guitar parts a joy to do. It also works well for feeding amp simulators, in which scenario the EQ is useful in dialling in the right kind of amp overdrive. That valve definitely ads a touch of old‑school magic.