One of my favourite effects units is an mid‑to‑late '90s brown Fender '63 Valve Reverb reissue. Bought in the days when I owned a couple of original brown Super and Pro amps, it now finds itself driving my '64 Deluxe. A major part of my reason for liking it is that its warm valves and 'sproingy' springs never seem to fail to make my guitars sound good, no matter which style of music I'm playing. Reverb is one of those natural‑sounding effects that effortlessly fits into every style of music, and the original 1963 Fender Valve Reverb arguably gave birth to the USA West Coast's '60s surf-music scene. 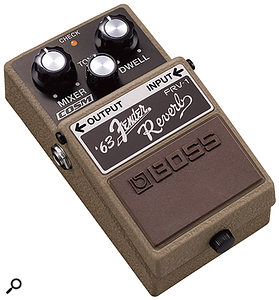 Developed in partnership with Fender, the Boss FRV1 Vintage Fender Reverb pedal (£115$130) uses Boss's proprietary COSM (Composite Object Sound Modelling) technology to recreate the sound of the brown Fender Valve Reverb. In a touching homage to the original, even the colour scheme and legending is carried over in the FRV1's cosmetics.

The form factor is the Boss pedal norm, and the controls are those of the original — Mixer, Tone and Dwell — although they're laid out in the 'wrong' order. Set out logically (in their original order), Dwell sets the drive into the springs, Mixer sets the wet/dry balance, and Tone cuts the high frequencies coming from the springs, to stop everything from sounding too splashy. The FRV1's knobs accurately emulate the actions of the originals, and the resulting reverb is a very close approximation of the Fender's warm, all-encompassing, twangy tonality, and its range, which can go from the subtlest of background jazz shimmers to the total wet madness of full‑on surf, via all points in between and beyond. 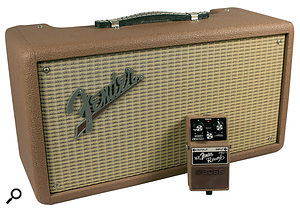 The Boss imitation next to the reviewer's Fender '63 Reverb reissue: which would you prefer to carry to a gig?I've said 'close approximation' quite deliberately, because to my ears — despite its extremely convincing tone and spring response — the FRV1 sounds somewhat less dynamic than the original that it seeks to emulate, and therefore, when A/B'd directly with the Fender, it doesn't quite manage to match the almost three‑dimensional character of the real thing. However, when I wasn't doing direct A/B comparisons I forgot all about this shortcoming after a couple of minutes of playing time on the FRV1, and I certainly know which one I'd prefer to carry to my next gig.

That's the raison d'être of the Boss FRV1 Vintage Fender Reverb pedal: you get all the good bits of a '63 Fender Valve Reverb in a package that you can shove in your gig‑bag, stow in the back of your amp or stick onto your pedalboard. I'd say that we're pretty much all set for a surf music revival... all we need now is someone to come up with the matching SCSW1 pedal that will model a summer in Southern California. Bob Thomas

The closest thing you can get to a real Fender reverb in pedal format, the FRV1 gives a convincing representation of the original device, although arguably it is a little less dynamic.